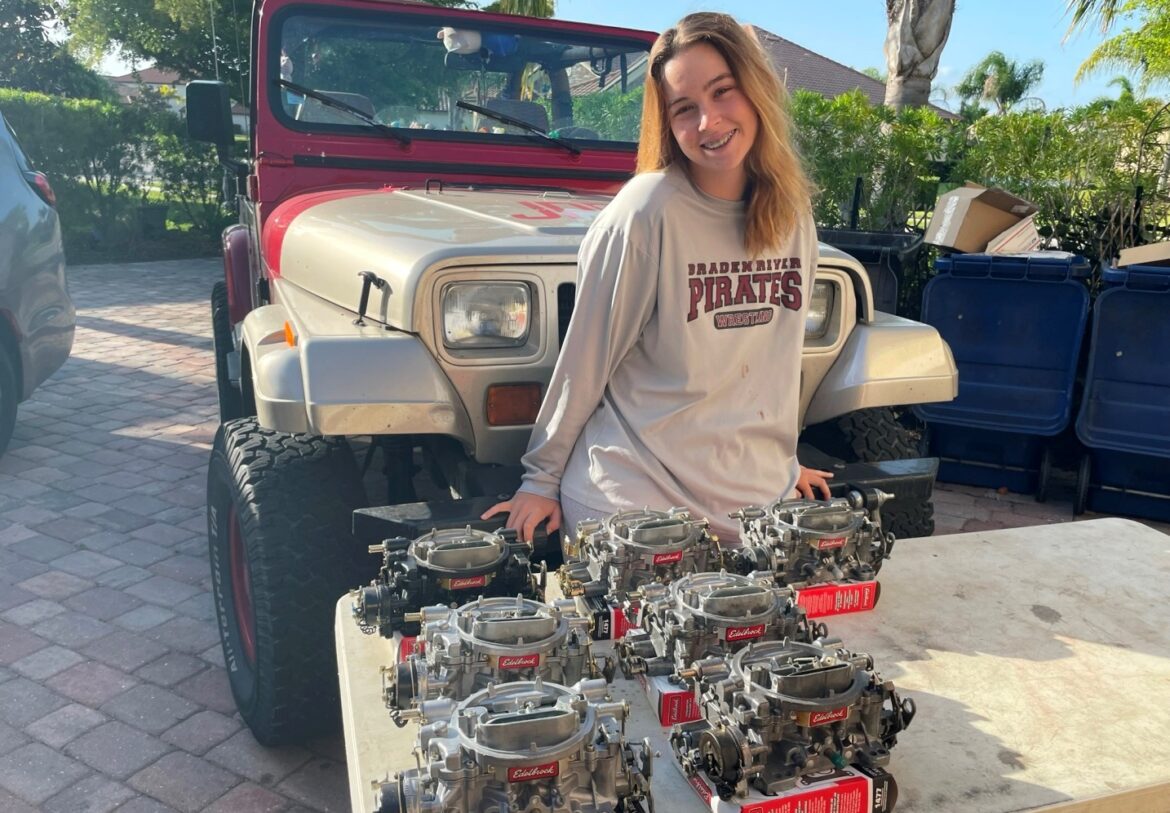 Riley is a 17-year-old high school junior who has a part time job with a difference. Riley rebuilds carburettors from all over the world and in the past three years estimates she has rebuilt around 250 of them. From what started as a means of saving for her first car has now become a successful online business for Riley.

From the time she was born Riley has spent time with her dad in their garage watching, listening and smelling mechanical stuff as he worked on various classic car or old motorcycle projects.

“Dad would roll my high chair out there or put the play pen in the garage and I now have a weird love of the smell of gas and carb cleaner,” said Riley laughing.

At around the age of 14 Riley started thinking about what her first car would be, imagining something like a Nissan 280Z or Mazda RX7 and she asked her parents what they would buy for her? Riley’s dad replied, “he would not buy my first car, but that he would match any money I made and I had to buy my first car…” Riley’s reply was, “How can I make money?”

“Dad brought me out in the garage and he started having me restore old take off parts from projects long gone, then selling them on eBay. Like polishing old instrument clusters, and cleaning up Harley parts, and selling them. He had a few carbs sitting around and he taught me how to rebuild them, and they sold easy and fast on eBay and Facebook Marketplace,” said Riley.

Riley took the money she had earned and bought more old carbs off Craigslist and built those with her dad. Riley would call and email people all week off Craigslist for old carbs and she would drive with her dad all around Florida on the weekends buying carbs, then rebuilding and flipping them. After about a year and a half Riley had enough to buy her first car, a 1995 Jeep YJ manual.

A slow Jeep with bigger tyres, making if even slower, with a roll cage and two seats (as no one really sits in the back) was decided by Riley’s parents to be the best for her first car. Riley’s dad made sure it was a manual transmission because her mum said she wanted Riley to be able to drive any car. But now Riley knows it is because you can’t text and drive when you have to shift gears. Smart thinking by her mum, if you ask me!

“It was a solid Jeep, but the paint was really bad and as any Jeep person will tell you, Jeeps are expensive. They are like the barbie dolls for adults, you want to change the dress, and shoes and everything,” Riley continued.

From then on, the money earned from carb rebuilds went to buy parts, bodywork and paint for her Jeep. Riley worked on the Jeep with her dad, in a friend’s shop, for about six months and had her first car for High School.

The Jurassic Park theme idea came from a friend of her brother’s, who said boys would like a girl who drove a Jurassic Park Jeep. There is a Facebook group called the Jurassic Park Motor Pool and they have every colour, option and layout diagram already done. Riley’s Jeep has an outside speaker and roars, and plays the theme song and voices from the movie.

“I love pulling up to stop lights and seeing the little kids point out the window, then I Roar at them and they get wide-eyed and laugh, and we all laugh… Gas stations are fun too,” smiles Riley.

Finding the time to work on the carbs while also balancing School, playing competitive soccer as a goal keeper involving a lot of travel, spending time with family and friends, having fun, and boys is the biggest challenge for Riley. The carbs keep arriving from Riley’s eBay rebuild services advertisement and she has to turn them around in 10 days. Riley’s favourite rebuilds are big dual quad tunnel ram carb setups and the best one she has completed to date was actually shipped to Australia!

“My dad watches and oversees the reassembly, because of the real small and finicky things that have to be perfect for them [carbs] to run right. When we have a new type of carb, we go on YouTube and watch a bunch of rebuild videos. There are a dozen videos on every type of carb.

The older generation is afraid this is a dying art or craft, because the knowledge is going away. I think anyone who wants to learn has an unlimited number of teachers online. You do not have to know every detail, option or motor available in a particular model car to call yourself a car person. You just have to like cars,” explains Riley.

Freedom from a job is what Riley loves most about rebuilding carbs, being able to build when she wants to at weird times and the flexibility of ramping up or slowing down to suit her schedule. Riley’s friends help out sometimes as well and she is able to pay them more than they earn in their afterschool jobs at Subway or Publix

“I love the reaction I get when I tell people my business is Carburettors, they love it and are always like WOW! It is a real ego boost. I am so excited to get something back [to the owner] that might get a project moving again. I love doing things for other people. When someone trusts me to rebuild their carb, I understand that and am honoured,” adds Riley.

Riley’s parting wisdom for Driven Women Magazine is, “It’s NOT hard, working with tools is not hard and learning is not hard. You can learn anything from YouTube. Oh, and a great tip to save your nails, scratch a bar of soap when you walk in the garage, the grim will wash out from under them easier.”

If you want to check out Riley’s work head to her Facebook page Riley’s Rebuilds.