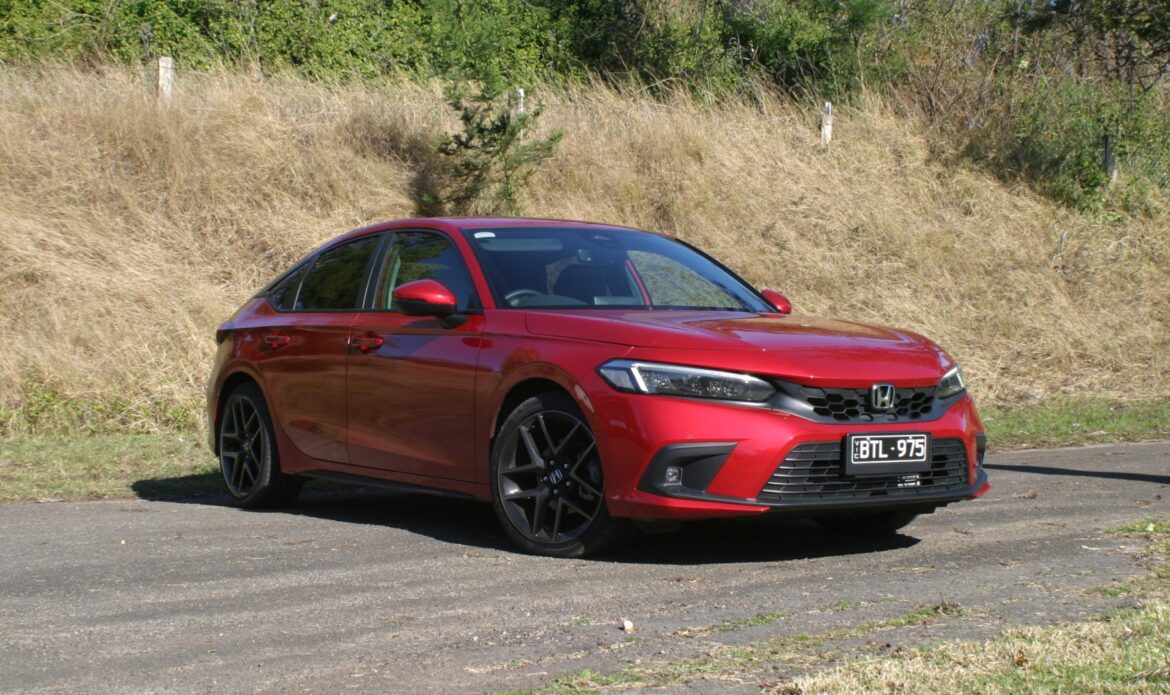 The Honda Civic was first released in 1972, back when Intel invented the single-chip microprocessor and just before the first world oil crisis in 1973. Fifty years later and you can expect to find approximately 150 microprocessors in the average new vehicle, the cost of petrol is still discussed almost on a daily basis and Honda has released the eleventh generation of the Honda Civic hatchback.

Available in Australia in just one spec, the VTi LX, and for a fixed price Australia-wide of $47,200 drive away, therefore the only choice you will have to make is which colour you would like for the sweeping curves of your Civic to be. I recently drove a Premium Crystal Red (Metallic) Civic to find out why this hatch has had such a long life and sold over 27 million units since 1972 as of 2021.

This Civic has a 1.5 Litre, In-line, 4-cylinder, turbocharged petrol engine with 131kW of power and 240Nm of torque. The engine is paired with a Continuously Variable Transmission (CVT) and drive is sent to the front wheels. The official combined fuel consumption is 6.3L/100km and for my week I used 8.7L/100km.

I found the ride in the Civic comfortable, acceleration adequate and in a straight line that there was very little loss of traction from the front tyres. There are three drive modes available, Eco, Normal and Sport, with the latter being the most fun. In Sport mode the engine revs almost to the 6,500rpm redline but even then, there is not a lot of vocals from the exhaust. The CVT can also be ‘manually’ changed with the plastic steering wheel-mounted paddle shifters.

The interior of the new Civic has a sporty feel thanks to the lovely leather steering wheel, leather shift knob and alloy sports pedals. The black leatherette seats with accented suede and red stitching are nice to look at and sit on. The front seats are heated, with the driver’s seat getting power adjustment for recline, forward/back and seat height front and rear, while the passenger seat only has recline and forward/back adjustment.

My favourite feature in the cabin was the air vent design with the toggle direction controls and the continuation of the design shape across the entire dash. I was less fond of the temperature settings on the climate control though because on more than one occasion the air blowing out was either full hot or full cold regardless of what temp I had the system set on.

There was also an issue with my Bluetooth phone connection as it would connect to the Civic and then drop out almost immediately and eventually, I gave up trying to connect via Bluetooth at all. Android Auto also took a couple of attempts to connect to the 9” touchscreen infotainment system. Apple CarPlay can be connected wirelessly, but I did not try this out. Voice control is activated by pressing the button on the steering wheel with the masculine looking silhouette on it and you need to save voice tags in order to operate it.

The audio system in the new Civic is a Bose premium sound system with 12 speakers including the subwoofer and Dynamic Speed Compensation. Media sources include AM/FM, DAB+, USB, Bluetooth and smart phone with two USB ports and one 12V outlet located at the front of the centre console next to the wireless charging pad.

For me there was ample leg room in the rear seats of the Civic and head room was OK, but may be a little tight for taller individuals. For younger passengers there are two ISOFIX/three rear tether child seat restraint points, but really only enough room for two car seats due to the width of the Civic. It is also worth noting that the centre rear tether point is located on the boot floor, rather than behind the seat, so the length of your tether strap may need to be checked.

The centre seat can be folded down as an arm rest with two different sized rigid cup holders at the front of it. There are also good-sized drink bottle holders in the rear door cubbies and the front door cubbies as well. The two central rear air vents with manual air speed on/off controls and direction controls and most importantly carpet floor mats that even go over the transmission tunnel.

The tailgate is power assisted for easy lifting and the boot of the Civic is a good size and has a handy folding floor that creates extra storage space. The tyre repair kit is neatly packed in the side of the boot and there are four tie down points, one hook and a light in the boot. The cargo cover can be rolled away to the left if not required. While for longer items the rear seats have a 60:40 split folding mechanism.

All new Honda’s sold in Australia come with the Honda Road Ahead Guarantee that includes a five year/unlimited kilometre warranty, five years Premium Roadside Assist, and five years map updates for the satellite navigation system. Plus, owners have the confidence of five low price services for just $199 each (some conditions apply, see the Honda Australia website for more information). For the new Honda Civic the service schedule is every 12 months or 10,000km, whichever occurs first.

The Civic is one of only four vehicles available in the Honda Australia model line-up and the only small vehicle. With its long history and popularity among enthusiasts, the new Civic has a lot to live up to. Thankfully then, the new Honda Civic has a good looking exterior and interior design combined with fun little engine. This all bodes well for the next-generation Civic Type R to take these core values and turn them up to 11! Visit your preferred Honda Centre or build and price your new Honda Civic online.