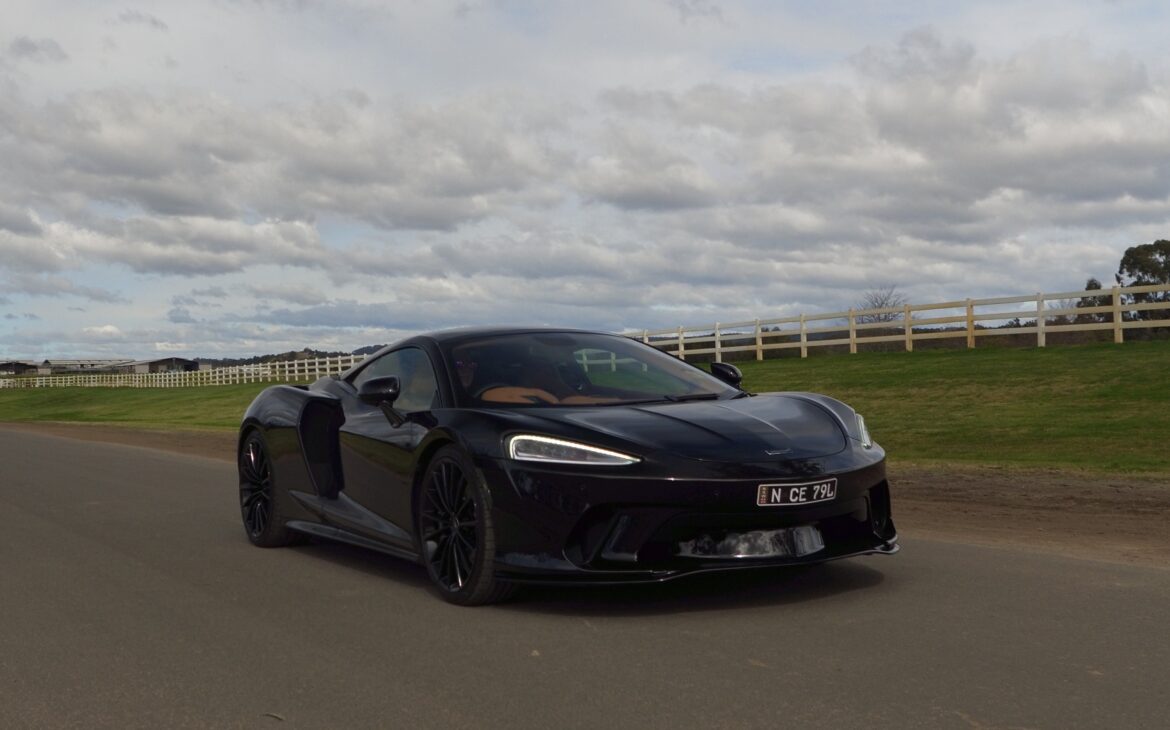 Humans are an intricate blend of atoms and molecules and our individual chemical makeup is as unique as our fingerprints. Our activation energies are different, so the amount of energy that is required to stimulate these compounds to a condition in which they can undergo a transformation to physically or emotionally transport us, are diverse as well.

In chemistry a catalyst is used to increase the rate of this reaction by lowering the activation energy, and in the process, the catalyst regenerates itself. The ability to speed up, slow down and restore energy in the same action makes the properties of a catalyst most intriguing.

McLaren is the thinking woman’s, or man’s, supercar company and in my opinion the McLaren GT is currently the best-looking vehicle in their model line-up. In this optional Black Ignot metallic paint ($10,460), which has a beautiful bronze fleck through it, combined with the optional MSO Black Pack ($12,540) including the gloss black 15-spoke forged wheels, my limbic system was stimulated by this particular GT even before I got behind the wheel.

The V8 engine is mated to a slick 7-speed SSG transmission, which can be used in manual or automatic mode. To engage Manual mode, you can either press the Manual button on the centre console or if you are in Auto mode simply pull up on the absolutely stunning metal wheel-mounted paddle shifters. The paddle shifters are almost knife like both in their appearance and the precision with which they allow you to shift through the gearbox. Once you have finished having your fun slicing up and down the gears, the transmission will revert back to Auto. There are no nanny state computers on the McLaren either, so if you pull down aggressively through the gearbox the GT will oblige all the way to first gear, so some finesse is required so as not to overstress the engine.

Driving the McLaren GT certainly got my nerve endings tingling as I had the sense that the GT was alive underneath me! Turn the music off and you can hear the whistling of the turbos under hard acceleration and feel the rigidity of the carbon fibre tub. Once I had some fun and the McLaren GT safely parked back in the garage the fans continued to blow, slowly returning myself and the GT back to an even state. Here I couldn’t but help admire the view from the side mirrors of the gaping air intake just behind my ear.

The fans were blowing hard because I discovered how easy Launch mode was to operate. Simply put your left foot on brake, press the launch button, right foot hard on accelerator approaching the 8,000rpm red line, lift off the brake and Holy Toledo Batman, that is one heck of a ride! The GT did lose traction in first and second gear when I used launch control in the dry, but the GT remains in a straight line delivering linear, seamless and relentless acceleration.

For both the handling and powertrain controls there are three modes available on the GT, Comfort, Sport or Track. You select these via two separate knurled aluminium knobs on the centre console and confirm by pressing the Activate button. To engage drive you press either the D or R button on the centre console and it is worth noting the GT does not have Park, so you must apply the electric park brake once you have placed the GT into Neutral otherwise it may roll away.

The suspension, steering and brakes are all bespoke to the GT and I thought the brakes were reassuringly firm under foot and the steering was solid, but the GT does have a poor turning circle. I found the ride in the GT to be comfortable regardless of the handling setting I chose to drive the McLaren in. Of course, as you go up the powertrain settings the matte black Sports exhaust becomes louder, but nothing that the average person would find offensive.

To open the scissor doors from the outside you simply press a lever and the door rises just enough for you to slide your fingers underneath it and with the gentlest of flicks the power assisted door rises up. To close them you simply pull down on the door and gravity takes over. To exit you lift the door handle and give it a gentle nudge with your elbow, like you’re trying to get your partner’s attention, and the power assistance does the rest.

Getting into the McLaren can be elegantly achieved thanks to the padded upper part of the sill that you can sit on and then slide yourself in and out of the GT. I also liked that the sill can’t be scratched by your shoes as you step in and out because it is covered with carpet on the lower part. A further demonstration of the attention of the attention to detail that McLaren has paid to the design of the GT.

Where this McLaren most reflects the traditional Grand Tourer is on the interior. As part of the Luxe Trim level, which comes as standard on GTs sold in Australia, you are completely surrounded by Softgrain Aniline leather. This sweet-smelling Vintage Tan leather is used throughout the cabin on the roof, dash, door trims, transmission tunnel and the seats, which are heated.

If I had one complaint about the McLaren GT it would be the seat controls, they are hard to use because of their location at the front of each seat near the transmission tunnel. Being unsighted and with no indication via touch as to what seat element I was adjusting, I spent some time finding my ideal driving position. The GT could benefit from the designers either moving the controls or moulding raised dots on them so you could distinguish between the buttons, and the part of the seat they controlled, more easily.

McLaren deliberately have no controls on the steering wheel, so nothing distracts you from the job at hand, driving this exceptional supercar. The steering column has power adjustment (part of the Luxe Trim Level) with stalks located behind the steering wheel for the auto wipers, standard cruise control, and customisation of the digital driver’s dash.

The Android-based infotainment system is also a distraction free zone not only because it is easy to navigate, but because it is not compatible with either Apple CarPlay or Android Auto. A nice touch on the GT is the icon on the infotainment home button is an overhead view of the McLaren Technology Centre, the base for McLaren Automotive and their Formula Team. There are six ambient lighting colours to choose from and I liked how the shape at the front of the doors with the ambient lighting strip emulates the McLaren logo.

My GT was fitted with the 12-speaker, Bowers & Wilkins premium audio system featuring carbon fibre sub-bass woofers and Kevlar mid-range drive units, included as part of the no cost option (in Australia) Premium Pack. Media sources include internal storage, DAB/FM, AM radio and Bluetooth, with one USB port located under the arm rest to charge your phone. It also had the optional ($5,950) electrochromic glazed panel in lieu of the standard carbon fibre composite gloss black roof, that is darkened or lightened at the touch of a button and feels a bit sci-fi to use.

How practical is the GT to live with? Well, it has dual-zone climate control (with the silhouette of a racing car driver on it) and auto headlights that actually work like a ‘normal’ car, unlike another supercar I have driven. Plus, a standard rear-view camera that appears on the driver’s dash with front and rear sensors that are displayed on the central screen (part of the Practicality Pack). There three cup holders, one near the central arm rest fits a 600ml drink bottle and the two in front of the start button are narrower and there is also a slot here to store your phone so it doesn’t go sliding about in the cabin. It is easy to reach behind the seats to place your handbag if the passenger seat is occupied or if you are travelling light, simply place your wallet and the key into the pocket at front of driver’s seat. Finally, there is a small cubby in either door suitable for storing your sunglasses.

McLaren GTs sold in Australia all come standard with Practicality Pack, which includes a Vehicle lift that further raises the already high nose on the McLaren GT even higher to clear those pesky dips and humps (photo on right below shows the nose lifted up). The nose lift kit can be raised when travelling below 50km/h using the button on the stalk behind the right-hand side of the steering wheel and it will automatically lower itself when you exceed 50km/h or it can be lowered using the same button.

The 420-litre rear boot straddles the mid-mounted engine and is protected by special heat resistant material developed by the aeronautical industry. You can purchase a McLaren GT Luggage Set that consists of four pieces, the garment case, the weekend bag, the cabin bag and the full-size golf bag that has been specially designed for the GT’s boot space. The rear boot can be opened and closed from button under boot lid, key fob or button in the cabin. While the front boot opens from key fob or button in cabin and there is no annoying catch to release, just lift bonnet up. The front boot has 150 litres of storage and fitted eight of my grocery shopping bags in it, showing just how pragmatic the GT is.

All new McLaren models come with a three year/100,000km warranty, whichever occurs first that includes roadside assistance. The warranty can be extended up to 12 years and is registered in 12 or 24 month increments up until your vehicle’s 10-year anniversary (conditions apply). Something quite unique to McLarens is taking your car on any track day does not void your warranty, the only condition for owners is they must bring their car to a McLaren dealership for a pre and post track day inspection. The regular service schedule for the McLaren GT is once a year or every 15,000km, again whichever occurs first.

When it was launched in 2019, the McLaren GT promised to challenge the conventions of the Grand Tourer category by offering the engaging drive McLaren is known for, as well as the space, comfort and usability expected of a GT. After spending a weekend with the McLaren GT, I can say that it is a supercar that looks the part, prodigiously preforms, and has the polish of a Grand Tourer making it pleasant to live with.  The McLaren GT simultaneously excited me, reduced my stress associated with driving a supercar and left me with a lasting sense of happiness.