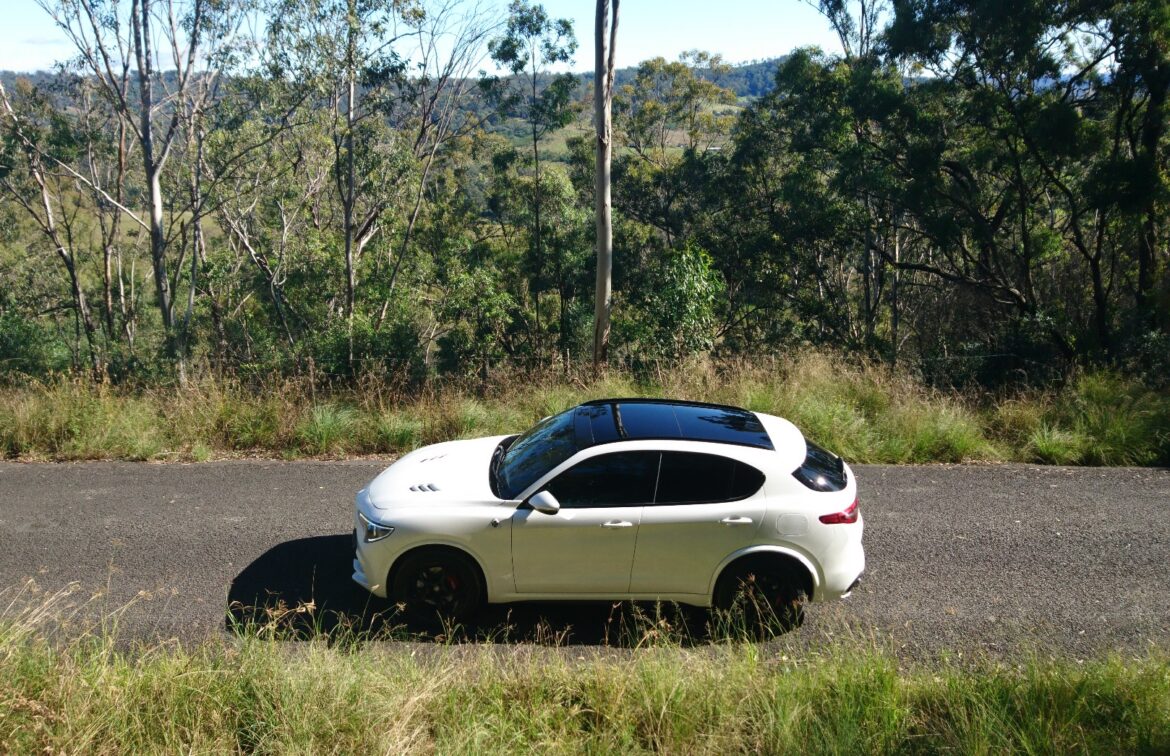 Located in Northern Italy, the Stelvio Pass is one of the highest roads of Europe and arguably one of the most scenic drives in the world. The almost 47 kilometres of automotive nirvana has 48 bends carving their way up the mountain and it could almost be described as a literal stairway to heaven for motoring enthusiasts.

It was with high expectations then that I was looking forward to my drive of the Alfa Romeo Stelvio Quadrifoglio. As the Stelvio is based on the very impressive Giulia Quadrifoglio, I knew this SUV would be something special, just like its mountain road namesake.

Even before entering the Stelvio Q, I was impressed and not just because of the optional Trofeo White (tri‐coat) metallic paint or external styling, but the key fob. The Alfa Romeo key fob is heavy and feels substantial in your hand and gives you the knowledge that the vehicle itself will be superior also.

Keeping all that power in check is the Alfa Romeo Q4 all-wheel drive system and the Alfa Active Suspension controlled by the Alfa DNA Pro Drive Mode. The Stelvio felt squat and planted on the road, egging me on to take the next corner just that little bit faster. The only thing that let the performance of the Stelvio down were the spongy Brembo brakes that were hard to modulate at slow speeds.

There are three standard driving modes, Dynamic, Natural or Automatic as and as you progress through the higher modes the ride becomes firmer and the exhaust louder. I spent most of my week driving around in N or D mode, and I found the ride comfort to be acceptable.

But to see what the Stelvio can really do, you need rotate the selector around just a little further to engage Race mode. Press hard on the accelerator and on upshift you are greeted by an almighty clap, like thunder. Keep pushing and the Stelvio rewards you more, clap, clap, clap, as the speed becomes greater and I was thunderstruck by the performance as I drove up my local ‘mountain’ pass.

Once you have finished exploring the athleticism of the Stelvio Q you can then take the time to appreciate the gorgeous cabin with its carbon fibre trim across the dash, door trims and centre console. This Stelvio is also fitted with the optional heated Sport Steering Wheel, with more carbon inserts and large red start/stop button. Behind this are the large metal steering column mounted gear selectors for ‘manually’ changing gears on the 8-speed automatic gearbox.

The black leather and Alcantara seats with green stitching and embossed head rests not only look great, but hold you in tightly for when you are exploring the higher performance capabilities of the Stelvio. Both front seats have power adjustment for recline, forward/back, seat height front and rear and 4-way lumbar support. They also have manual front seat extension, with the driver’s seat getting three memory positions as well.

The 8.8-inch infotainment screen is neatly incorporated into the overall dash design and is controlled either via the touch screen, rotary control selector on the centre console by pressing the voice control button on the steering wheel with the androgynous looking silhouette on it. For me the voice control only worked for changing a radio station and did not enable me to enter an address on the sat nav or make a phone call.

Apple CarPlay and Android Auto come as standard on the Stelvio Q, as does the 900-watt harman/kardon premium audio system with 14 speakers. Other media sources available include AM/FM radio, DAB+, Bluetooth, USB and AUX. To connect to the system there is one USB port, one USB-C port, one AUX point and a 12V outlet under the arm rest along with wireless charging for the key fob and wireless charging for compatible phones. At the front of the centre console between the two deep cup holders located under the very elegant sliding carbon fibre cover along with another slot for your phone and above this a 12V outlet and USB port.

The rear seats are as equally as attractive as the fronts, but I found the head and leg room to be tight. There are two ISOFIX/three rear tether points for child seats, but only enough room for two car seats to be installed due to the width available. The centre seat can be folded down as an arm rest with two grippy cup holders and a slot for a smart phone between them.

Rear passengers will enjoy the panoramic sunroof and have two central air vents with manual direction and open/close controls and below these are two USB ports and the controls for the rear heated seats. There are odd shaped cubbies in the rear doors suitable for a medium sized drink bottle and no mat over the transmission tunnel.

The Stelvio Q boot has a power operated tailgate with open/close controls under the tailgate, on the key fob and in the cabin. The boot is large enough for the weekly shop or a pram and a smaller shop or for extra space the rear seats can be manually lowered with a 40:20:40 split folding mechanism. Conveniently there are four substantial tie down points located on moveable rails, so you can hold everything securely in place. There are also two hooks, two lights, a 12V outlet and tyre repair kit under the boot floor.

The 5-star ANCAP safety rating for the Alfa Romeo Stelvio only applies to the 2.0 litre petrol and 2.2 litre diesel variants. The active driver aids available on the Stelvio Quadrifoglio include Adaptive Cruise Control, Lane Departure Warning, Active Blind Spot Assist and Autonomous Emergency Braking and there are also six airbags, dual frontal, side chest-protecting and side head-protecting (curtain) airbags. Other safety features include a standard rear-view camera with front and rear parking sensors, auto headlights, and auto wipers.

As of 22nd April 2022, all new Alfa Romeo vehicles now come with 5 Year / Unlimited kilometre factory warranty that includes 24-hour roadside assistance. The service interval for the Stelvio Quadrifoglio is 15,000km or 12 months and the cost for the first five scheduled services is $6,644 as calculated using the Alfa Romeo Australia website.

Coming to the Alfa Romeo Stelvio Quadrifoglio with high expectations was a risk, because not all vehicles live up to them. But for the Stelvio Q I can say that this SUV is worthy of its lofty name and should be considered if you are in the market for a performance SUV.