Who let the horses out? 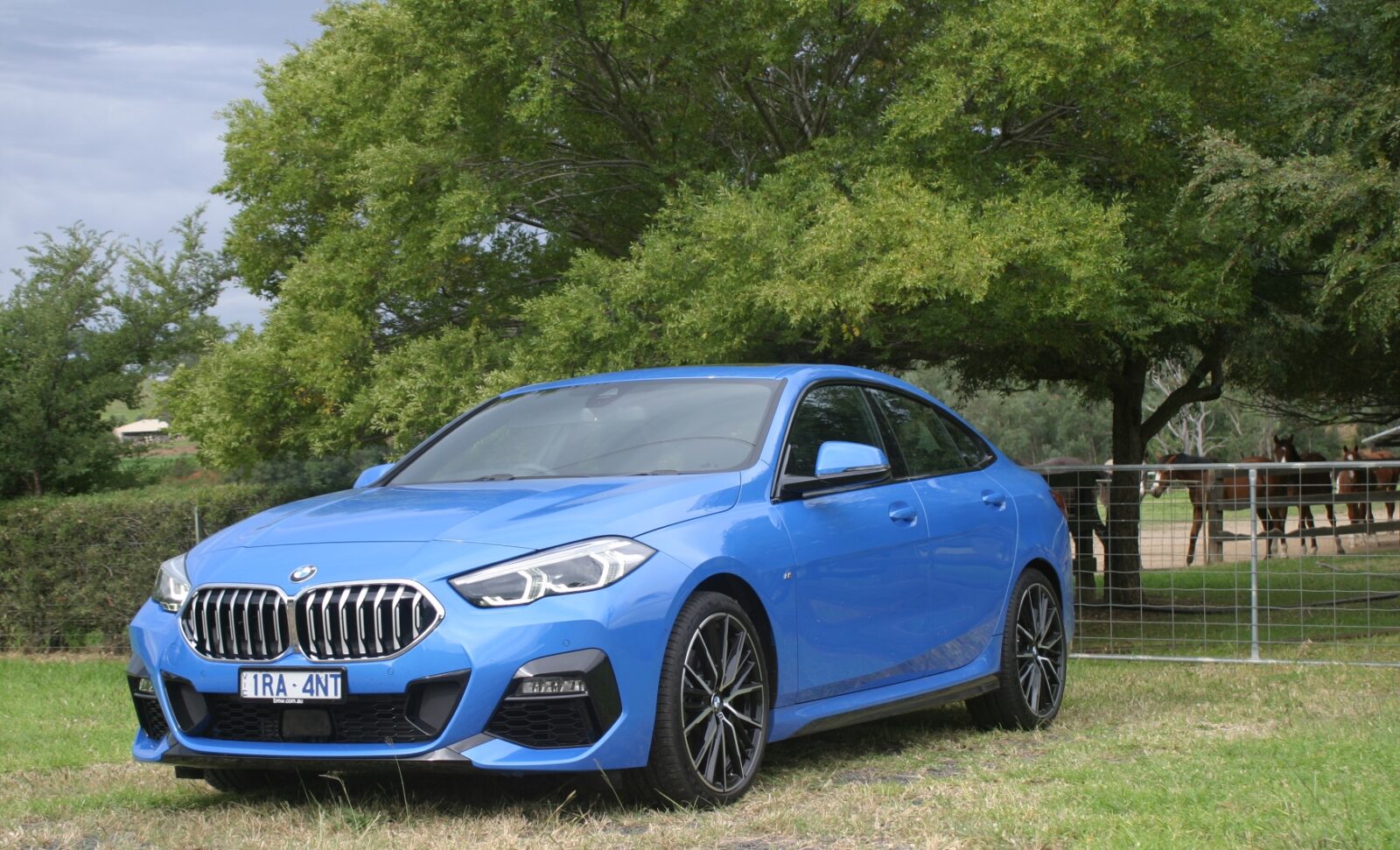 As I enter the garage to leave in the morning with the 218i Gran Coupé key in my pocket the little BMW lights up with the excited anticipation of a horse as you enter the paddock with a feed bucket and when I got closer the car snickered and unlocked for me. At night the experience is amplified as the door handles illuminate and the BMW puddle light shines on the ground to show the way to my ride.

Hit the start button though and the excitement for the driver diminishes somewhat, even though this particular BMW has the M Sport Package. Clearly some of the horses have escaped when I opened the gate because under the bonnet of the 218i GC is a 1.5 litre, 3-cylinder turbocharged engine with just 103kW of power and 220Nm of torque. It’s enough to induce some torque steer from the FWD system under hard acceleration, but the 0-100km/h canter takes 8.7 seconds. This combined with the lack of paddle shifters on the steering wheel for the 7-Speed double clutch Steptronic transmission dulled the driving experience of the for me in the four-door Coupé.

You do get three drive modes to choose from in the 218i; Comfort, Eco Pro and Sport. Sport mode is also configurable for steering, engine and transmission between Sport and Comfort settings. The ride of the 218i is a highlight and feels solid and comfortable even in Sport mode. As per usual I spent most of my time in Sport mode and this resulted in an average of 13.5L/100km of fuel used for my week, which is almost triple the claimed range of 5.4-5.7L/100km.

One feature I did like in the 218i was the cool ambient lighting strips across the dash and along the door that can be changed to one of six colours. The cabin is quiet and sitting behind the chunky steering wheel I found the driver’s seat to be snug fitting thanks to side bolstering and lumbar support, in addition to the other power adjustments. Taller people may find they have limited head room though, even in the lowest seating position. The front seats are heated (part of the Comfort Package a $2,300 option) and the driver’s seat has two memory positions, but the passenger misses out on these and side bolstering as well.

The 218i GC comes with the BMW Operating System 7.0 and features a 10.25” configurable instrument panel and a 10.25” infotainment display. The head-up display shows call and media info in addition to speed and guidance if you have a destination set. The voice control in the 218i works well for making calls and setting a destination and it even has a sense of humour. If the system doesn’t recognise your input after three attempts it says “Sorry, I am sometimes hard at hearing.” And rather than getting angry at the system for not understanding my input, it made me laugh. Owners will also be smiling because BMW have scrapped the annual charge for the use of Apple CarPlay and new car buyers get a three year subscription to Vehicle Apps including News and Weather, BMW Intelligent Personal Assistant, Real Time Traffic Information and Concierge Services.

I didn’t like the piano gloss black around the centre console because it shows finger marks badly and if this is something that bothers you, then I suggest keeping a micro-fibre cloth in the slim line arm rest. Thankfully though the buttons you press to access the infotainment system are matt black. At the front of the centre console there are two cup holders, one 12V outlet, one USB port and a ledge to securely place your phone, with wireless phone charging for compatible devices,. There is also a micro USB port under the arm rest and good drink bottle storage in the door cubby.

The rear seats have an OK amount of leg room for adults and to increase head room BMW have included ‘bubbles’ in the roof liner, but even with these my head was still touching the roof. There are two ISOFIX/three rear tether child seat restraint points, but it reality only room for two car seats. If you had two car seats fitted then vision out of the rear view mirror would be negligible. The centre seat folds down and has two drink holders in the front and there is also a good size drink bottle storage cubby in the door, with an additional cubby for other storage. There are no rear air vents for passengers, but they do get two micro USB ports behind the centre console and lights under the front seats, which are good for when you need to find a lost toy.

The boot in the 218i GC is somewhat compromised due to the roofline and although it is a reasonable size, its opening is awkward with the top of the boot opening being almost in line with the bottom. So you have to bend to see what is in the back of the boot or to place items right at the back. It also only has manual open and close and no boot opening button in the cabin, but there is one good design point. The floor in the boot is false and you can fold up the false floor and secure it at the back of the boot. This adds an extra 15cm approximately to the depth of the boot and there are two tie down points in this extra area. For further convenience the rear seats have a 40/20/40 split folding mechanism meaning you could carry long items even with two children sitting in the back seats. The 218i GC comes with a tyre repair kit and no spare tyre.

Safety features on the 218i GC include blind spot assist, front collision warning, lane departure warning with or without steering intervention and lane change warning at speeds greater than 20km/h. You only get standard cruise control with braking function and a standard rear view camera with front and rear sensors and rear cross traffic warning. There are front airbags for driver and front passenger, side airbags integrated into outer backrest bolsters for driver and front passenger, head airbags in A-pillar and roof edge for all four outer seats.  Presently the BMW 2 Series does not have a Euro NCAP or ANCAP safety rating.

All new BMWs comes with a three years unlimited kilometre warranty and 24/7 BMW Roadside Assistance. The BMW Service Inclusive Basic package covers your scheduled servicing needs for 5 years or 80,000 km, whichever comes first. For the 2 Series this package costs $1,550 and includes your annual vehicle checks, oil changes, all filters, spark plugs and labour costs for the duration of the package.

The 218i Gran Coupé might have been an excitable pony before start up, but once I hopped in the saddle its eagerness declined. The quiet cabin and tech are pluses, but the lack of gallop from the 3-cylinder engine left me feeling flat about this car. Prices start at $47,990 plus on-roads and as tested my Misano Blue metallic 218i GC was $53,190. I will be driving the M235i xDrive Gran Coupé in the coming weeks so hopefully that will reignite my giddy up for the 2 Series Grand Coupe. Visit your preferred BMW dealer to test drive one for yourself.