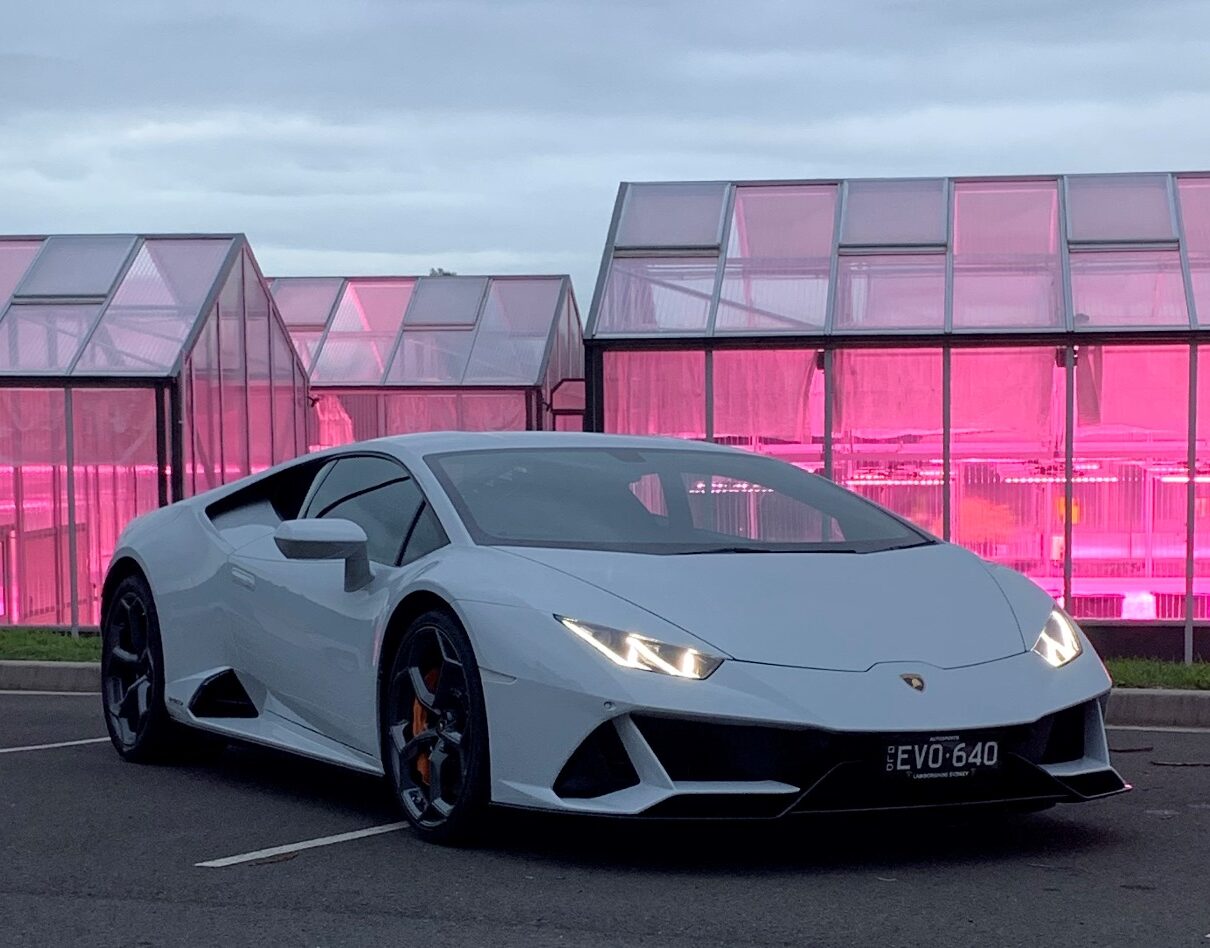 According to Greek mythology Daedalus created a set of wings made from wax and feathers so he and his son Icarus could escape from imprisonment by Minos the King of Crete. Icarus was warned by his father not to fly too close to the sun otherwise his wings would melt, but he failed to heed his father’s warning and fell into the sea and drowned.

This myth came to mind when I read what the paint colour was called that adorned the next-generation Lamborghini Huracán EVO that I recently had the pleasure of driving; Bianco Icarus Metallic. The EVO is based on the prowess and performance of the Huracán Performante and has improved aerodynamics and electronic trickery that is doing its upmost to keep you and your EVO grounded on the black stuff.

When you press the fighter jet inspired start button the EVO roars to life and you just know what is coming next is going to be extremely exciting. The high mounted exhaust delivers a super sound with even greater penetration into the cabin for extra loveliness. From idle to OMG takes just a small prod of your right foot and oh the noise, noise, noise. It’s loud and aggressive and what your $500k supercar should sound like, bloody awesome!

The glorious naturally aspirated 5.2L V10 sitting behind your head in the Huracán EVO produces 470kW (640HP hence the number plate) @ 8,000rpm and 600Nm of torque @ 6,500rpm. It is one the greatest engines still being produced in these increasingly electrified times and the day when Audi/Lamborghini stop making it will be a very sad one indeed. I understand why they are becoming rarer, but it doesn’t make it any less depressing for a car fan like me.

My travels in the Lambo included a run through a tunnel, so I cracked the window a small amount and behaved like a child tapping their stick on a xylophone as I changed up and down second, third and fourth gears to experience the full cacophony of sound that is a Lamborghini V10. I would never get bored of that noise and way the Lamborghini delivers its power with a continual shove in your back.

This is the quickest car I have ever driven and will do 0-100km/h in just 2.9 seconds and take you on to a top speed of more than 325km/h, if you happen to have a runway to play with. But it’s not just the engine that is so entertaining in the EVO; it’s the whole AWD drivetrain package. The 7-speed dual clutch gearbox whips through the gears like a conductor’s baton as they choreograph the orchestra towards the climatic crescendo of an Italian operatic piece with an 8,500 rpm red line, simply breathtaking.

You can control the tempo of the Huracán EVO using the ANIMA switch at the base of the steering wheel. With three drive modes to select from including Strada for urban/freeway use, which tones down the engine somewhat, enables you to engage cruise control and the EVO will happily trundle along at 50km/h in second gear. Switch into Sport mode and the noise increases and the EVO holds gears for longer. The last mode is Corsa, I didn’t try out as sadly I hadn’t booked a race track for the day. But I did check out the graphic changes on the driver’s display for each mode and they go from blue, to red and to full on racecar mode in Corsa with a huge taco sweeping across the dash and your gear indicator front and centre.

Driving along the bumpy Sydney streets even in Strada mode was a rough ride and dodging Sydney’s pot holes was a must to ensure that I did not damage the 20” graphite grey Aesir wheel, thankfully the ride quality is better on smooth roads. This was the first time I had driven a supercar in the wet, so I had to work out how to operate the wipers as well. Just a bit of added pressure as I was negotiating traffic without testing the wet weather stopping ability of the carbon ceramic brakes. Because you are so low to the ground it felt like I was driving under the rain as it streamed across the windscreen and this was part of the experience that I actually enjoyed.

As I only drive supercars occasionally I forget how low these cars are to the ground, you don’t step into them, but rather carefully lower yourself in until your bottom feels like it is almost touching the ground. But I actually found the EVO easy enough to get in and out of thanks to the width of the door frame.

Inside the cabin you are surrounded by the Lamborghini design DNA and it smells really nice as well. The Sportivo Alcantara seats are power adjusted and heated ($5,760 option); they are comfortable and really hold you in nicely. In my EVO the seats were Nero with Arancio Leonis highlights ($4,800) with the Lamborghini shield embroidered on the headrest ($1,800) with matching Arancio Leonis seatbelts ($3,000).

The Alcantara steering wheel is a joy to behold and the switches are easy to operate. The column-mounted metal gear selectors give you fingertip control for changing up and down the 7-speed gearbox with medical precision. I didn’t like the shape where my thumbs gripped the wheel though; it’s not rounded and has a sharpish angle on top, which was a bit uncomfortable to hold.

The Huracán EVO is now fitted with an 8.4” HMI Capacitive touchscreen that allows you to access all of your infotainment and climate control options. Mine had the Lamborghini Smartphone Interface with Apply CarPlay/Android Auto as a $6,480 option. The DAB tuner is a $1,450 option and only has patchy reception when you are out of the urban areas around Sydney, but your other media options include USB, on-board storage and Bluetooth audio. The screen displays the outline of the car with front and rear parking sensors and when reversing the rear view camera ($3,850 option) displays an image on the driver’s dash.

I liked the dry carbon look of the Carbon Skin Package that wrapped around the centre console area and the row of switches above the central screen. These include controls for windows, cancelling the auto on/off, parking sensors, hazard lights, ESC off and the nose lift. The nose lift is an absolute must on a supercar like this and Lamborghini must agree as it now comes as standard, rather than being an optional extra.

Storage in the Huracán EVO is at a premium, there is a ledge behind the seats for a slim handbag and a shallow storage cubby in the door for sunglasses. At the back of the centre console is a storage ledge for your smartphone with two USB ports. My EVO was fitted with the Smoker Package so there was a cigarette lighter here and under the central screen there was a removable ash tray. I did have a cup holder though on the passenger side of the dash as part of the Travel Package option which costs $1,450. Other than that you only get a small front trunk that would fit a soft carry-on sized bag in it, so if you are planning a weekend trip in your EVO then you will have to pack very lightly.

Like in the previous Huracán that I drove the cabin is tight and has limited headroom, meaning the EVO is not for tall supercar owners. It’s also noisy thanks both to the V10 engine at the back of your head and what I imagine is a very limited amount of sound deadening to control road noise. The other thing which takes a bit of getting used to is the brake and accelerator are centrally located, rather than the accelerator being slightly offset.

I liked that you can see the engine from the cabin and I think the optional transparent engine bonnet ($10,810) is a must to show off the heart of your Huracán to the world. There are even lights in the engine bay, so at night when you park the EVO up in the garage you can take a moment to admire that work of art before you go inside. I didn’t like the fuel consumption though, for my sweet sojourn I used approximately 22L/100km and the official combined fuel use is 13.7L/100km.

This Lamborghini Huracán EVO is a more rounded car compared to the RWD Huracán Spyder I drove in 2017. This does not refer to the styling though, which is still as angular as ever and something that I love about Lamborghini, it’s purposeful and aggressive wedge shape. I enjoyed the styling of the EVO from pretty much every angle. Even though it’s unmistakably a Lamborghini I felt less conspicuous in the white EVO compared to the fluoro yellow Lambo I previously drove. l would recommend a subtle colour to anyone who wants to buy one of these glorious machines, but is not keen on standing out too much in the crowd.

The Lamborghini Huracán EVO comes with a three year unlimited mileage warranty and owners can opt to purchase an additional one year warranty for $8,160 or a two years warranty for $15,860. Maintenance packages include your standard services and cost $7,210 for three years or $15,860 for five years. Generally, one off track days aren’t an issue when it comes to not voiding your warranty. However obligations under the warranty is excluded if the vehicle is assessed and deemed to improper use, negligence, accidents or incorrect vehicle maintenance, as well as racing or if it’s been modified with unsuitable parts that may affect the homologation and/or safety requirements.

The Lamborghini Huracán EVO is a luxurious driver’s car and starts at $459,441 plus on-road costs and as tested my white wedge with orange highlights was $520,461 plus on-roads. I know this is half the price of an average house in Sydney, but I really think it’s a bit of a bargain considering the car and engine you are getting for the money.

Supercars powered by electricity may offer sub two second 0-100km/h acceleration times, but they will never come close to providing the exhilaration you feel from the noise of an engine like the V10 in this Huracán EVO. Naturally aspirated engines will one day go the way of Icarus, but until then for those of you who are lucky enough to experience one of these very special super cars, enjoy your flying time while it lasts. Visit your preferred Lamborghini Dealer for more information about the new sporty and elegant Huracán EVO.