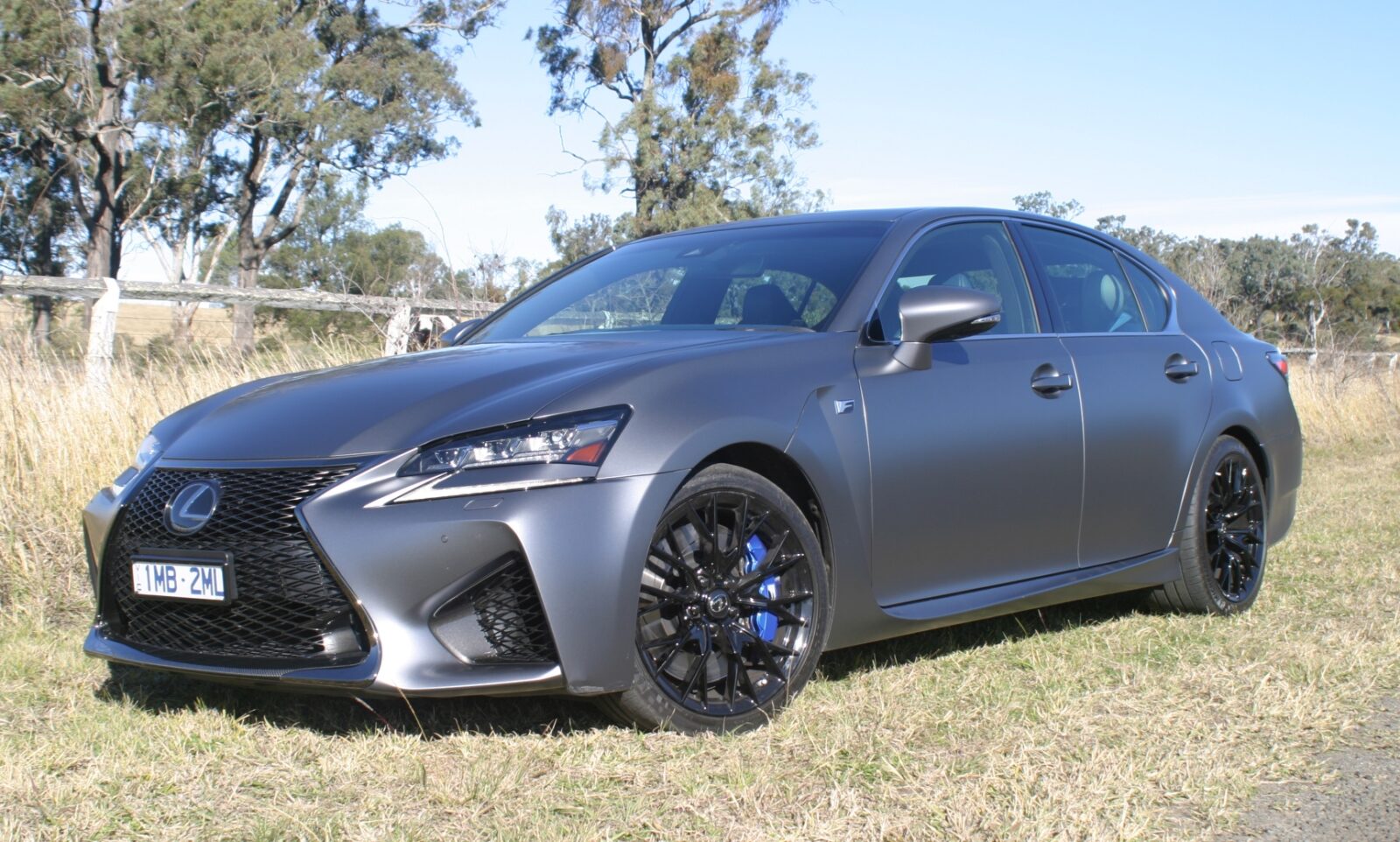 In 2018 Lexus celebrated the 10th anniversary of its F Marque, inspired by the famed Fuji Speedway, with the launch a two special edition vehicles based on the RC F and the GS F. I recently spent a week with the GS F, the sportiest sedan in the Lexus range.

On the GS F, the 10th anniversary special anniversary adds only cosmetic enhancements including the Mercury Grey matte paint, carbon fibre rear wing and lip on the bottom of the front bumper. On the inside the front sports seats are finished in vivid blue semi-aniline leather with white accents and the F symbol embossed in the head rests. The steering wheel, gear-shift knob, instrument panel, centre console and seatbelts are also blue and there is carbon-fibre weave finish in blue, black and silver on the centre console and around the door handles.

The Lexus V8 engine should have been epic, but sadly it wasn’t, it felt like it had turbo lag even though it is naturally aspirated. There was no pull below about 4,000rpm and then the power kicked in all at once and this meant it was hard to drive the GS F to its full potential. My son said that it didn’t even sound like a V8 as there was no guttural V8 rumbling or any pops and bangs on aggressive down shifting through the GS F’s 8-Speed Sports Direct Shift transmission. Lexus doesn’t even think it sounds good as they pipe engine and exhaust noises through the speakers to ‘enrich the aural experience’ and no V8 engine worth its metal should need its aural experience enhanced in my opinion.

Even in the sportiest of the GS F’s five drive modes SPORT+, the GS F was still very docile to drive. Then I found the torque vectoring differential and put the GS F in track, but still the GS F remained tamed. All Lexus F models get an 8″ digital driver’s dash that changes depending on the drive mode you select. It displays information like speed, rpm, shift indicator and current gear position and under the F mode you can even select a lap timer option. Maybe the GS F comes alive on the track?

THE GS F looks the part though with nicely designed, race-inspired front seats, but they do not lock you in tight and there is no side bolstering adjustment. The front seats are electrically adjustable and the driver’s seat includes lumbar adjustment and there are three memory positions so you can save your favourite position once you have found it. They are also heated and cooled, but neither of these functions worked as well as I would expect them too.

The infotainment screen is set back quite deep in the dash and is accessed via the Lexus Remote Touch toggle switch and this is quite annoying to use as it is very sensitive so it is hard to select the option I wanted. The Lexus touch pad, which was fitted on some of the newer Lexus models I drove after the GS F, is an improvement on the toggle switch.

The GS F has a 17-speaker Mark Levinson with 835W of power to enjoy your music from all the usual media sources including AM/FM radio, DAB, CD, USB, iPod, Bluetooth and AUX. Under the central arm rest is a removable shelf and under there is a decent sized storage cubby and two USB ports, one 12V outlet and one AUX point to connect your devices to the car.

The rear seats are spacious and there is ample room for two adults to fit comfortably. The rear has two ISOFIX/three rear tether child seat restraint points, but three car seats in the back would be a tight fit. In reality the GS F is designed to be a four seater as the central arm rest between the two rear seats folds down and there is a small storage cubby in it for carrying some of your children’s car toys. At the front of the arm rest is a small touch screen for the rear passengers to control their climate settings, the rear blind and heated seats. Annoyingly they can also adjust the media settings, but you can lock the screen to prevent them from doing this and control the climate settings from the front screen.

From the end of the rear armrest two drink holders fold out and my children pointed out that it was the same drink holders that were in the LC200 I drove earlier this year. At the base of front centre console there is one 12V and air vents. My son felt that having the air control setting blowing from the central vents only worked best, otherwise there was not enough air getting in the back of the cabin and he also said that the rear heated seats worked better than the fronts. I did really like the thick carpet mats that were in both the front and rear of the Lexus, they gave the cabin a luxurious feel and there was even a mat over the transmission tunnel to stop children ruining the carpet by climbing back and forth over it.

There is a small door behind the rear central arm rest that can be opened to feed large items through into the cabin from the boot, and this is always one of my children’s favourite features in a car that has it. The boot of the GS F is huge and would easily pass the pram and weekly shop test. I don’t own golf clubs, but it appears the boot has been designed to be wide enough to carry a set of gold clubs in there.

The GS F comes with pre-collision safety that detects vehicles or obstructions in front of your vehicle and assists with braking if required to avoid a collision. It also has a radar active cruise control at speeds above 40km/h, blind spot monitoring and rear cross traffic alert.  The lane keep assist system on the GS F consists of lane departure warning and also assists the driver with some steering while radar active cruise control is activated. This system doesn’t work as well as other manufacturers in my opinion. The GS F didn’t stay in the centre of the lane and wanted to swerve from side to side and I didn’t feel comfortable use it even for highway driving.

The Lexus styling is not to my taste and I found that there was too much blue used on the interior. I wasn’t a fan of the wheel design as it was very fiddly to clean and if you had OCD car cleaning tendencies then the front grill would take a good 20 minutes or more to be properly dry with a chamois. The other feature I didn’t like was the indicators because when I flicked them off to cancel they would easily flick on to indicate in the other direction and then I would have to flick them back again to cancel them.

The GS F I drove had over 13,000km on the odometer and it’s a great opportunity to see how well a car ages and the GS F was still looking good and feeling very solid for a car that was 12 months old, something you would expect for a car that costs $155,940 plus on roads. The Lexus GS F is a comfortable, luxury family sedan with a V8 engine that will not wakeup your baby sleeping in the car; to experience the GS F for yourself visit your preferred Lexus dealer.