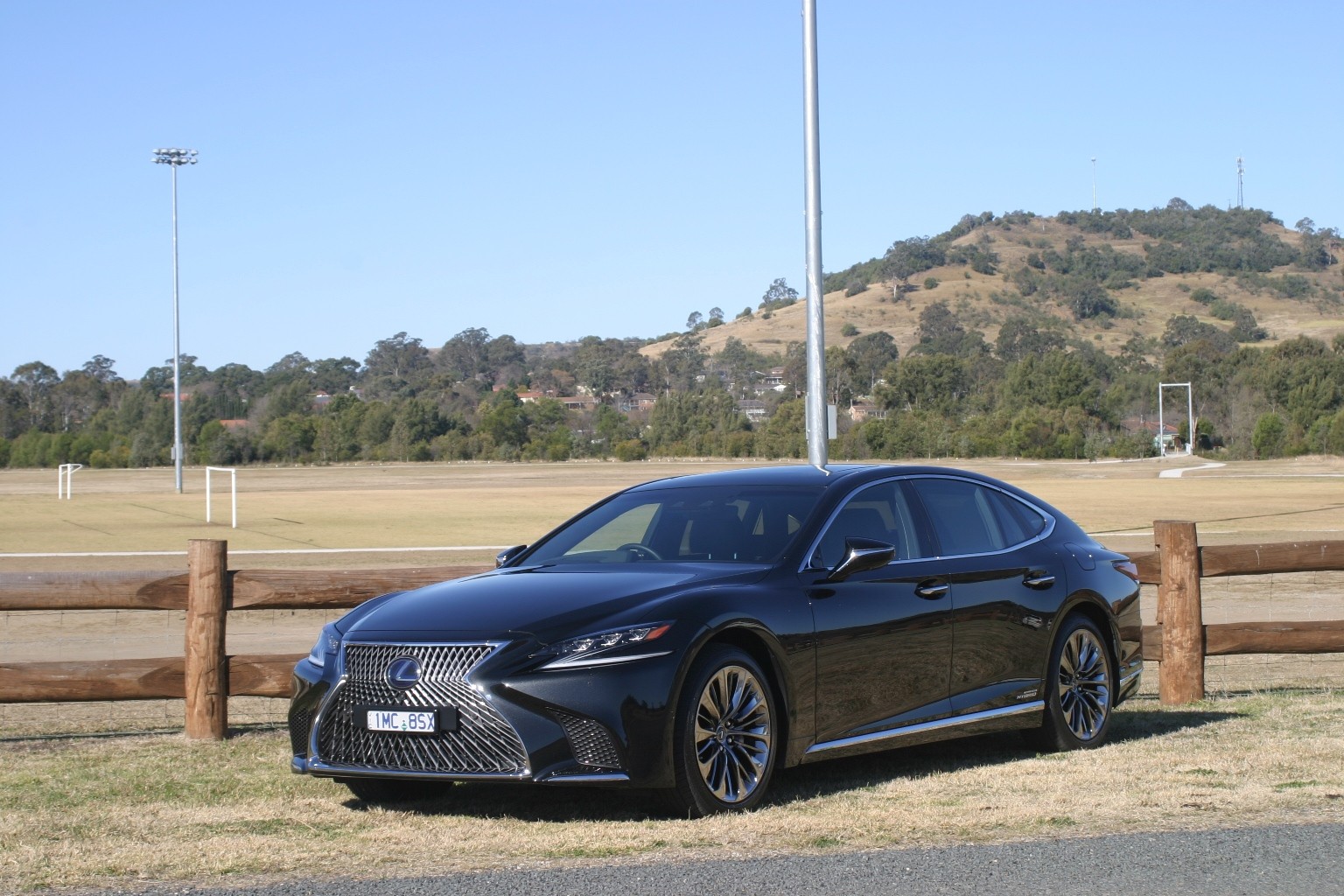 Do you ever feel like your whole life is just a constant juggle of ferrying your children from one place to another? I know I do and thankfully Lexus understand and have created a car to make this weekly logistical shimmy just a bit more enjoyable. The LS500h is the closest thing to date that I have driven to what I think a Rolls-Royce would be like for both the driver and the passengers, but the LS500h is about one fifth of the price of the Rolls.

The luxury starts when you first open the door of the LS500 and the seat belt latch extends up to make it easier for you to engage the belt and at night they also light up so you can find them easier. This was a great function but the light went out too quickly for my children and so they had to turn the cabin lights on anyway, which can be done via the touchscreen on the central arm rest that folds down between the two rear seats.

When I say this car is a limo I’m not kidding and for the first time in any car that I have driven the rear passengers had it better than the front passengers. But don’t get me wrong the driver and front passenger are not slumming it in anyway. They get 28-way power operated seats with three memory positions plus the seats are heated and cooled, which works a lot better than the GS F I drove the week before.  I liked that the driver could move the passenger’s seat as well by using their buttons on the door. Front passengers get five different massage settings and having only the Bentley/Lamborghini massage seats to compare these too, I would say the Lexus massage is not as good them.

But rear seat passengers, aka my very spoiled children, had it even better. In addition to being heated and cooled their seats also reclined and the passenger side rear seat even had an ottoman. They had seven massage settings to choose from and the additional benefit of spot heating that targets the shoulders or the middle of the back. I found that the reclining seat could be used with the booster seat in place, but I do not think you could or would want to use it with a full-sized child car seat with the seat reclined.

All of these seat functions are controlled via the touchscreen in the arm rest between the two seats, which can be locked if you have young or annoying children who just want to push buttons. In addition the rear touchscreen also controls the rear blinds, rear climate settings (which could also be controlled from the front screen) and the media settings. The arm rest also has a storage cubby that fits about four DVDs and has a HDMI port, two USB ports and two headphone sockets with individual volume control.

But of all this technology the favourite part of the car for my children was the dual 11.6” rear screens that could stream separate media sources. This is because I am one of those parents who doesn’t allow their children to watch devices in the car, even when we are going on a long trip. So I thought allowing them some screen time in the car would mean an argument free drive for me up the front.

But no they still argued about who was controlling whose seat and on and on. To which my conclusion is that children will argue regardless of the entertainment that is provided in the car, so they might as well look out the window at the passing scenery and learn something along the way.

The LS500 is technically a five seater with two ISOFIX/three rear tether child restraint points in the back, but in reality it would only ever be used as a four seater. Considering the space in the rest of the car the boot is surprisingly small and would only fit the weekly shop and a stroller or if you are so inclined a set of golf clubs.

I liked the dash design of the LS500 as it is coherent and had a nicer use of materials.  The 12.3 inch multimedia screen is navigated using the Lexus Remote Touch-pad Controller, which works a lot better than the toggle switch in some Lexus models. This screen combined with the 23 Speaker, 2400W equivalent Mark Levinson audio with subwoofer meant watching/listening to my favourite music DVD of all-time Robbie Williams Live at Knebworth, was a very special experience. Other media inputs include AM/FM radio, DAB, Bluetooth, USB and AUX.

The driver gets an eight inch digital instrumentation panel that changes depending on the drive mode you choose and also the largest head up display I have seen on any car, it appeared to be about 30cm wide. You can adjust the HUD for position, brightness or turn it off completely if you want.

As expected the active safety equipment available on the LS is extensive and could be configured for sensitivity or turned off completely. It has Pre-Collision Safety System with pedestrian detection, Front Cross Traffic Alert, 4-camera Panoramic View Monitor, Blind Spot Monitor with Rear Cross Traffic Alert and reversing camera with sensors. The Road Sign Assist was very good at picking up speed signs and even detected the 40km/h sign on the back of a bus that I was following. But it slightly lack intelligence as it tells you about school zones even when they are not in operation.

The Radar Active Cruise Control did not work as well as other systems I have used and the LS500 would not hold speed going down a hill and then going up a hill the car would accelerate to maintain power and then exceed the speed limit and beep at you to tell you had done so. I also found the Lane Trace Assist on all of the Lexus models I drove was not as good as some other car manufacturers; it struggled to hold the centre of the lane even on well line-marked roads.

Passive safety features in the LS500 include twelve airbags including rear seat cushion airbags. But interestingly there was no bong or indication that the rear passengers were strapped in.

Some of the other design features that I really liked on the LS500h included the front arm rest cover that could be opened either from the driver’s or passenger’s side so both people in the front could access it easily. I also liked the stitching detail on the doors and at night the way the light shined up the door it looked really nice.

I didn’t like the two ‘horns’ that protruded out from either side of the driver’s dash. One was for selecting your drive mode (Eco, Comfort, Normal, Custom, Sports or Sports+) and the other for either turning the traction control off or selecting snow traction setting.

The LS500h is powered by a 3.5 litre V6 hybrid engine that is self-charging, so no need to plug it in for an electricity top up ever. The engine produces a satisfactory 264kW with 350Nm from the Petrol Engine and 300Nm from the Electric Motor. This is a big car, so the claimed combined fuel economy of 6.6L/100km is impressive and even more so because for my week with this limo I used just 8.7L/100km.

The Continuously Variable Transmission (CVT) with 10 stepped ratios combined with the multi-link front and rear air suspension, which is also height adjustable, offers a smooth and relatively quiet ride and the car glides over bumps in the road in an effortless fashion, so as not to disturb the passengers in the back.

As tested the Lexus LS500h Sports Luxury with black trim and the Premium Ornament Enhancement Pack was $196,125 plus on-road costs. The hybrid technology developed by Lexus means that this large sedan has the fuel efficiency of a hatchback and about twice the amount of space. If you want some luxuries to help you through the daily grind visit your preferred Lexus dealer and check it out for yourself.