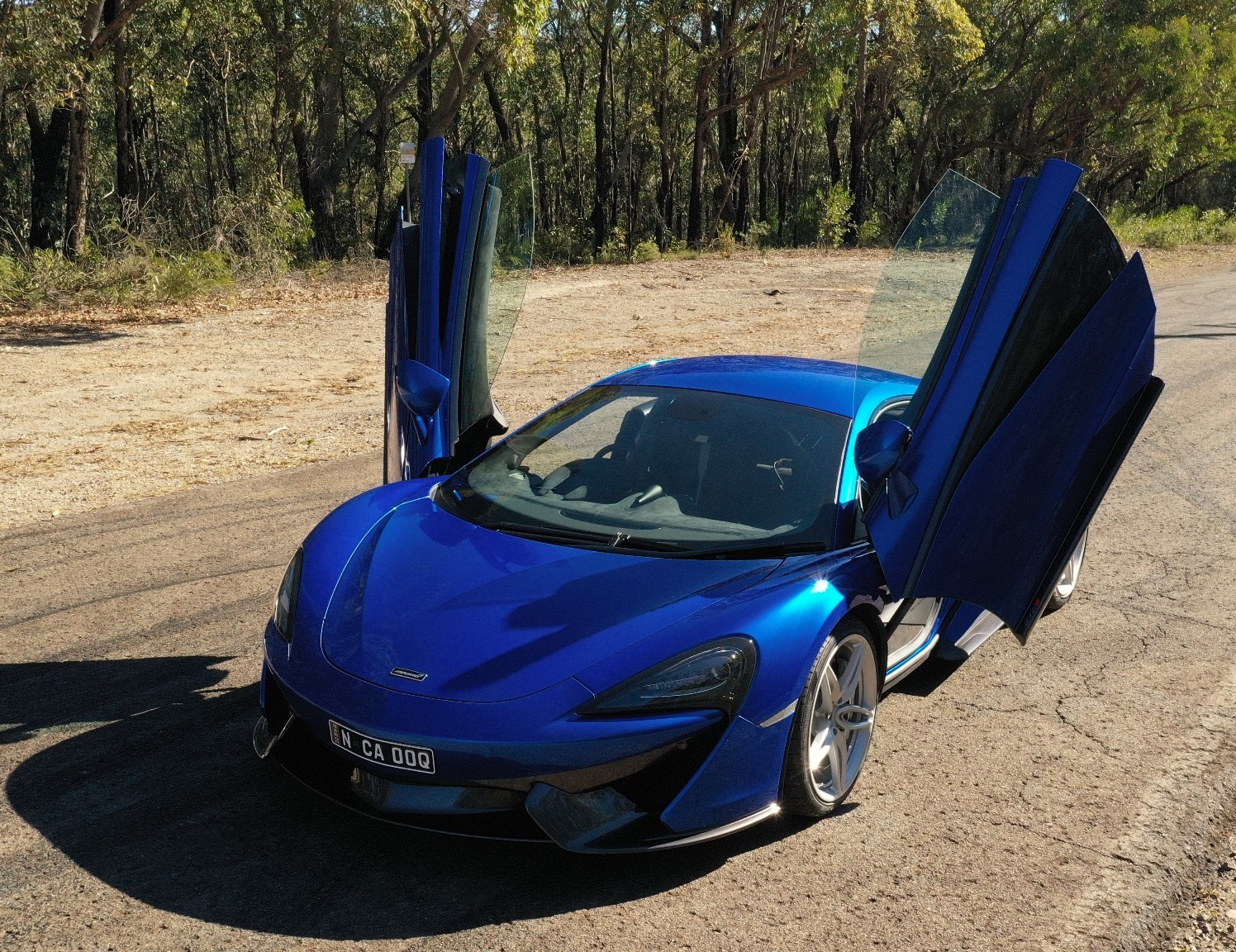 For supercar fans the current crop of models available to purchase could well represent the greatest we are ever going experience before the silence of hybridisation consumes them. For sure supercars will get quicker, but will they still have a soul that grips your heart and makes you ache to actually want to drive them?

For now, whether your preferred flavour is McLaren, Ferrari or Lamborghini you are guaranteed something very special when you experience the joy of driving a supercar. I recently had the opportunity to spend a few hours in the former of this trio, a McLaren 570S Coupe, under the guidance of McLaren driver trainer Luke O’Neill, who has a wealth of knowledge of the brand.

As I approached the Vega Blue beauty my first question for Luke was “how do I open the doors?” McLaren don’t want their owners to look like a doofus trying to find the concealed door release button, so all I needed to do was double click the open button on the key fob so the door was already released and then simply lift it up and pull it down to close.

The doors actually form part of the aerodynamics on the 570S and the scoop within the door channels air into the engine intakes behind the B pillar. This feature means that McLaren don’t have air intakes on the ‘hips’ of the 570S and I think this adds to the sleek appearance of the car. The view from above shows how clean the design is and also shows you how much of the engine that the owner is allowed to see, because you can’t remove the engine cover to actually have a closer look. This would disappoint me as an owner, even though I would never want to work on the McLaren, it is nice to be able ‘pop the hood’ and show your car friends what’s under the bonnet.

When the 570S was first released much was made of improved access to the cabin and having never experienced older McLarens I can’t comment on any improvement, but for me it was still a challenge to complete the exercise in an elegant manner, I’m sure I could master it with a bit more practice though.

Once inside I was greeted by a driver focussed cabin with race car inspired seats covered in a combination of Nappa leather and Alcantara. My 570S had the 8-way power adjusted seats, but the controls are located on the left hand side of the seat so they are a little hard to navigate blindly.

The 7” portrait touch screen gives you access to audio, telephone, navigation options and the dual zone climate control. As I had a passenger with me I didn’t even turn on the radio and try out the optional Bowers & Wilkins audio system ($9,440). I’ll save this for the next time that I have the pleasure to drive a McLaren.

As we headed out of Sydney down the motorway I was taken by the comfort offered by the 570S. Even though the 3.8 litre twin turbo V8 engine is almost directly behind your head; inside the cabin is quiet and you can easily hold a conversation at motorway speeds. The ride is supple and the seats very comfortable and I could even see over my shoulder for changing lanes.

The windscreen is deep so you get good vision out of the front of the 570S. Luke explained that the top of the front wheel arches align with the centre of the front wheels so when you are driving on the track this gives you a better understanding of where your front wheels are for better placement. This also shows you the thought process that has gone into the design of the McLaren.

The steering wheel design is simple with no controls at all located on the wheel. Behind the wheel are your gear selectors for the 7-speed Seamless Shift Gearbox. The speed at which the McLaren changes gear requires your brain to be re-programmed to what is ‘normal’. This caught me out, as I was driving at the same time another press car with a somewhat disobedient gearbox, and when I pulled the McLaren back through the gears to overtake a car I found myself very quickly in first gear!

Of course it goes without saying that I quickly dispatched that overtake and disappeared down the road. The other feature of the 570S gear selectors that I have never experienced in any other car was the dual-nature of them. Traditionally you upshift by pulling the paddle on the right up and downshift on the left, but in the McLaren you can do both. So on the right you pull up for upshifts but then you can bring your fingers to the front of the selector and push down to downshift and vice versa on the left. Luke explains that this is handy on the track, but as I had never experienced it before it was not something I felt comfortable doing, it was sort of counter intuitive to what my brain knows and so would require some practice to master.

There are powertrain modes to choose from in the 570S; Normal, Sport and Track and these adjust the aggressiveness of the McLaren. My time was spent more getting to know the McLaren rather than driving it hard.

The mode selection also changes the displays on the now fully electronic driver’s dash, which is a new feature of the 570S. And my eyes were fixed on that dash when Luke engaged launch control and the 570S was poised to blast me from 0-100km/h in 3.2 seconds. The electronics do all the work and make me look good as all I need to do is hold the throttle flat and pull my left foot off the brake. For my first launch, I was tentative, not knowing how the McLaren would react. But I should not have been concerned and I really enjoyed the second launch as it didn’t do anything unpredictable.

This mind-bending performance is thanks to the 3.8litre twin-turbocharged V8 engine that has 419kW (570PS/562bhp) @ 7,500rpm and 600Nm (443lb ft) @ 5,000-6,500 rpm and a dry weight of just 1,344kg. Top speed of the 570S is 328kph (204mph) and unless you live in Germany or have access you a race track with a long straight most owners will never see this figure. Owners would however be happy with the 100-0km/h figure of 33 metres or 3.1 seconds should they ever need to pull up the 570S quickly using the carbon ceramic brakes. Official combined fuel efficiency is 11.1L/100km and due to my brief time with the 570S, I didn’t record my as tested fuel use on this occasion. The performance from this engine is formidable, but the sound is not and if I were to make a complaint about the McLaren it was that it could be a little louder.

The 570S is part of the ‘Sports Series’ range from McLaren and these are marketed as being everyday supercars. So how practical did I find the 570S? I guess you could use it every day, there is a ledge behind the seats where you can put your hand bag, but make sure that you do up the zips so that the contents of your bag are not spread around the cabin as you are cornering hard. There are drink holders, but the bottle that was in the one at the front of the centre console did fall into my foot well while I was driving hard and this has the potential to be very dangerous.

The front boot is quite large and you would be able to carry enough luggage for a weekend away or the weekly shop if you do decide to take the 570S on a grocery run. It also includes a fire extinguisher in case you get distracted by an open track day on the way home from the supermarket.

Other features to help you day to day include lift kit, front and rear parking sensors and rear view camera which come as part of the Security Pack ($10,940 option) and one that I would automatically tick if I were to purchase my own 570S.

McLaren owners do get plenty of choices to individualise your purchase. The 570S starts at $395,000 and as tested my 570S was $445,120 plus on road costs, but if you start ticking multiple option boxes this will quickly head beyond the $500k mark.

Where does McLaren sit in the supercar battle between the three powerhouses in this sector? That simply depends on your personal preference, but if you have ever considered living that supercar dream, you currently have a choice that I think represents the peak in supercar performance. Visit you preferred information McLaren retailer to test drive a 570S for yourself.