Some car companies claim that their SUVs can perform on and off road, but to be honest I have never taken any of the SUVs I have driven near what I would class as true off-roading with sand, mud or ruts. It’s refreshing then to see that the Volvo XC40 makes no huge claims about its off-roading ability; to the contrary it claims to be “built for city life and designed around you”. It’s not a Sports Utility Vehicle more like a Sports Urban Vehicle. 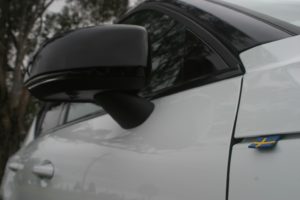 I spent a week with the XC40 T5 R-Design Launch Edition, which comes standard with pretty much everything you need. The T5 R-Design is the top of the line variant in the XC40 model range and can be distinguished by its two-tone colour scheme with a glossy black roof. The exterior and interior design is very ‘Swedish city’ and it looks and feels like a supremely modern vehicle. Of the external styling features I particularly liked the little Swedish flag on the driver’s side and the ‘Hammer of Thor’ LED headlights.

The XC40 certainly is built for the city dweller with so many cool features it’s hard to mention them all! On the driver’s side of the windscreen there is a small clear plastic clip that you can slide your parking ticket under so it is clearly displayed. Or if you are in a parking station there is a handy slot next to the steering wheel where you can stash the ticket you take when you enter the parking station, so no more playing “where is my ticket?” when you go to leave.

The front door pockets are huge and lined with carpet that goes three quarters the way up the door, so if you have loose items stashed in them they are less likely to rattle. The pockets are so big that you can fit a lap top in there, which is convenient and means that if you leave your laptop in the car it is not obviously seen from the outside of the vehicle. In the centre console there is a bin with a flap lid that you can put your rubbish in and then take the whole bin section out of the car to empty it.

Moving on to the passenger side and there is a handy hook with a 2kg load limit that flips out of the glove box that can be used for hanging your take away food bag on. Gone are the days of spilled curry in the passenger foot well or driving home with one hand on the steering wheel and leaning over with the other hand holding the take away bag so that it doesn’t fall over. The whole cabin has an open airy feel airy thanks to the panoramic sunroof, which seems to be a common feature these days in many new vehicles. 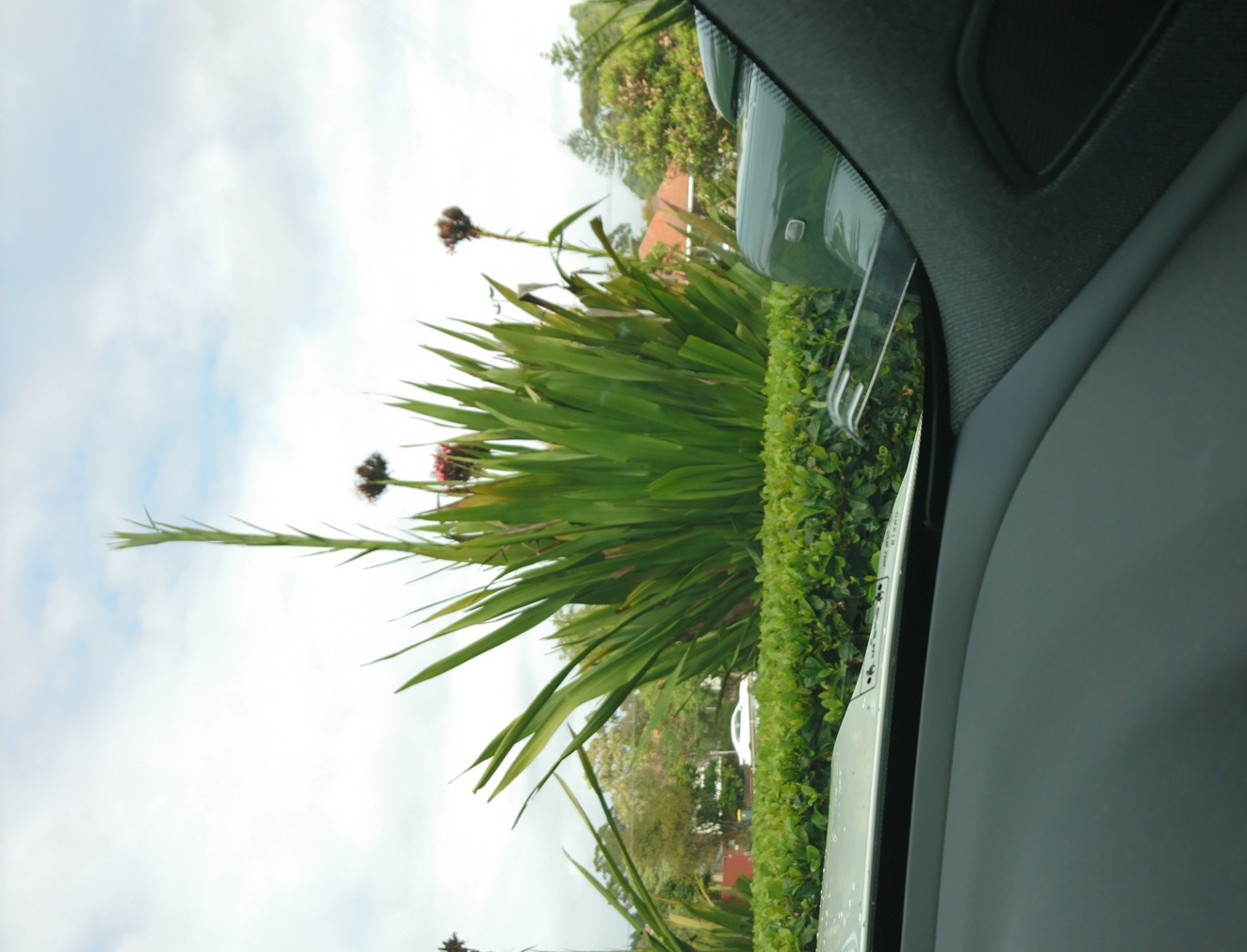 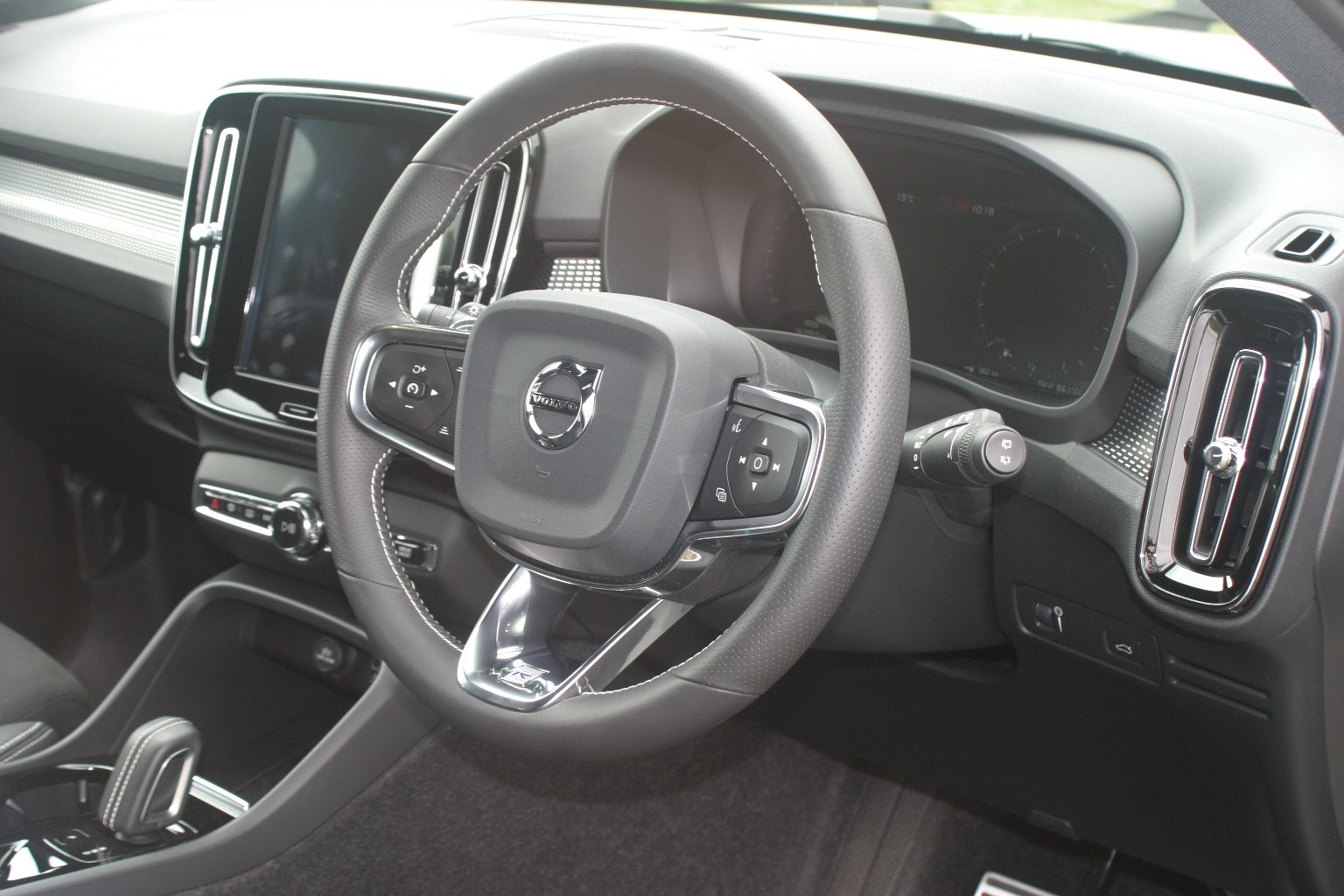 Ticket slot to the right hand side of the steering wheel 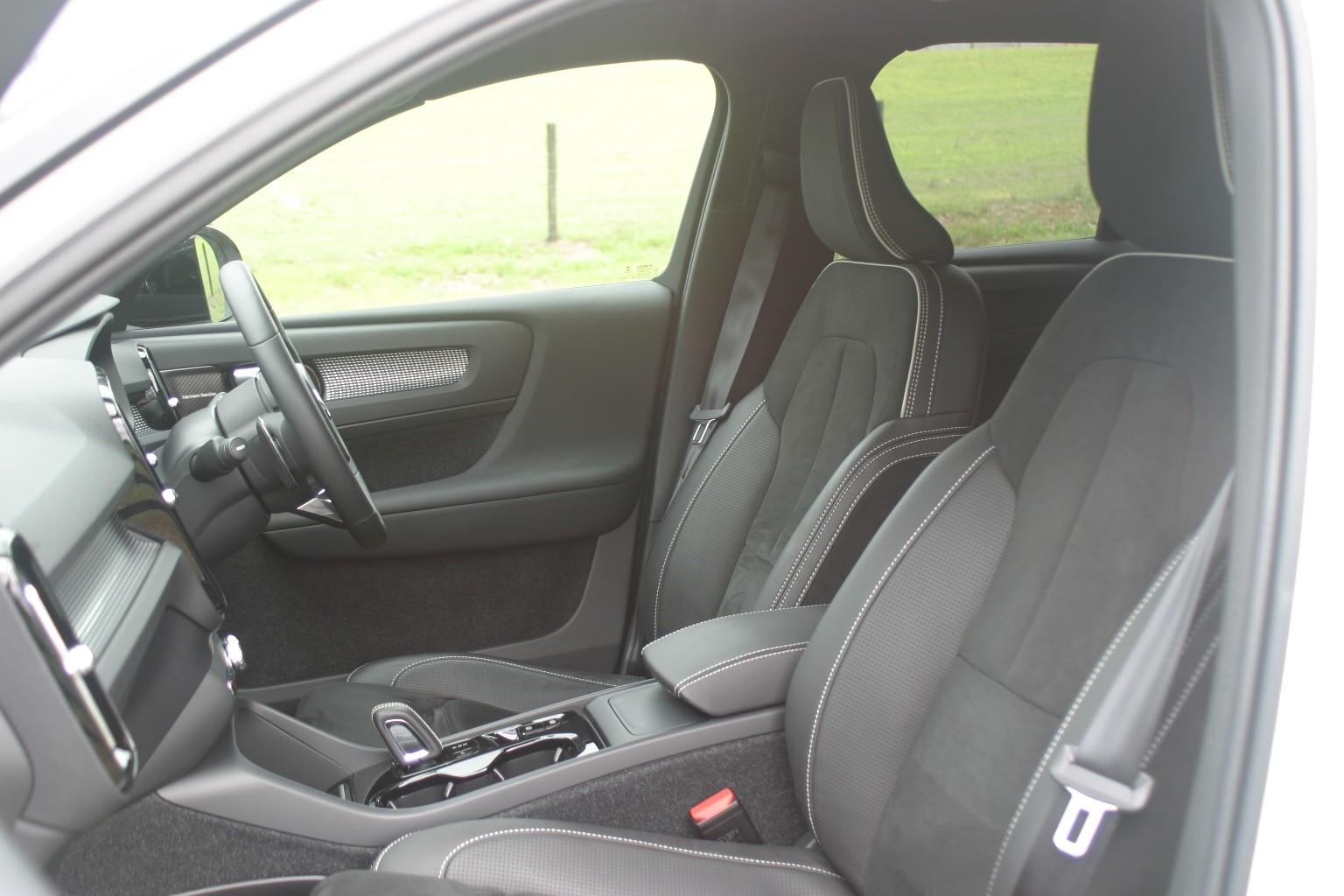 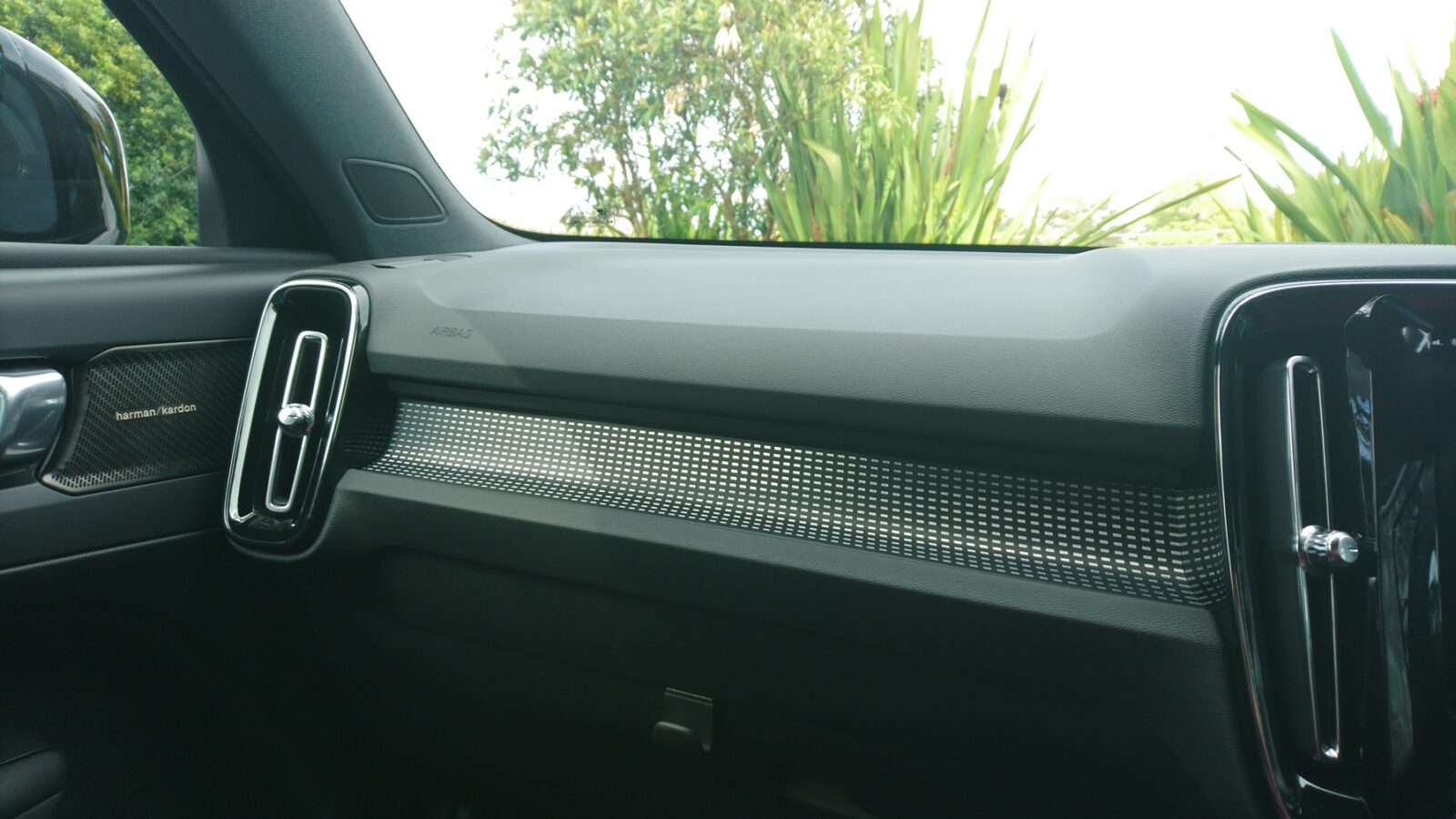 The take away food hook

The infotainment system in the XC40 is one of the best I’ve seen for some time and is on par with the Tesla system. The 9” display has a vertical orientation and there are three screens that you can flick through. The first screen has all of your radio and internet options with a number of built in apps including weather, TuneIn, Google Local Search and Wiki Location. The second screen is the main screen and enables you to access the sat nav, phone and music information. The third screen enables you to customise the active safety features and the vehicle settings. The infotainment even contains the owner’s manual for the car, something that Tesla also does. Only downside was the screen was hard to clean with a microfibre cloth as can be seen in some of the photos I have taken. 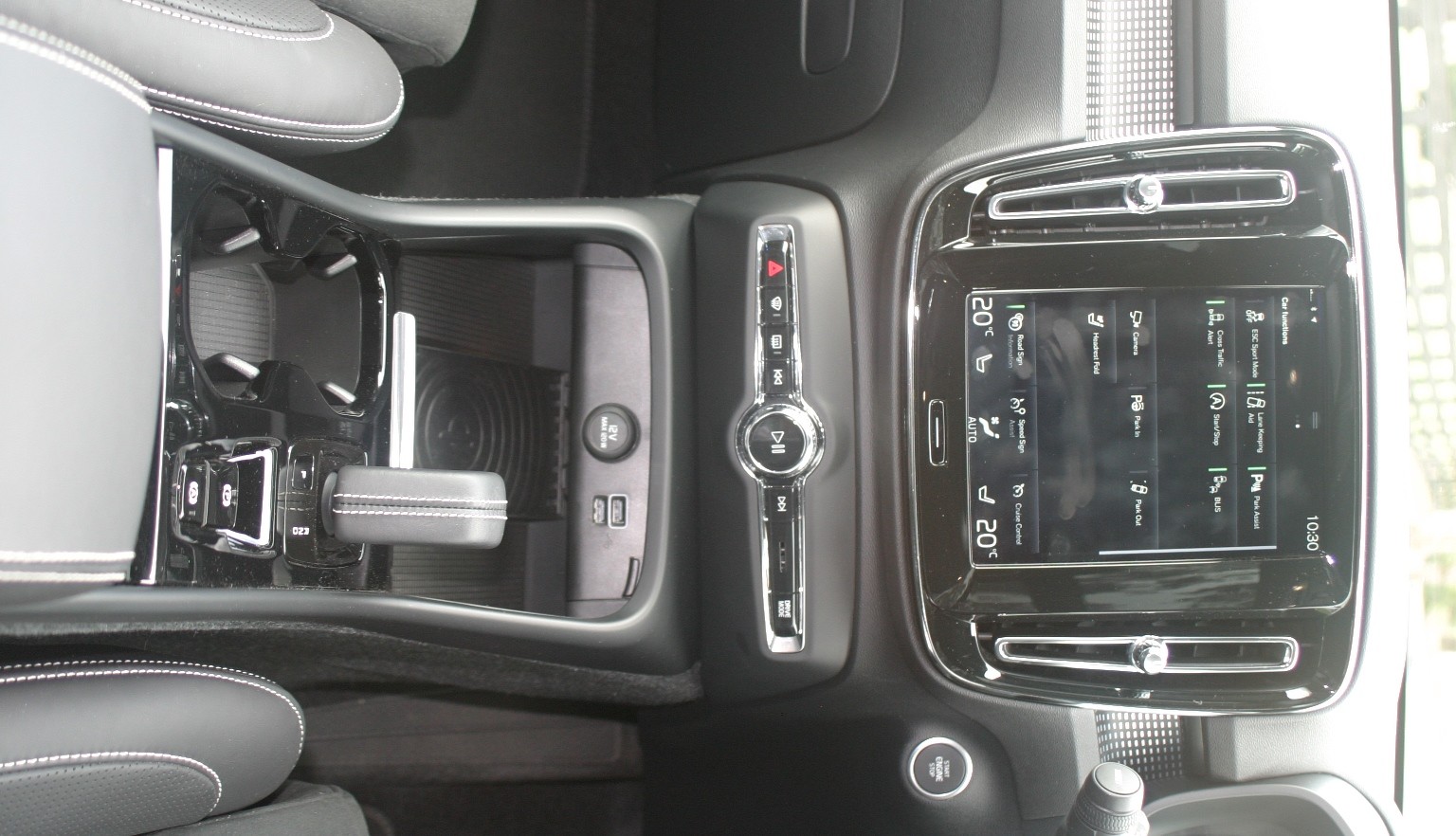 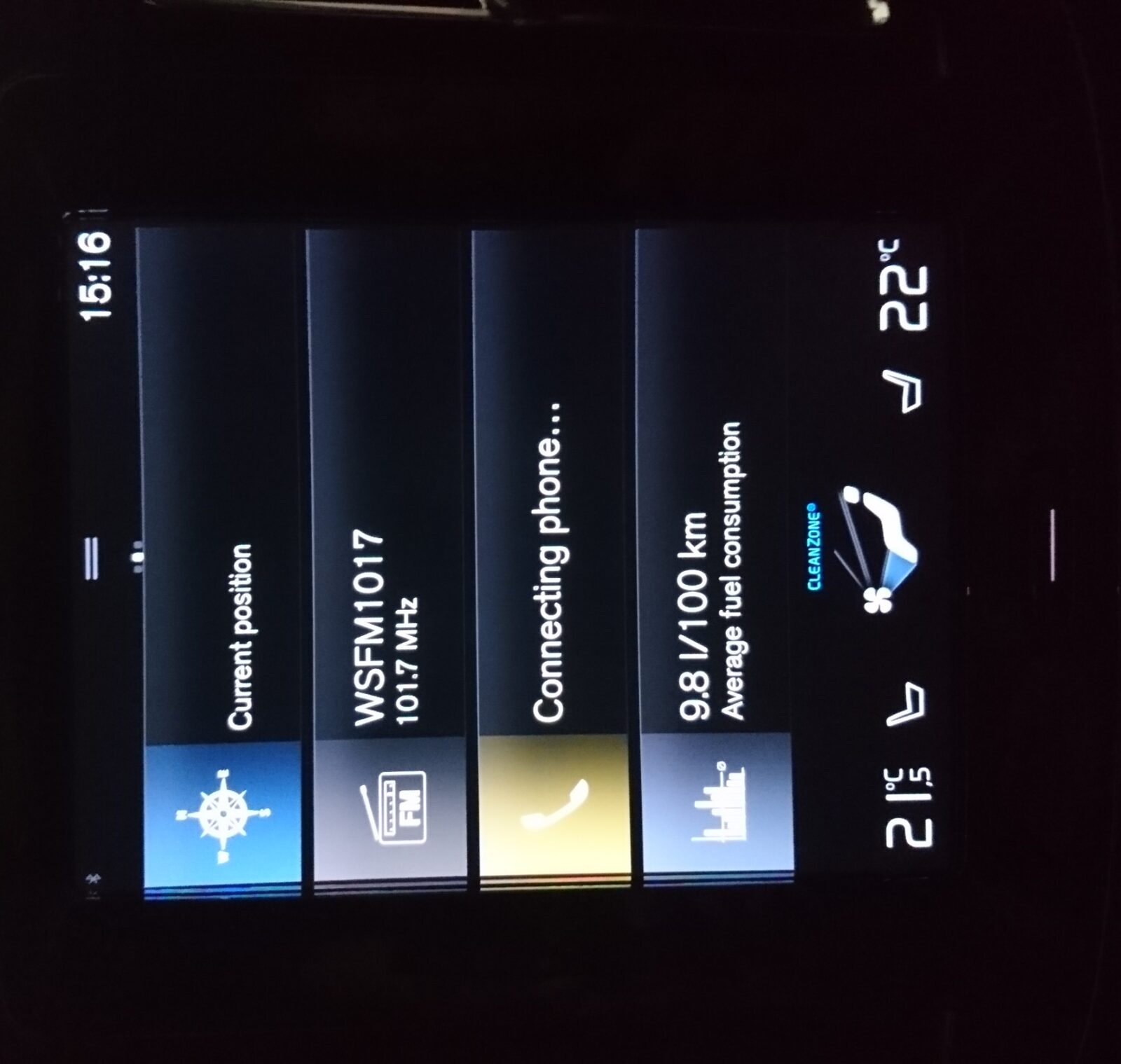 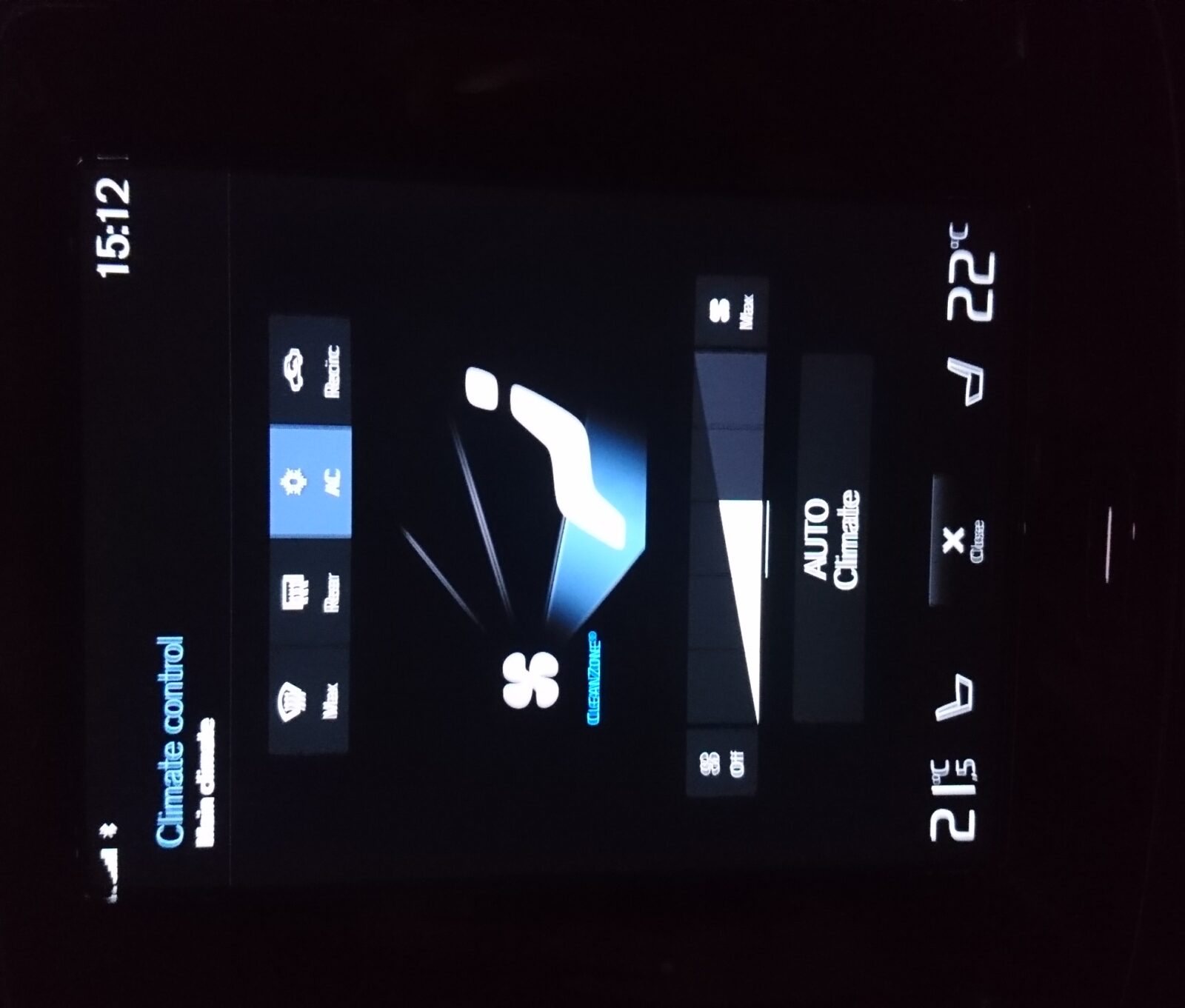 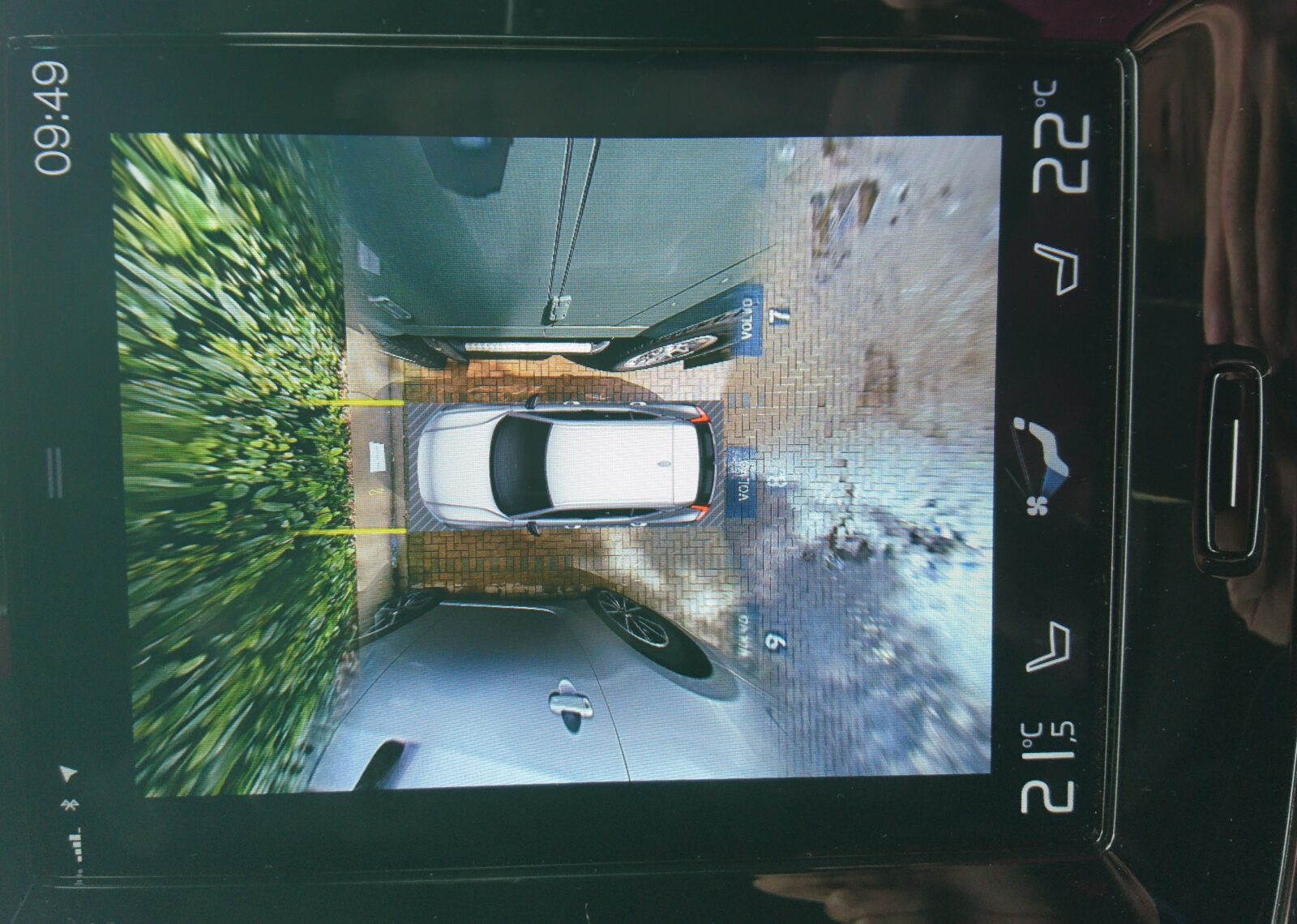 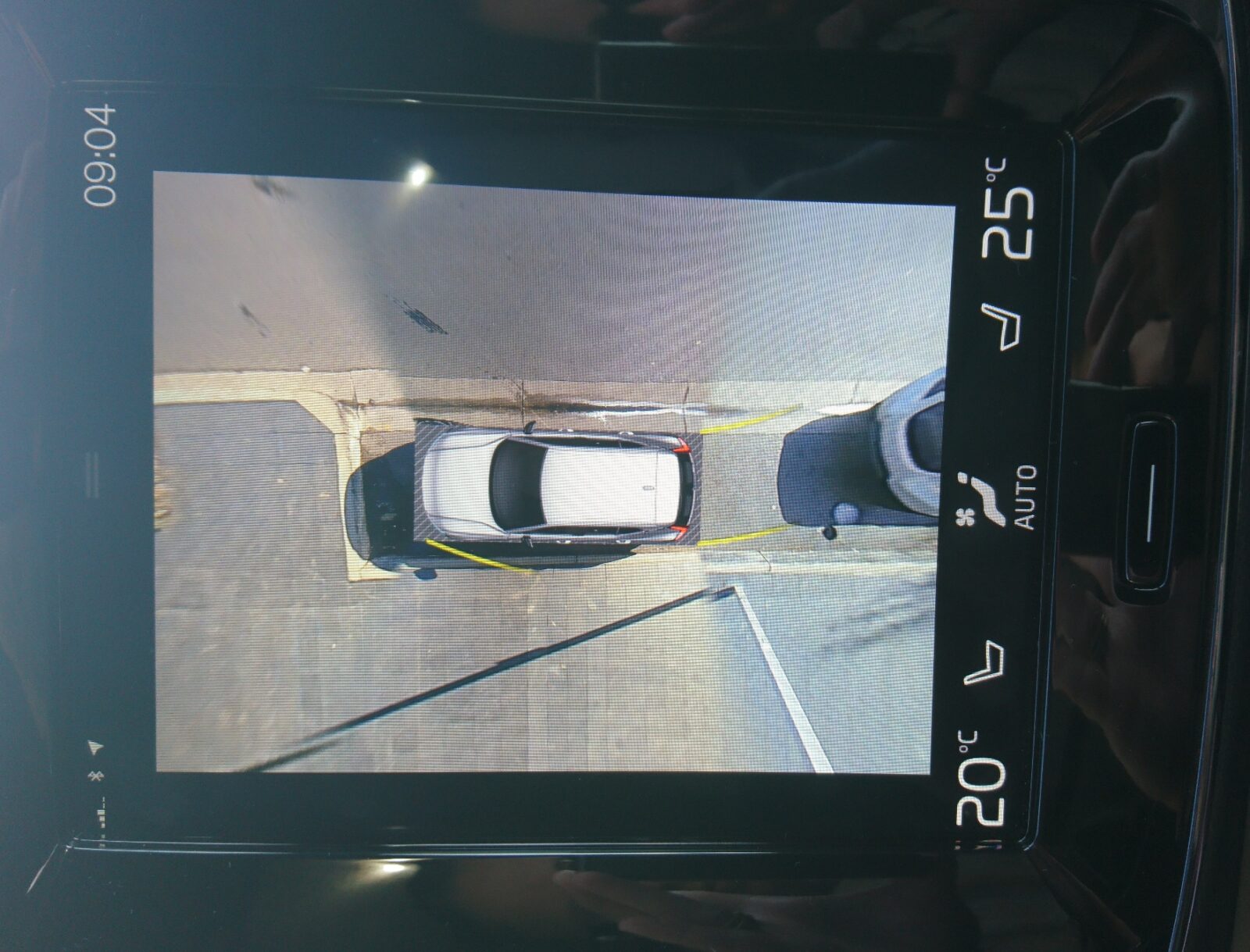 The XC40 has a Harmon Kardon sound system and you can listen to the music streaming via your smartphone integration or the digital radio. So that your phone battery doesn’t go flat there is inductive phone charging for compatible devices in the front of the centre console. Or if you need them there is one 12V and two USB outlets in the front and one USB outlet in the back for rear passengers.

The voice control works well to access sat nav and make phone calls, which is great because entering information manually into the sat nav is a bit of a pain. To enter the address you need to write the letters on the screen and if you are driving or have terrible writing like me the system struggles to distinguish what letters you are writing and there is no other way to type an address in. Once you have the sat nav up and running you can view it on the digital dash meaning it does not need to be displayed on the touchscreen.

I did like that the sat nav had a mute button so that you could turn off the guidance when you didn’t need it. This is one feature that I have always wanted on a sat nav as it enables you to mute the first part of your journey where you most likely know where you are and then turn the guidance on when you get closer to your destination and actually need to be told where to go. Another feature I liked about the Volvo was that when you entered a school zone the 40km/hr sign flashed on the dash and a pedestrian symbol illuminated as a visual reminder to slow down.

I’m not that sure how keen I was on the patterned aluminium look fascia that went across the dash and doors, one minute I liked it and the next I thought it was too ‘blingy’. And the passengers were split over the vertical air vents, the girls liked them and the boys didn’t. One thing for sure though is that I struggled to get enough air blowing into the rear vents for the children in the back. I had to turn the air speed to maximum and close off some of the front vents in order to push the air into the back and this was one feature that let the XC40 down. 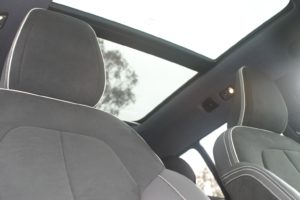 The ride quality in the XC40 was good and the steering was very nice and there were no rattles in a car that had done more than 8,000km when I picked it up. The Nappa Leather accent seats were firm and did not have a lot of side support, but the Nubuck textile that runs down the middle of them does stop you from moving around too much. The front seats are both power adjusted and heated in addition the driver’s seat has two memory positions.

Naturally, the XC40 has a five star ANCAP safety rating and there are many active safety features to help protect you and your family. These include Pedestrian, Vehicle, Large Animals and Cyclist Detection, Intersection Collision and Oncoming Mitigation with Brake Support, Adaptive Cruise Control including Pilot Assist (semi-autonomous driving), Lane Keeping Aid and Blind Spot Information with Cross Traffic Alert, plus more. Volvo aims to have a car so safe that “by 2020 no one will be killed or seriously injured in a new Volvo car.” 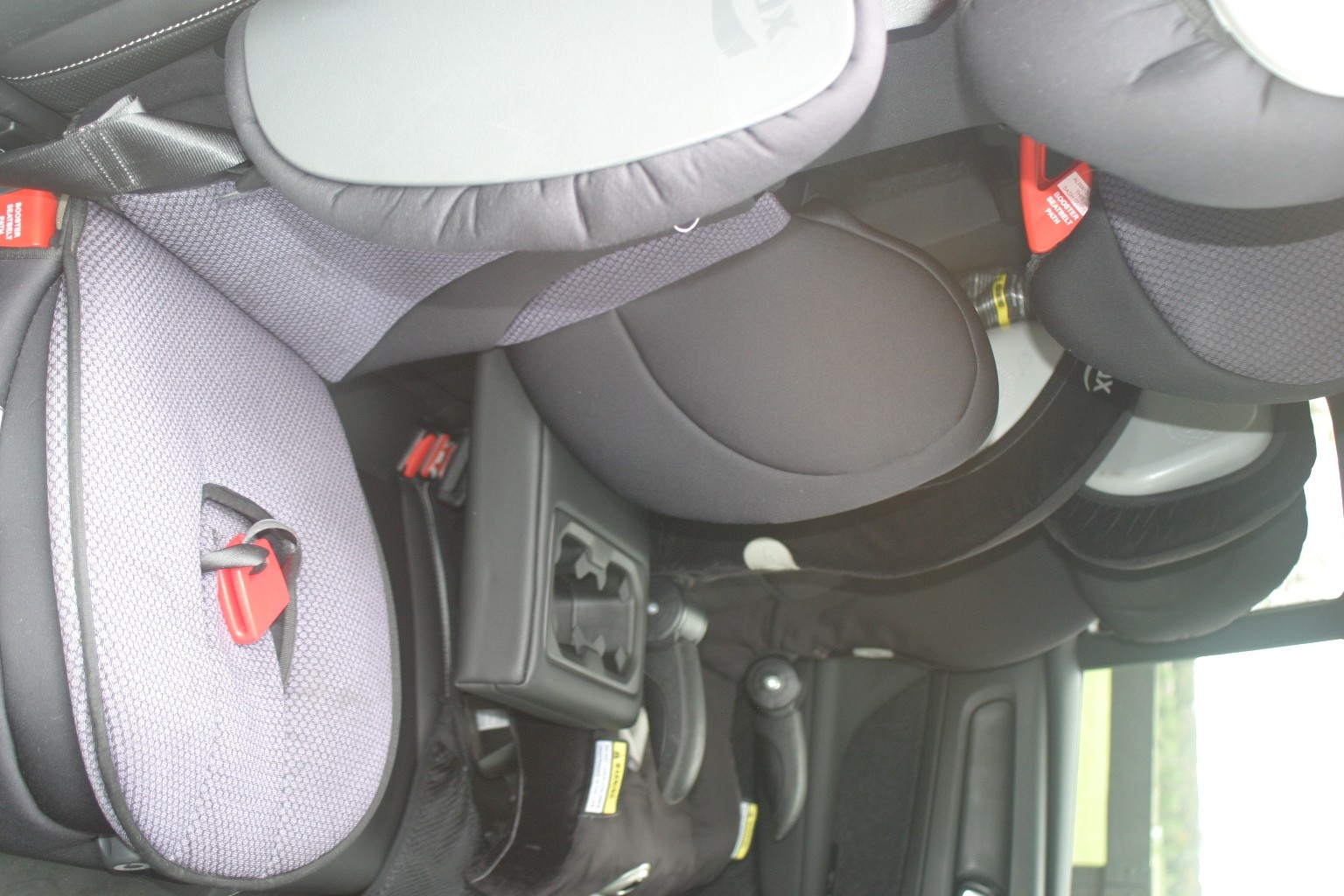 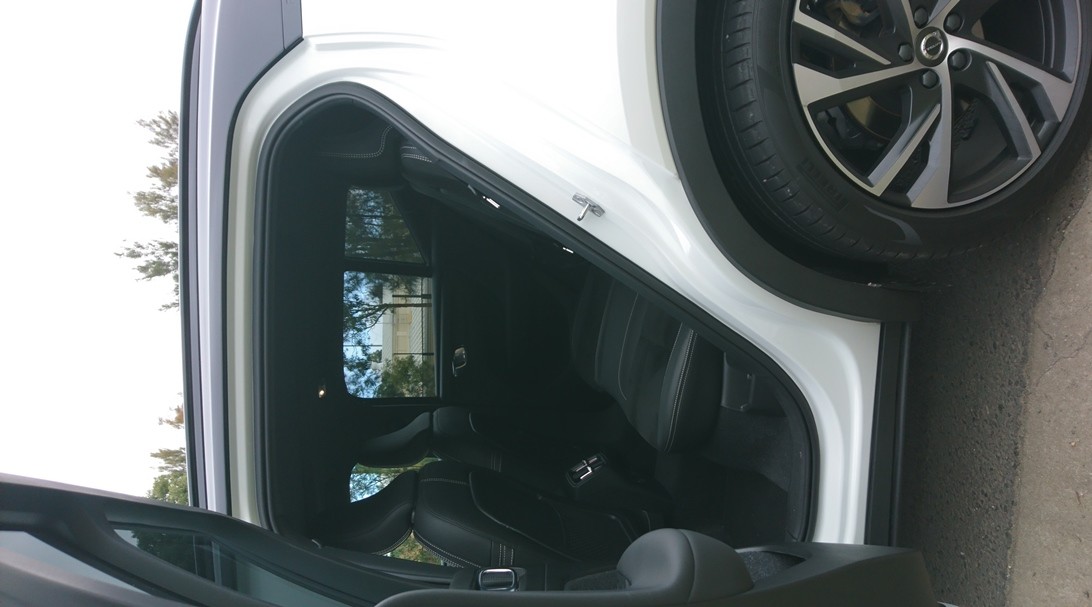 The XC40 is a mid-sized SUV and has plenty of room for rear passengers and a good sized boot. There are two ISOFIX points and three rear tether points and you can feel comfortable that your children are travelling in a very safe car with its side impact protection system with airbags in the front seats and inflatable curtains. My children are very easily amused and liked that there was a small hatch that could be opened between the boot and rear seat. It’s there so you can stow long objects without folding the seats down, but they just wanted to ‘post’ things into the boot.

In the boot there is more Volvo cleverness. The base of the boot can be folded up so that groceries can be hooked on so they do not spill everywhere plus there are cubby holes for bottles and a 12V outlet for a car fridge to keep items cold on your way home from the store. Under the boot floor was a space saver spare tyre. 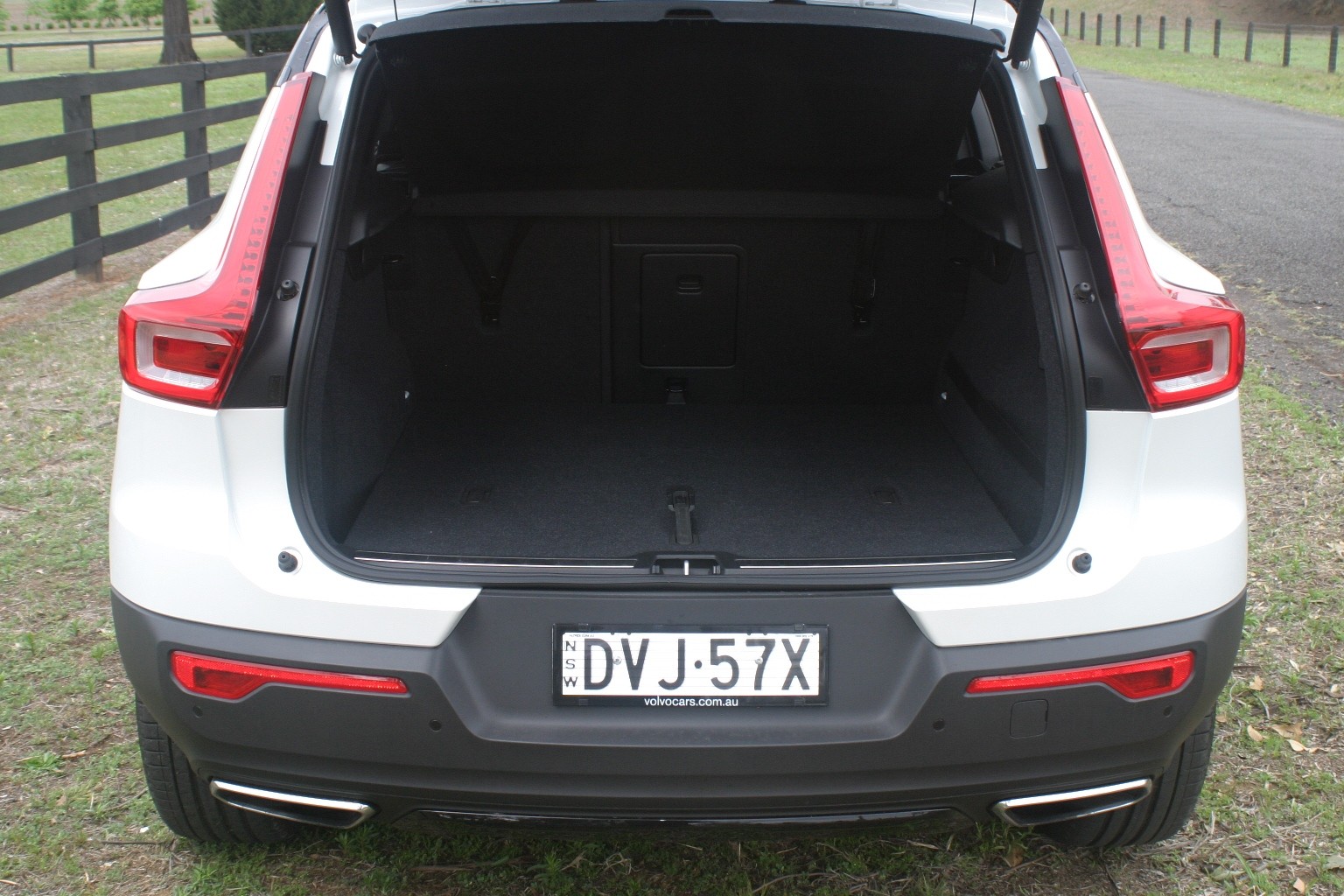 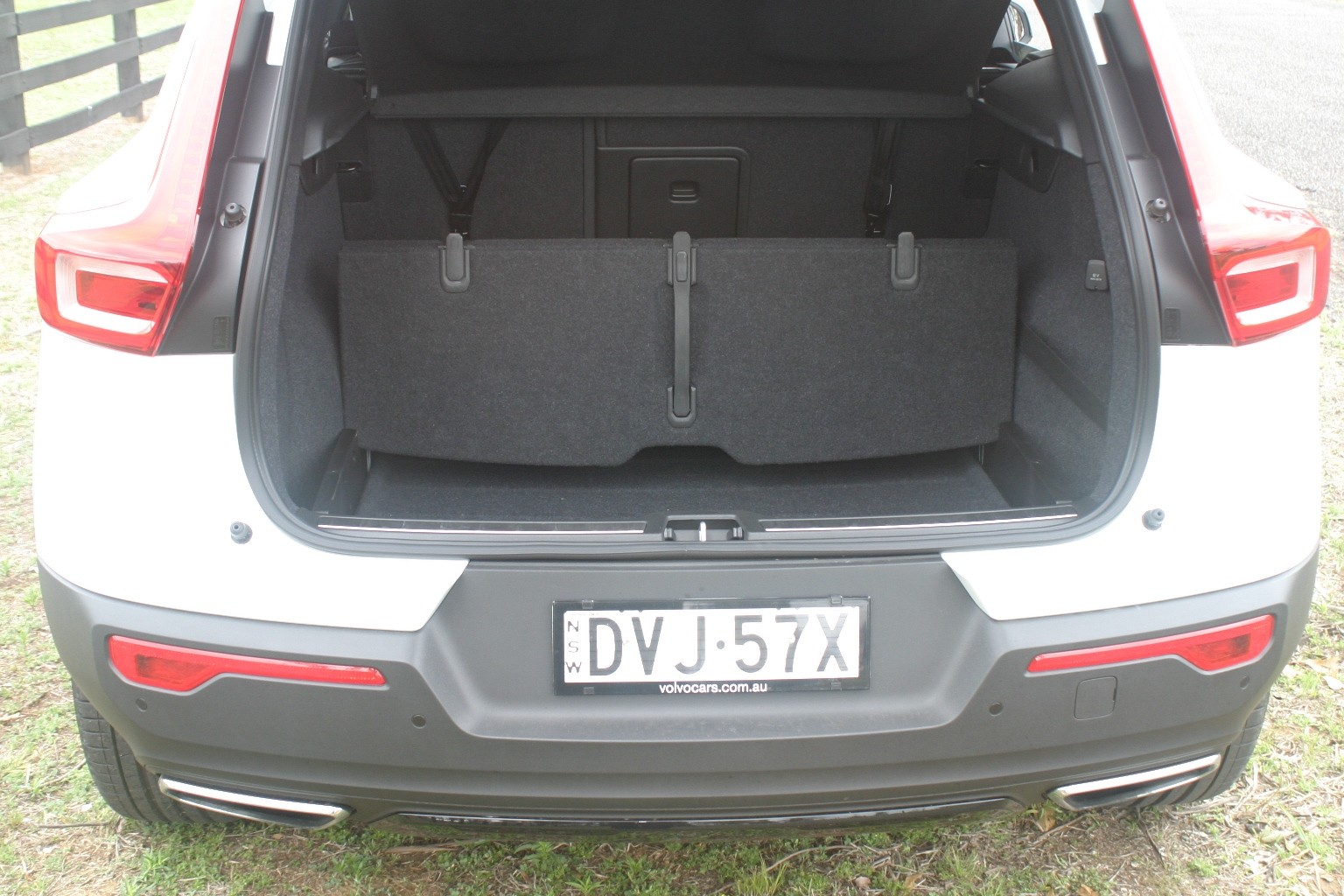 The XC40 has All Wheel Drive and an automatic 8-speed adaptive geartronic transmission and it drives beautifully and although there is some road noise from the tyres it is not excessive. The two litre, four cylinder turbo charged petrol engine did suffer a bit from turbo lag, but acceleration was still good for overtaking. The official fuel consumption figure is 7.7l/100km and I achieved 9.4l/100km, but I did spend the majority of my time in Dynamic driving mode. The other driving modes on offer are Eco, Comfort and Off-road.

There were only a couple of things that I didn’t like about the Volvo XC40. The brakes were too grabby and would get a bit ‘stuck on’ when manoeuvring at low speed, I’m not sure if this was part of the safety features or if they maybe needed a bit of adjustment? And although the 360o camera offered an excellent view for reverse parking if you wanted to use it while not in reverse you had to flick through the screens to find the button to press. I prefer having one button I can press on the dash that immediately brings up the cameras. 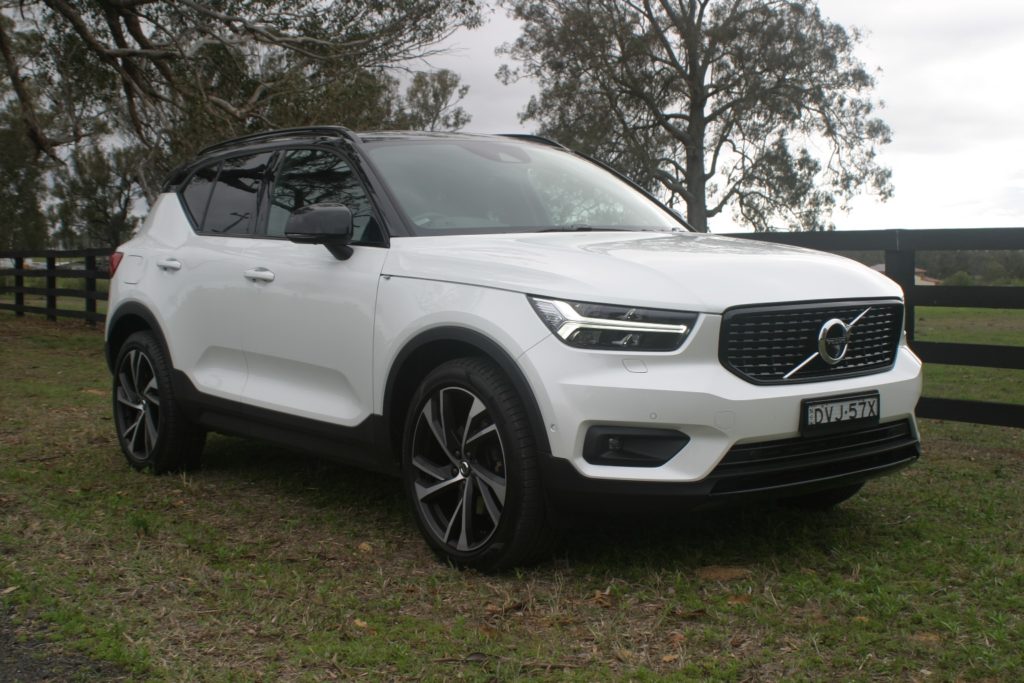 Overall I really liked the Volvo XC40 and I can see why it won the 2018 European Car of the Year Award. The designers have really thought about what we as consumers want in an urban SUV and the best part is all this Swedish brilliance is competitively priced at $56,740 plus on road costs ($57,890 as tested with metallic paint option). So if you are looking for a premium, mid-sized SUV I recommend you visit your preferred Volvo dealer and arrange a test drive for yourself.