Which Jag would you take?

The Jaguar XF Sportbrake First Edition 30d in Farallon Pearl Black or the Jaguar XE Portfolio 30t in Fuji White, which do you prefer? Both cars share much of the same technology and componentry under the skin. They are both built on the Jaguar Land Rover’s iQ [Al] modular aluminium platform, have an intuitive All-Wheel Drive system and an 8 speed automatic gearbox. 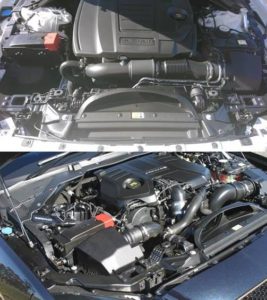 There not much space left under the bonnet in the XF, it’s all engine!

Due to its weight advantage of nearly 300kg the XE has a quicker 0-100km/h time of 5.7 seconds compared to the XF of 6.6 seconds. But both performed well under acceleration and completed overtakes effortlessly. The claimed fuel economy for the diesel engine is 5.9L/100km and I achieved 8.1L/100km. The petrol engine’s claimed figure is 6.7L/100km and I achieved 10.3L/100km. 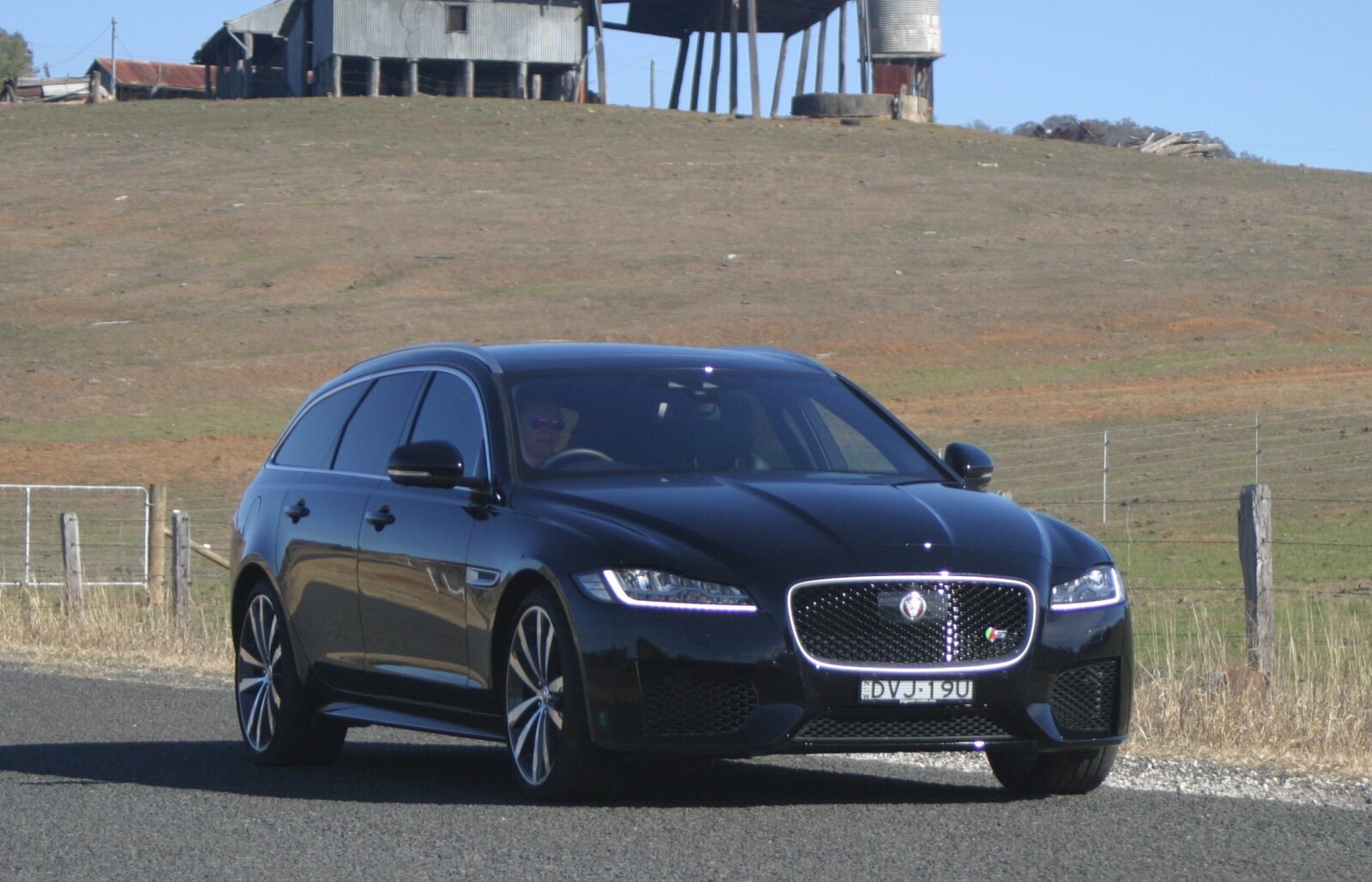 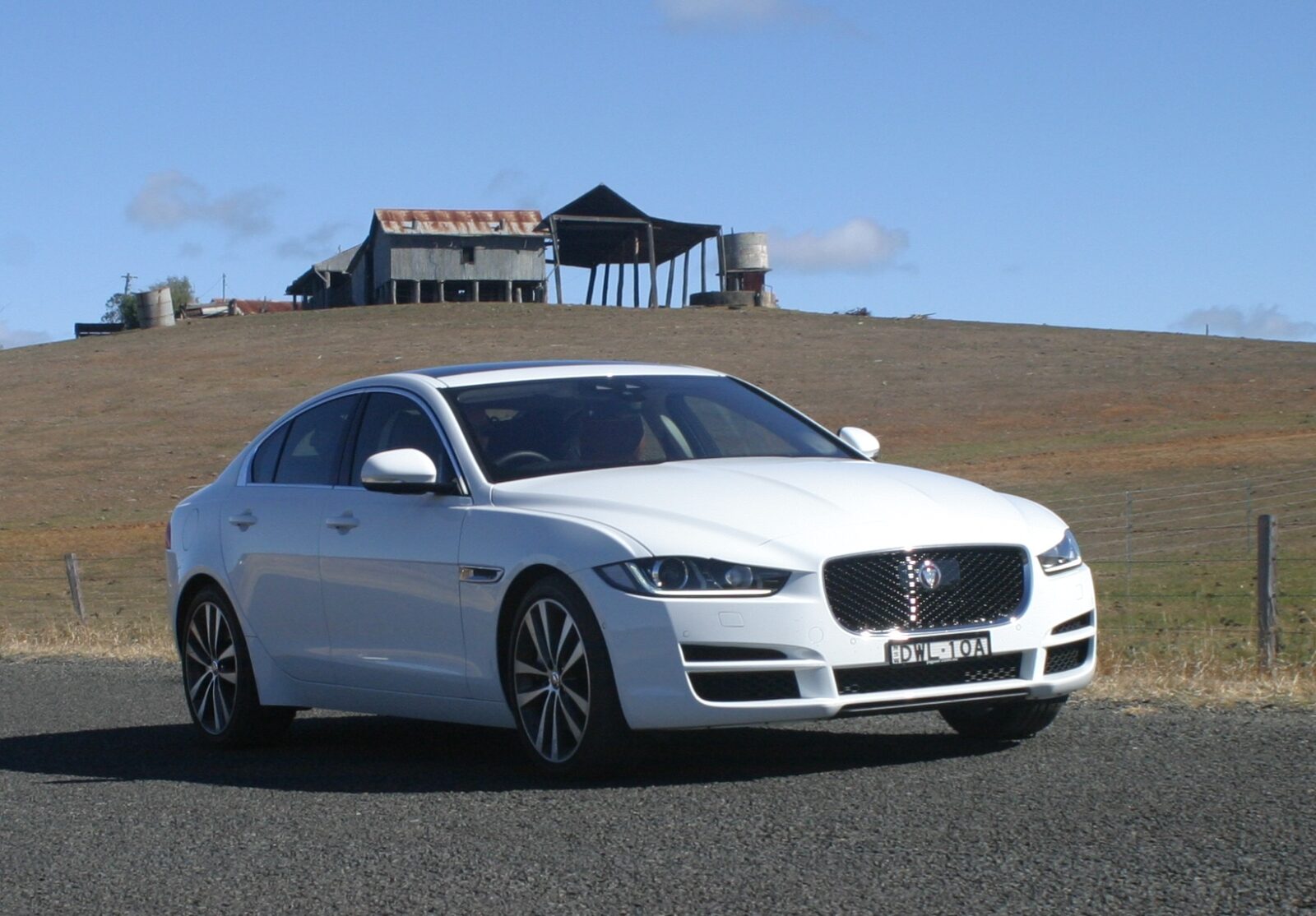 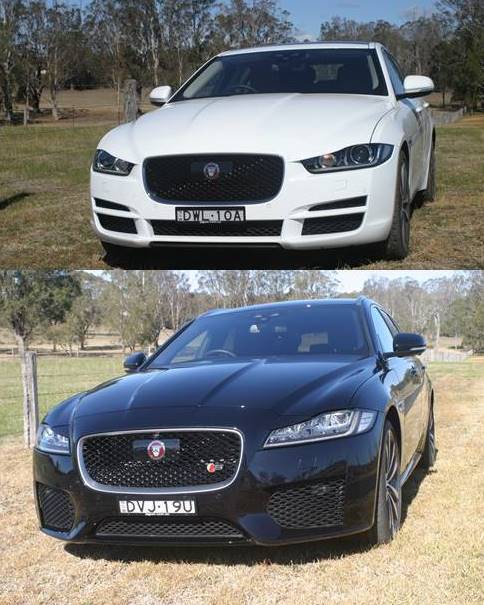 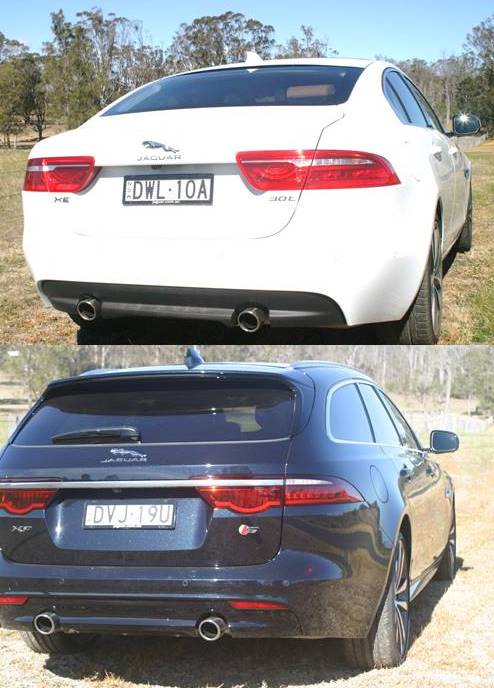 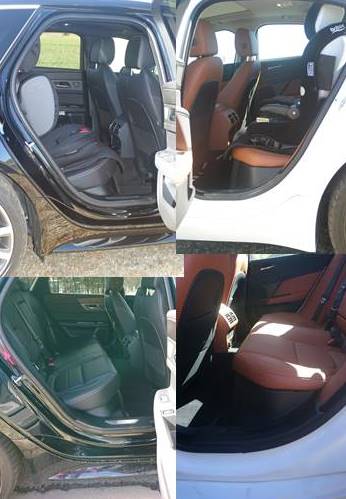 Both cars are good looking and offer a nicely balanced design, but the Sportbrake in black with the blacked out privacy glass ($950 option) and 20” alloy wheels ($2,790 option) was the better looking car in my eyes. The XF was also a lot more practical too and offered greater rear leg room thanks to the longer wheelbase.

The increased rear leg room made it easier for the children to get in and out of their car seats and meant the XF was comfortable for adults to sit in the back as well. Both cars had two ISOFIX points and three rear tether points for child restraints. The cars didn’t have a separate temperature control for rear passengers, which is something I would have expected to be present. 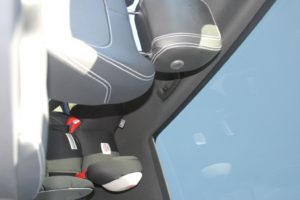 The panoramic sunroof in the XF Sportbrake.

The 1.6m2 fixed panoramic roof added to the spacious feel of the Sportbrake interior. It goes all the way back and really makes the car feel airy. The XE was fitted with a smaller sunroof that could be opened, an optional extra costing $1,890.

The load space of the XF was huge and it would easily swallow a large pram and the weekly shop. Officially the Sportbrake has 565 litres of boot space with the rear seats in place. This increases to 1,700 litres with the rear seats folded. The total space is two metres in length and over a metre in width at its narrowest point, plus there is additional underfloor stowage. The XE boot has only 455 litres of boot space and it is noticeably smaller as the weekly shop filled it full. 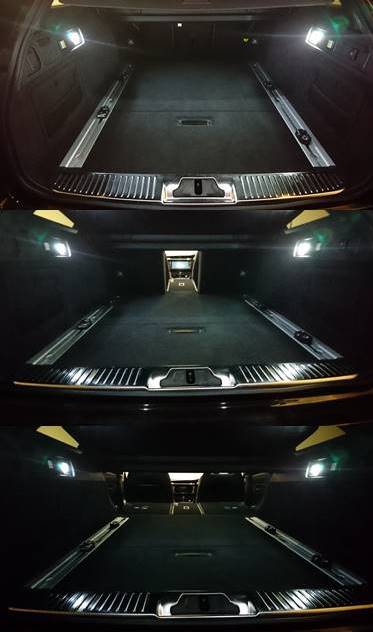 The XF boot with seats up, middle seat down and all seats down.

The XF Sportbrake has a powered tailgate as standard and tie down points in the boot to help secure your load ($320 option). The rear cargo blind automatically rises up when you open the tailgate to make it easier to load items in, which is a small but useful touch.

Both cars have convenient 40:20:40 split rear seats, so you can fold down the middle to fit in a longer item like gold clubs and still be able to use both rear seats. But for my children this feature was the peak-a-boo door and they enjoyed playing with it immensely.

The XF also comes standard with the Activity Key, which is like a rubber fitness watch that you can wear when doing outdoor activities. You can lock your car with the Activity Key and leave the normal key inside the car in a deactivated mode while you are off being active.

The suspension geometry of the cars is largely the same with Integral Link rear suspension and double wishbone front suspension. Both cars were fitted with Configurable Dynamics (a $1,210 option on the XE), this technology is from the F-TYPE and allows you to choose between comfort, sport and dynamic mode for increased throttle response, faster gear shifting and firmer steering. Selecting Sport mode in both cars automatically sets everything into dynamic mode and that’s where I stayed for most of my time with the Jags.

The XF comes standard with Adaptive Dynamics, which enables you to configure damper settings as well and I felt the ride in the XF was better for it, the ride comfort in the XE felt firmer than the XF. The XF Sportbrake also has self-levelling rear air suspension to ensure handling is maintained even when there are heavy loads in the boot.

Life on the inside of the Jaguar XE and XF includes a lot of leather and beautifully tactile finishes. When you press the start button the JaguarDrive Selector (the rotating gear knob) rises smoothly from the centre console and in the XF the air vents rotate open. The XF has 18-way adjustable front sports seats ($3,210 option), but I felt the leather was too hard for a premium car like the Jaguar. 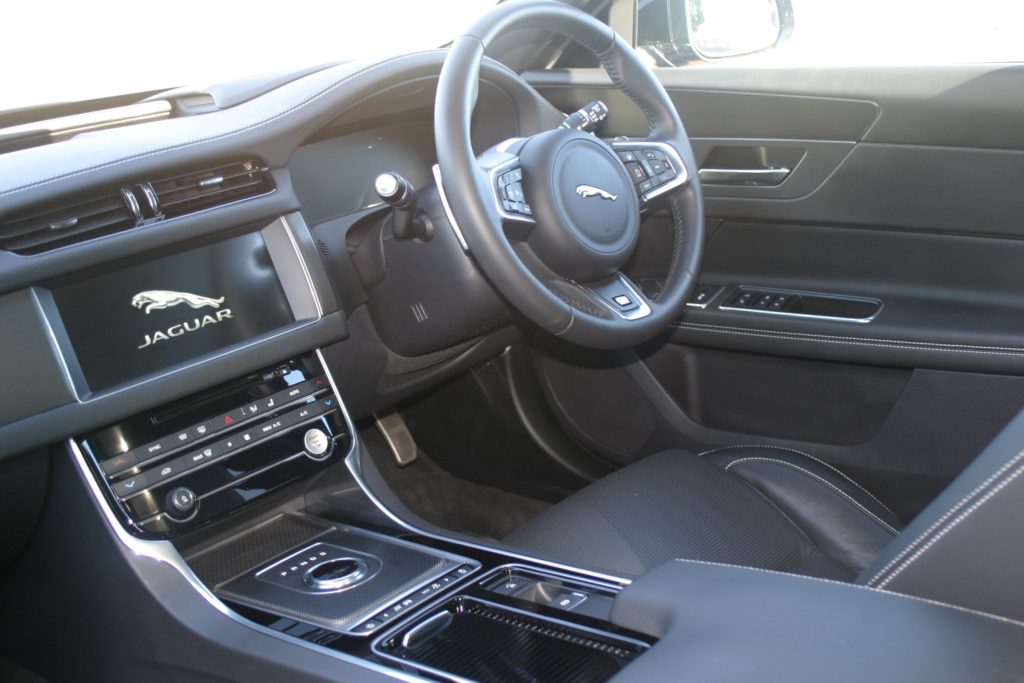 Naturally the black XF came with black interior and I do love the black on black look in a car. The XF had carbon fibre trim (a $3,470 option) that I didn’t really like; it was plain weave carbon and didn’t look authentic to me.

The XE interior – three colours in one interior is too many for me.

The XE on the other hand had tan leather interior, black carpet and an off-white roof lining; it was too much colour variation for my liking. I also didn’t like the dash design in both cars the way it has a crease below the windscreen all I could think about was how annoying that area would be to dust.

Both cars were fitted with the Cold Climate Pack that includes heated windscreen, front and rear seats and steering wheel. I thought that heated seats were the ultimate luxury in winter, but I was wrong a heated steering wheel is, especially if you suffer from cold hands like me. Interestingly this option was almost $500 cheaper on the XE ($2,090) and included heated washer jets as well.

Infotainment features in the XF included the standard fitment of a 10.2” touchscreen, 12.3” Interactive Driver Display and Navigation Pro. The 10.2” screen on the XE was an extra $1,420 plus another $3,790 for the 12.3” driver’s display and Navigation Pro, but this also included the Meridian surround sound system, which is superior to the standard 380W sound system in the XF. Both cars had a DAB radio ($580 option in the XE), Bluetooth, 10GB of usable memory to store your music in the car and a CD/DVD drive.

The 12.3″ driver display can be configured multiple ways including a full map view. 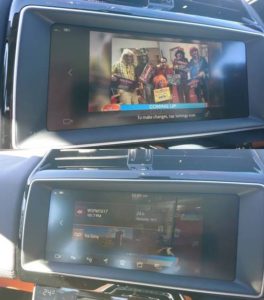 The XE also had a digital TV ($1,710 option) and normally I would think why bother with a TV in the car as you can’t watch it while you are driving anyway so what is the point? But the Jaguar display screen has a feature called dual view that enables the passenger to see the TV picture while the driver can see the navigation information. What about the audio? It is transmitted wirelessly to head phones the passenger can wear. I didn’t get to try the headphones out as I only discovered this at the last minute when I looked in the glove box and saw the headphones. But I did try out the dual view screen and it’s quite freaky how it works.

From a connectivity perspective the XE and XF have older technology compared to the E-PACE I drove a few weeks ago. In the front there was one 12V socket, two USB points and a HDMI socket, while the rear seat passengers only get two 12V outlets, whereas in the E-PACE there were three USB outlets in the back. In the boot of the XF you also get an additional 12V outlet ($240 option), which would be great for a car fridge. The XE was fitted with the Incontrol Connect Pro Pack ($970), which among other things creates a Wi-Fi hotspot in your car.

The ambient lighting in the XF.

Both cars had the configurable ambient lighting option ($40 more expensive in the XE at $580). This enables you to choose between ten different colours to set the mood of your car. My preference was for the cool colours like purple and blue.

Standard on the XF is the Head-Up display (a $2,060 option on the XE) that projects vehicle speed, navigation and cruise control information on to the windscreen just below your eye line. It enables you to see what speed you are doing and where you are going without taking your eyes off the road. The display in the Jaguar looks a bit dated compared to some of the more modern systems on offer by other car brands.

Many safety features such lane departure warning, emergency braking and 360o surround camera system with front and rear parking aids are standard on the XF. This camera system also helps you see around intersections. My XF was also fitted with the Active Safety Pack ($4,360 option) that includes blind spot assist, this feature will steer you away from traffic if the car feels that you are changing lanes too closely to a car beside you. I tried it out and it works very well as does the adaptive cruise control with queue assist (a $1,840 option on the XE).

The XF also comes standard with adaptive LED headlights, which turn around corners and also automatically dim high beam for oncoming traffic. The automatic dimming works really well and at no time did I need to override it while driving at night.

Some of the other features I liked about both cars included the felt that lined the door pockets; it helped reduce rattles from the many items that my children insist on bringing into the car. Also the storage area in the rear passenger arm rests was big enough for a smart phone. Speaking of rattles the XF had none, but the XE did have a couple of rattles from the interior trim.

I loved the look of black XF Sportbrake; to me it was very badass with the privacy glass and 20” wheels. But the white XE was easier to live with because you didn’t feel the need to wash it every day in order to keep it looking good. 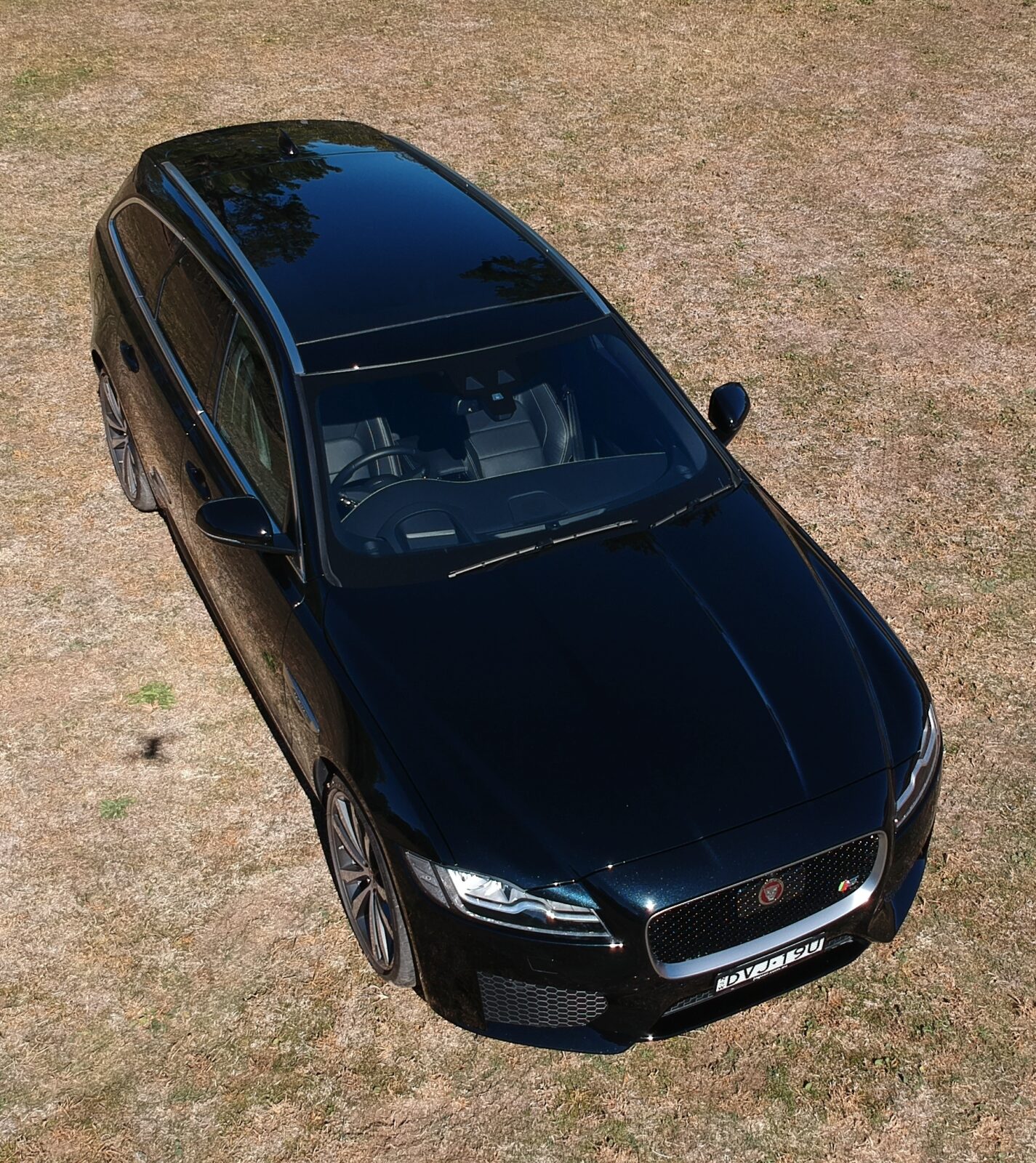 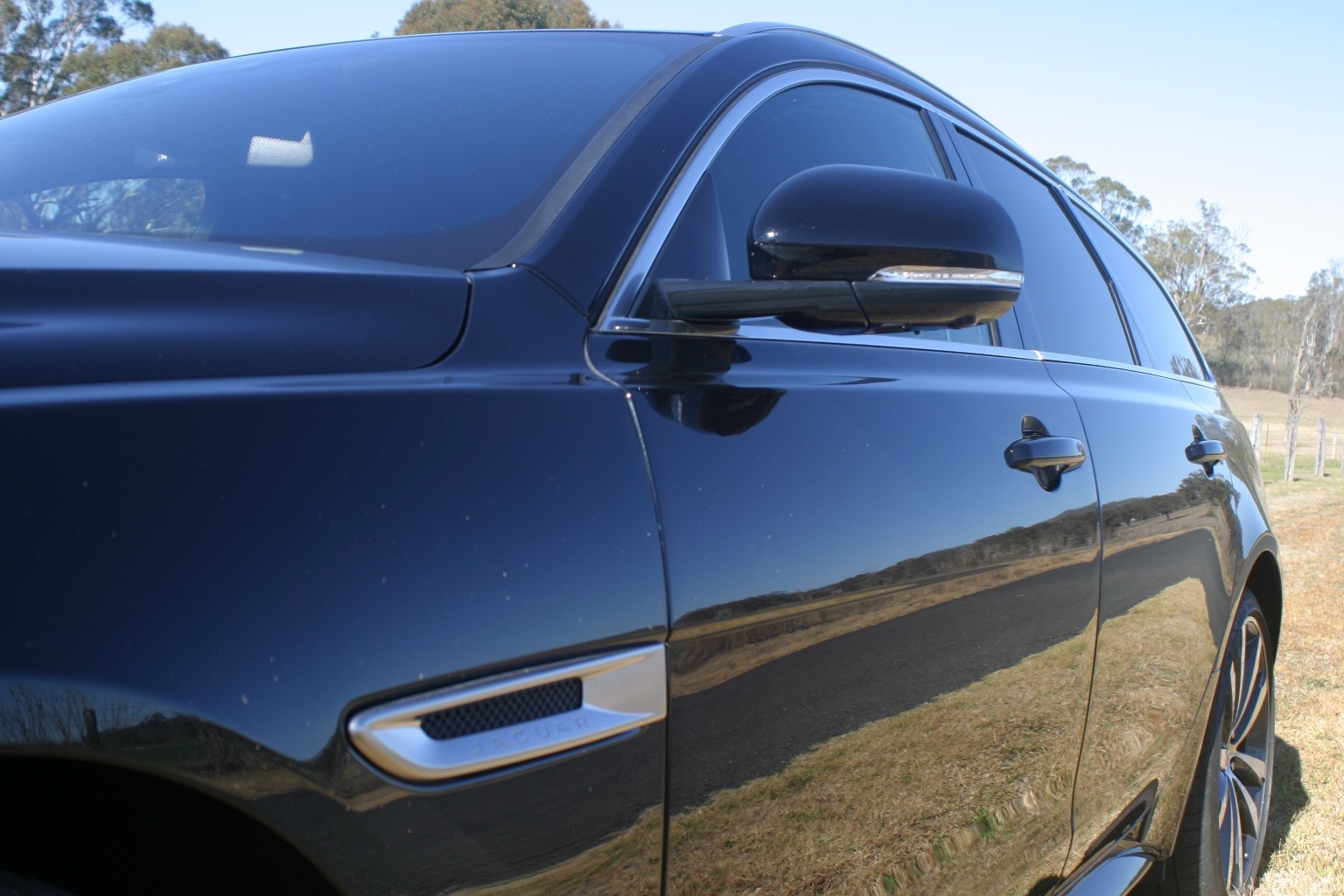 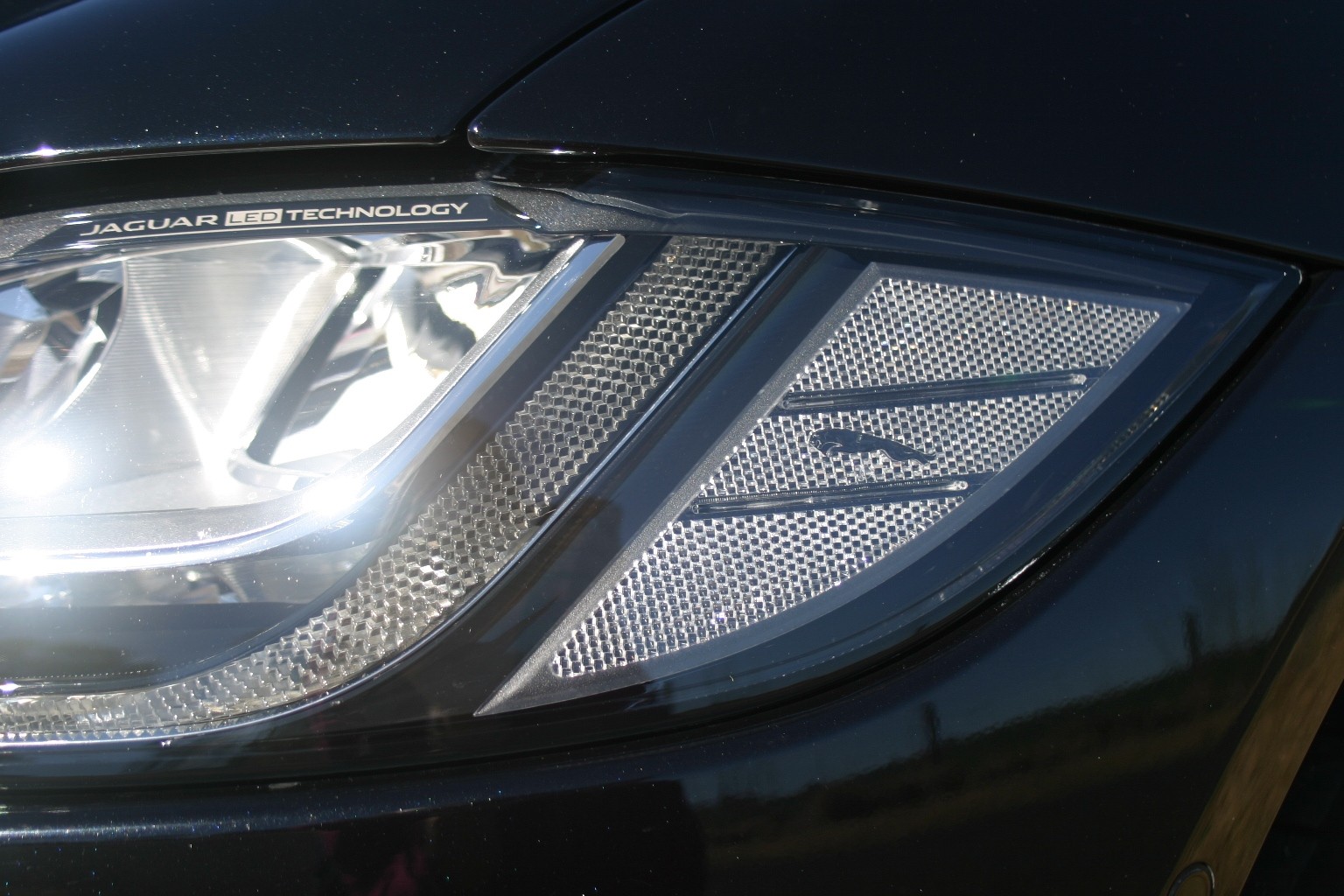 But I also preferred the Sportsbrake for the room it offered both for rear passengers and in the boot plus the efficiency and quietness of the diesel engine was exceptional. Although the in-car technology is not up to the latest generation, it still does the job required. The Jaguar XF comes standard with many features that a premium car buyer would expect and it’s my pick from this comparison.

For more information about the Jaguar model range contact your local Jaguar dealer.