The Essence of EV driving 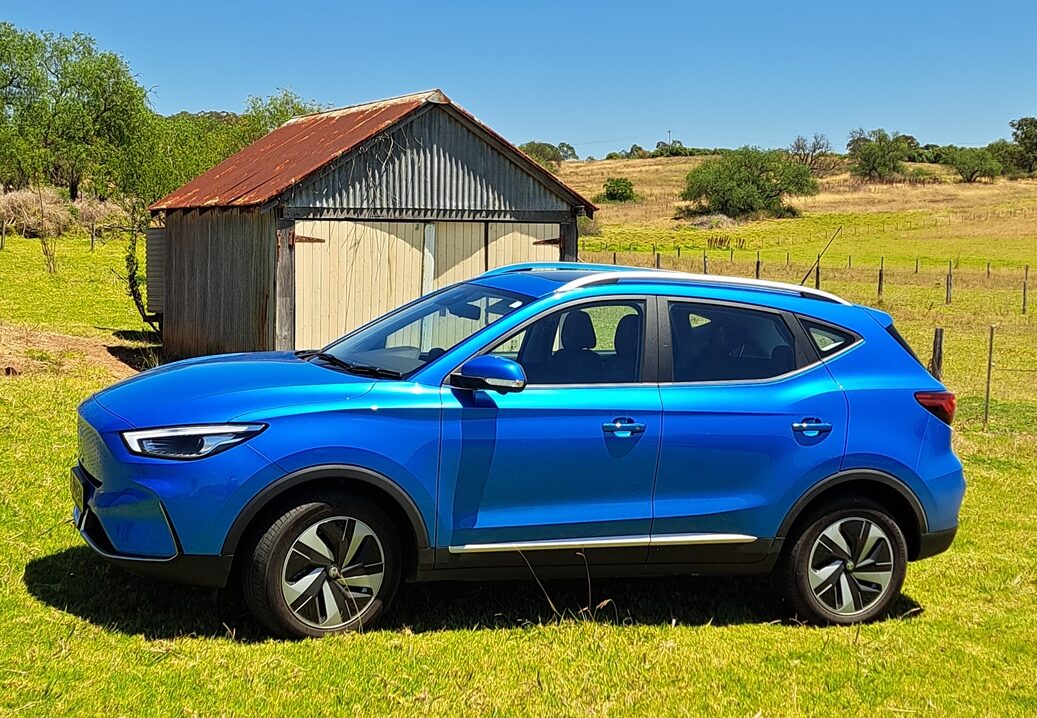 The MG ZS EVs are among the cheapest electric cars currently on sale in Australia, with the Excite variant available from $46,709 drive away in NSW. The basic premise of the ZS EV is to make electric vehicles (EVs) more attainable for a larger portion of the Australia population.

To get to know this nice-looking budget EV option better I spent the Christmas break driving the higher specced ZS EV Essence SUV that starts at $49,709 drive away. With the optional Brighton Blue metallic paint ($700) this ZS EV was $50,409 drive away in NSW according to current pricing on the MG Australia website.

The first thing anyone asks when I am driving an EV is “what is the range”?

The claimed range for the MG ZS EV is 320 kilometres and for my month with the ZS EV Essence I drove over 800 kilometres on both highways and B-roads in wet and dry conditions and used an average 17.97kWh/100km, giving me a real-world range of 280 kilometres. There are three drive modes in the MG ZS, Eco, Normal and Sport, with three levels of KERS for the regenerative braking. The selections are made using the buttons above the rotary gear selector on the centre console and I spent the majority of my time driving in Normal mode with the maximum KERS setting.

The MG ZS EV is powered by a 50.3kWh, liquid-cooled, lithium-ion battery, and the Synchronous Motor has 130kW of power and 280Nm of torque with drive going to the front wheels. MG claims a 0-100km/h time of 8.2 seconds and even so, I felt the Essence was not that dynamic to drive. I did find that the ride was comfortable for urban use and better than the MG HS Plus EV Excite that I have previously driven.

The MG ZS charge ports are located at the front of the vehicle and I solely charged at home using the Type 2 port and a 7kW Go Cable plugged into a standard 240V power point, which is the slowest way to charge your ZS EV. When you plug the cord in it makes a locking sound to indicate the cord is properly attached and the lights adjacent to the port either light up blue or green. Blue lights indicate scheduled charging is in use, so the MG will only charge between times that you have programmed into the infotainment system. Green lights indicate that charging is in progress and on the driver’s dash it shows the percentage charged and when the charging is estimated to be completed.

For faster at home charging MG owners can install a wallbox with either a 7kW single-phase or 11kW three-phase output type. These wallboxes are available in three vibrant colours and using the 7kW fixed wall charger and MG Australia states that it takes an estimated 8 hours to fully charge the ZS EV. The Type 2 plug can also be used for vehicle-to-load using a V2L connector accessory, which is available at your authorised MG Motor dealership, and this allows you to power some 240V electrical equipment from your MG.

The CCS port is used for rapid charging at public charging stations and the MG ZS EV will take 54 minutes to reach 80% in from a DC rapid charging point according to MG Australia. The locations of charging stations are available in the Satellite Navigation system of MG ZS EV, although MG recommends regular online updates to keep this accurate. Alternatively, there are a number of third-party applications that can be downloaded to smartphone devices such as Plugshare which are regularly updated with the latest charging stations, charging station type and location.

The seats in the ZS EV Essence are covered with synthetic leather and do get quite hot when the MG is parked out in the sun. The front seats are cushy to sit on, but are comfortable enough, and they are heated for when you do need warm seats in winter. The driver’s seat has powered adjustment for recline, forward/back and seat height with no memory positions and the passenger seat has manual adjustment only for recline and forward/back.

The 10” central touch screen connects to your phone via wired Apple CarPlay and Android Auto with the USB-A port for this located in the cubby at the front of the centre console. An annoying feature of the satellite navigation was it would bong every time I entered a new suburb and I could not work out how to turn this off.

In the cubby at the front of the centre console there is also wireless charging for compatible devices, one 12V outlet and one USB-C port. Other media sources include DAB+ FM radio that would randomly drop out as I was listening to it, USB music, and Bluetooth that would not always automatically connect to my phone, so I would have to stop and reconnect it when I realised that the connection had failed.

The driver gets a digital dash display that can be customised to their personal preferences using the buttons on the steering wheel. The steering wheel also has a button for voice control, but when I pressed this nothing happened.

I liked the carbon fibre look pattern across the dash and the panoramic sunroof that opened to halfway. There is also adequate storage in the ZS EV cabin with good-sized drink bottle cubbies in the front and rear doors and two different depth cup holders in the centre console under a roller cover. In the base of the cup holders there was a removable rubber mat for easy cleaning and on one side a wireless charger for the key fob. You will hardly ever need to remove the key fob from your handbag because the ZS EV has keyless entry for the front doors and keyless start.

The ZS EV only has single zoned climate control and the temperature is adjusted in one-degree Celsius increments. On a hot sunny day, the climate control system did struggle to bring the cabin temperature down. On the upside there are two central air vents for rear passengers with manual open/close and direction control.

The rear seats have ample head and leg room for me, but taller people may find it a bit tight and there is no fold down arm rest in the centre seat. There are two ISOFIX/three rear tether child seat restraint points in the ZS, but I think there would only be enough room for two car seats to be fitted. Below the rear air vents there is one USB-A and one USB-C port to charge the children’s devices and the low transmission tunnel would make it easy for children to move across the rear seat. Even though there are rear floor mats there is not one over the transmission tunnel so the carpet may become worn over time.

The ZS EV has a power assisted manual opening/closing tailgate using the MG emblem to open the boot, something I think feels like it would not last the test of time. The boot is deep and I was able to carry two bales of hay home in it by removing the parcel shelf. For normal use it is a good size for the weekly shop, but if you had to put a pram in the boot as well there would not be mush left room for groceries unless you put them on top of the pram. The boot has one light and no hooks or tie down points and under the boot floor there is a tyre repair kit and a space to store the charging cable. The MG ZS EV does not have a front boot as the motor is located under the bonnet.

The current MG ZS EV models do not have an ANCAP safety rating, but do come with six airbags and MG PILOT active safety. MG PILOT in the Essence includes Forward Collision Warning, Automatic Emergency Braking, Lane Keep Assist with Departure Warning, Blind Spot Detection with the camera image displayed on the infotainment screen when you indicate, Rear Cross Traffic Alert, and Adaptive Cruise Control. The Adaptive Cruise Control is set via a stalk behind the left-hand side of the steering wheel and when I was using it on the motorway, I found it was a bit slow to react when I changed lanes and on one occasion while I was driving a warning was displayed on the digital driver’s dash to tell me the adaptive cruise/forward collision system was not working and I did not know why this warning came up.

The ZS EV Essence also comes with a 360o camera combined with a standard reversing camera, but no front or rear parking sensors, only guidelines and the ZS EV did not emit a sound when I was reversing to warn nearby pedestrians. The Essence does have auto lights and is listed to have rain sensing wipers, but these did not work for me.

All MG EV and PHEV models come with a seven years/unlimited kilometre vehicle warranty and a battery warranty that covers the same period for non-commercial use. MG Motor Roadside Assist applies for the same seven-year period for 24 hours a day, 7 days a week, 365 days a year peace of mind. The MG ZS EV service schedule is once a year or every 10,000km, whichever occurs first, and for MG Precise Servicing pricing visit the MG Australia website.