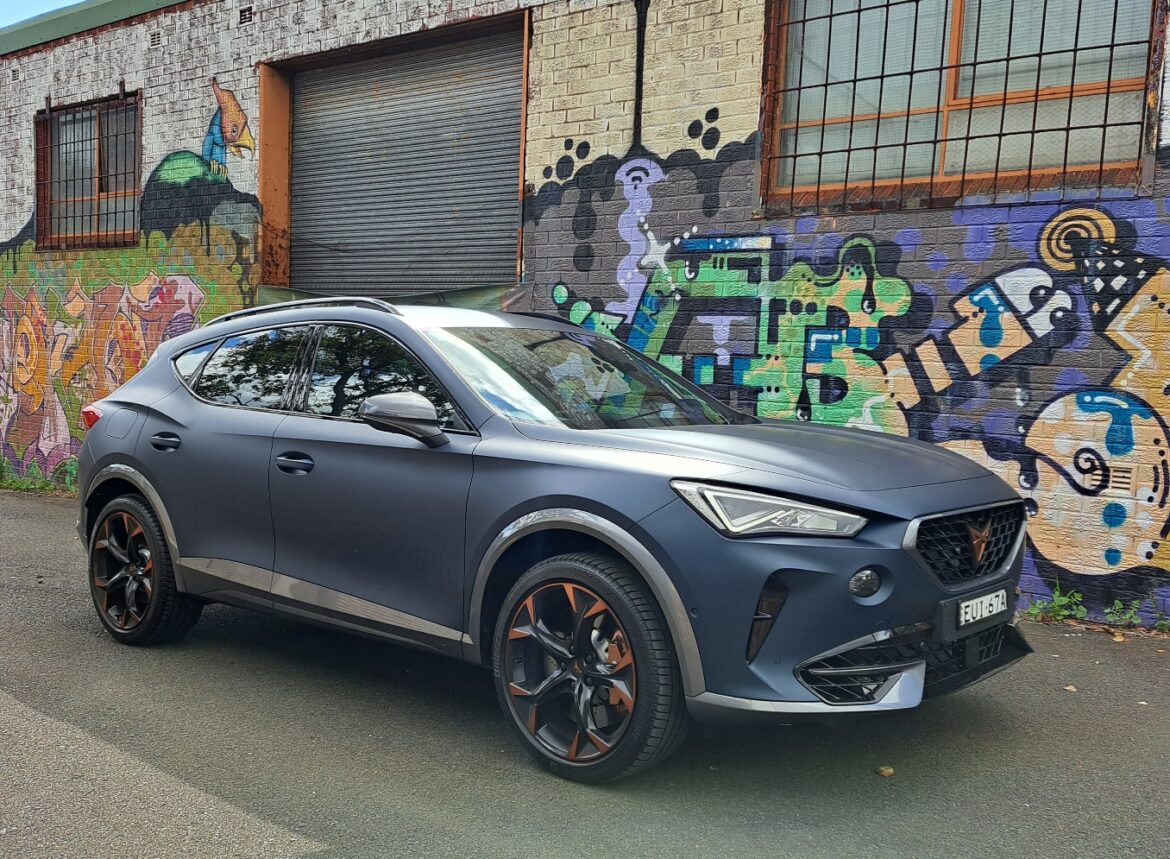 Cupra has arrived in Australia, bringing with it a selection of vehicles to introduce Aussies to the high-performance offshoot of the mainstream Spanish car maker, Seat – pronounced si-at. The Cupra range in Australia currently includes three petrol vehicles, with the Formentor also having a plug-in hybrid option, and the electric Cupra Born hatchback is coming soon.

This is the Formentor VZx, a mid-sized performance crossover, with loads of character. The combination of the optional Petrol Blue Matte paint ($2,300) with copper highlights makes for a striking appearance on the road and the number one comment from on-lookers about the Formentor was “love the shape”. Add to this the optional ($4,150) Performance Brake Package with Brembo calipers and you have a seriously capable machine.

The 7-speed Direct Shift Gearbox (DSG) can be ‘manually’ changed using the steering wheel-mounted paddle shifters. But the problem for me with the paddle shifters was they were too far back from the wheel and I could only reach them with my fingertips. The other slightly annoying thing was there were no pops and bangs from the exhaust under hard acceleration or deceleration.

The graphics on the 12″ Infotainment and navigation system are nice also, except I did not like that the start/stop function was under an infotainment menu and not a button on the centre console or dash for easy access. The infotainment system can be accessed using voice control, but this did not work for me for any of the operations I normally request, phone calls, changing media and setting a destination on the sat nav. You can switch between the media sources, AM/FM radio, Bluetooth and My Media, via another button on the steering wheel though and enjoy the music on the Beats sound system with nine speakers, subwoofer and 340w amplifier.

I liked the smell, look and feel of the Petrol Blue bucket seats with leather appointed upholstery. Both front seats are heated as is the steering wheel is heated as well, something you will appreciate in winter. The driver’s seat has power adjustment for recline, forward/back, seat height and 2-way lumbar adjustment with three memory positions. While the passenger seat only has manual adjustment for recline, forward/back and seat height.

Being the Cupra comes from the VW family the cabin storage is plentiful. There are good sized drink bottle holders in the front door cubbies, two rigid cup holders in the centre console with one slimmer/taller than the other. Under arm rest is a 12V outlet and in the cubby at the front of the centre console is the wireless charging pad that also connects wireless Apple CarPlay/Android Auto to the infotainment system. Above this cubby there are two USB-C ports for wired charging and connection, if required.

The rear seats have adequate head and leg room for two adults and there are two ISOFIX/three rear tether child seat restraint points, but only enough room for two car seats due to the width of the Formentor. The centre seat can be folded down as an arm rest with three different sized rigid drink holders in it and there are good sized drink bottle storage cubbies in each rear door.

Rear passengers can adjust their temperature using the digital temp control, or the temp can be adjusted/locked from the front climate settings as well. The two central air vents have manual on/off and direction control and below the vents there are two USB-C ports. The VZx does have rear mats, but no mat over the broad transmission tunnel so this carpet may be worn and scuffed over time.

The Formentor VZx has a powered tailgate with an open/close button on the tailgate and in the cabin and an open only button on the key fob. The boot size is good for a weekly shop or a pram and a couple of shopping bags and if more space is required the rear seats have a 40:60 split folding mechanism with a manual release located in the boot. If longer items need to be carried there is a ‘peek-a-boo’ door in the central seat. Located in the boot space are four substantial tie down points, four hooks and a light, but no 12V outlet. Under the boot floor there is a tyre repair kit in case of a tyre deflation.

All variants in the Cupra Formentor range have a 5-star (2021) ANCAP safety rating with an Adult Occupant Protection score of 93% (35.56 out of 38) and a Child Occupant Protection score of 88% (43.61 out of 49). Passive safety includes driver and passenger airbags, knee airbag (driver), side airbags (front & rear), curtain airbags and a centre airbag. For convenience the VZx comes with a standard rear-view camera with front and rear sensors, auto lights and auto wipers.

The Cupra Formentor is fitted as standard with a range of safety assist features including adaptive cruise control, autonomous emergency braking (AEB), a lane support system (LSS) with lane keep assist (LKA) and emergency lane keeping (ELK) functionality, and blind spot monitoring (BSM) with rear cross traffic alert. I liked how the BSM was incorporated as part of the ambient lighting strip along the door and flashed orange when a vehicle was detected.

All new Cupra’s come with a 5-year unlimited kilometre warranty and 5-years Roadside Assist that gives you 24-hour roadside assistance, emergency accommodation, car rental, and towing.  The service intervals are every 15,000km/12 months (whichever occurs first) for all Cupra models and 3-years servicing was included in the purchase price of the Formentor up until 31 December 2022. Contact one of the nine Cupra garages for more info about the servicing costs.

The Cupra Formentor VZx hit the spot from a looks and performance perspective and really made a good impression on me. The base price for the VZx is $66,490 driveway and as tested with the Matte Paint and Performance Brake Package this Petrol Blue Formentor VZx was $72,940 drive away. You can order a Cupra on-line or visit a Cupra garage for more information about this Spanish heartthrob.