The Ferrari V12 lives on in the all-new Purosangue 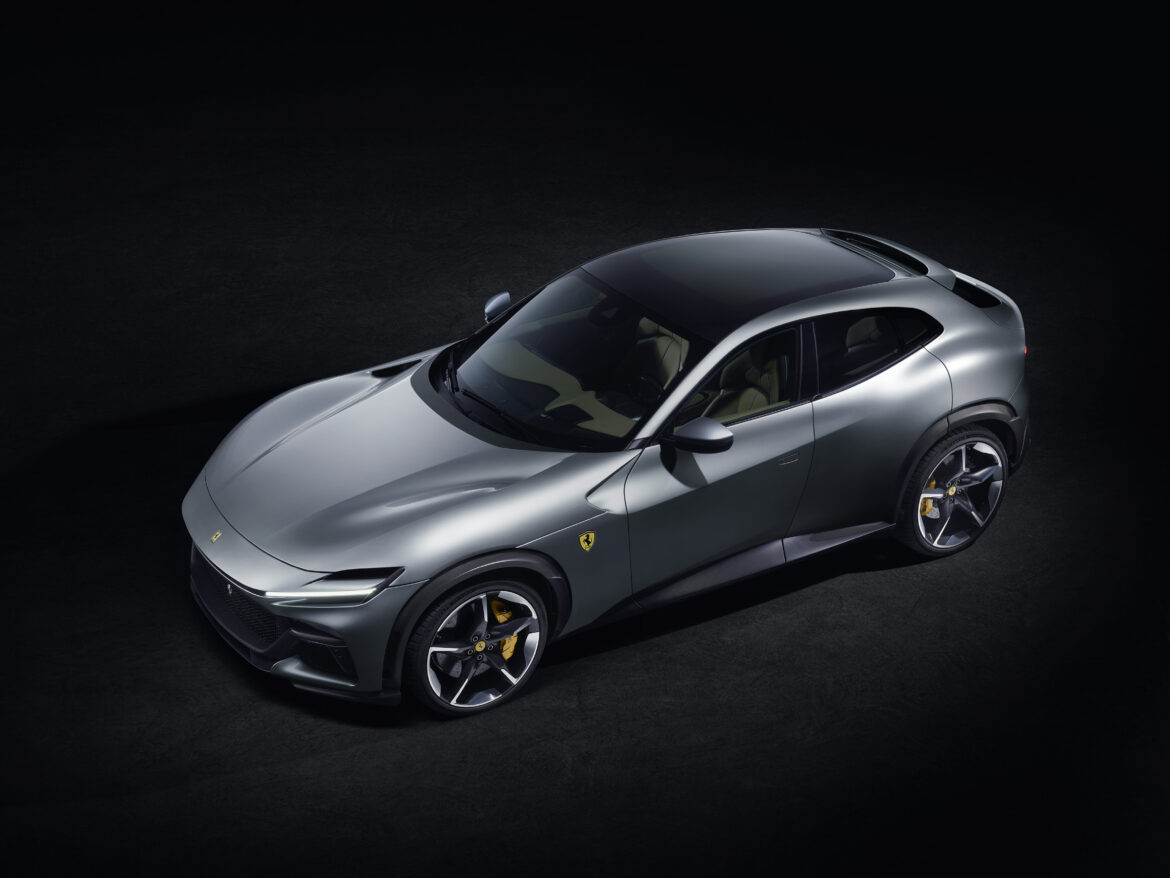 After years of anticipation by the international automotive fraternity, Ferrari have unveiled the Purosangue, the first ever four-door, four-seater car in the Prancing Horse’s 75-year history and it will be powered by the iconic Ferrari V12 engine!

Ferrari has created a car that is unique on the world stage: not only do performance, driving pleasure and comfort coexist in perfect harmony, but it is also a peerless encapsulation of the Prancing Horse’s iconic DNA. This is the reason why the name Purosangue, Italian for ‘thoroughbred’, was chosen.

The Purosangue stands head and shoulders above the rest of the market thanks to its performance and comfort. It is the only car with these proportions to sport a mid-front-mounted, naturally-aspirated V12. Maranello’s most iconic engine debuts in this brand new configuration to ensure the car unleashes more power than any other in the segment (725 cv) whilst guaranteeing the most enthralling Ferrari engine soundtrack. Furthermore, it can deliver 80% torque even at low revs for unique driving pleasure at all times.

The Purosangue’s engine (code-named F140IA) maintains the architecture that made the Prancing Horse’s most recent 12-cylinders so successful i.e. a 65° angle between its cylinder banks, a 6.5-litre capacity, dry sump and high-pressure direct injection. It was designed, however, to produce the highest amount of torque at low revs possible without losing the feeling of linear, never-ending power typical of Ferrari’s naturally-aspirated V12s. 80% of the maximum torque is on tap at just 2100 rpm and it peaks at 716 Nm at 6250 rpm. Maximum power of 725 cv is reached at 7750 rpm and throttle response is characteristic of a real sports car.

The Purosangue offers class-leading performance figures (from 0 to 100 km/h in 3.3 s and from 0 to 200 in 10.6 s); the driving position and the heady, naturally-aspirated V12 soundtrack deliver an entirely new yet also entirely Ferrari driving experience.

To enable the company to achieve the ambitious goals set for this project and create a car worthy of a place in its range, a completely different layout and innovative proportions compared to modern GT archetypes (so-called crossovers and SUVs) were adopted. The average modern GT’s engine is mounted forwards in the car, almost straddling the front axle with the gearbox coupled directly to it; this results in less than optimal weight distribution that delivers driving dynamics and driving pleasure well short of the standards of excellence to which Prancing Horse clients and enthusiasts have become accustomed.

The Purosangue, on the other hand, has a mid-front-mounted engine with the gearbox at the rear to create a sporty transaxle layout. The Power Transfer Unit (PTU) is coupled in front of the engine to provide a unique 4×4 transmission. This delivers exactly the 49:51% weight distribution that Maranello’s engineers deem optimal for a mid-front-engined sports car.

Ferrari has also given the Purosangue the very latest iterations of the vehicle dynamic control systems introduced on its most powerful and exclusive sports cars, including independent four-wheel steering and ABS ‘evo’ with the 6-way Chassis Dynamic Sensor (6w-CDS). Making its world debut is the new Ferrari active suspension system. This very effectively controls body roll in corners as well as the tyre contact patch over high-frequency bumps to deliver the same performance and handling response as in one of the marque’s sports cars.

The all-new chassis has a carbon-fibre roof as standard to keep weight down and lower the centre of gravity. Redesigning the bodyshell from scratch also meant the designers could incorporate rear-hinged back doors (welcome doors) to make ingress and egress easier while keeping the car as compact as possible.

The cabin has four generous heated electric seats that will comfortably accommodate four adults. The boot is the largest ever seen on a Ferrari and the rear seats fold to increase the luggage space. Naturally enough, the Purosangue has a more commanding driving position than other Ferraris, but the configuration is the same as on every other Ferrari. As a result,the driving position is still intimate and close to the floor to provide greater connection to the car’s dynamic capabilities.

The Purosangue’s cabin demanded absolutely meticulous design of both the space and furnishings as well as careful selection of the materials used to offer unprecedented occupant space and comfort for a Ferrari four-seater. The cabin looks and feels like an extremely elegant, sporty lounge. For the first time the car also offers compatibility with Android Auto and Apple CarPlay systems as standard. These substitute the traditional built-in navigation system.

When the doors are opened, a surprisingly generous amount of space is revealed. Equally surprising is the sophisticated luxury of the interior which exudes a sense of both elegance and modernity. Modern design languages harmoniously combine with Ferrari’s signature GT sports car aesthetic. All of the forms are deliberately compact to optimise both the available space and its ergonomics.

The driver’s cockpit is inspired by the SF90 Stradale and is almost exactly mirrored on the passenger side. This creates an unparalleled feeling of emotional engagement for the front passenger, aided and abetted by a 10.2” display that provides all the information required to help them participate in the driving experience. The Purosangue features the entirely digital interface already adopted for the rest of the range.

The Purosangue’s interior architecture is based on the dual cockpit dashboard concept which has been extended and replicated in the back of the car, creating four areas quite distinct in terms of their functionality, volumes, materials and colours. This principle drove the cabin’s composition which develops horizontally and seamlessly between the furnishings, making the space seem larger and keeping the volumes light and dynamic.

For the first time in Ferrari history, the cabin has four separate and independently adjustable seats. The integration of comfort-focused components, the use of variable density foams, and the new suspension system mean that the Purosangue delivers unprecedented occupant comfort and a layout that exudes the sportiness and elegance typical of Ferrari’s design language. The heated backseats can be adjustable and reclined independently. When fully raked forwards, they significantly increase the Purosangue’s luggage capacity.

The Burmester® 3D High-End Surround Sound System also makes its debut in a Ferrari vehicle as standard equipment. This audio system delivers ultimate performance from low to high frequencies, achieved by innovative technologies. The ribbon tweeter makes its first appearance in any production car, and the subwoofer is housed in its own closed cabinet for ultimate bass clarity, power and speed combined with breathtakingly low frequencies. 3D sound, plus additional pre-sets, offers an immersive, exciting and high-quality sound experience that mirrors the car’s unique character and thus the very essence of the automotive masterpieces produced in Maranello.

The Purosangue offers a vast range of optional content and personalisation choices that will allow every owner to strike the perfect balance between comfort and performance. Aside from a huge array of exterior and interior colours, including some specific to the model, further innovative solutions have been introduced that are new to the Ferrari range or indeed the market as a whole.

In a Ferrari first, owners are being offered the opportunity to personalise the roof of their car: they can opt for a full-length electrochromic glass roof instead of the carbon-fibre version offered as standard. The glass is coated on its lower surface with an electro-sensitive film. When a small electric current is passed through the film, it changes its tint level to either flood the cabin with sunlight or provide shade where necessary.

The massaging front seats feature 10 air bags that deliver a relaxing, targeted massage with a choice of five different types of massage and three levels of intensity. In an absolute first for the Ferrari range, the Purosangue also has an air quality sensor that can check the air outside the car and improve quality in the cabin by smart air recirculation control and use of filters that can prevent particles of up to PM2.5 from entering the car.

Ferrari’s unparalleled quality standards and increasing focus on client service underpin the extended seven-year maintenance programme offered with the Purosangue. Available across the entire range, the latter covers all regular maintenance for the first seven years of the car’s life. This scheduled maintenance programme for Ferraris is an exclusive service that allows clients the certainty that their car is being kept at peak performance and safety over the years. This very special service is also available to owners of pre-owned Ferraris.

Regular maintenance (at intervals of either 20,000 km or once a year with no mileage restrictions), original spares and meticulous checks by staff trained directly at the Ferrari Training Centre in Maranello using the most modern diagnostic tools are just some of the advantages of the Genuine Maintenance Programme. The service is available on all markets worldwide and from all Dealerships on the Official Dealership Network.

I can not wait to drive the Purosangue and experience that glorious V12 engine once more!