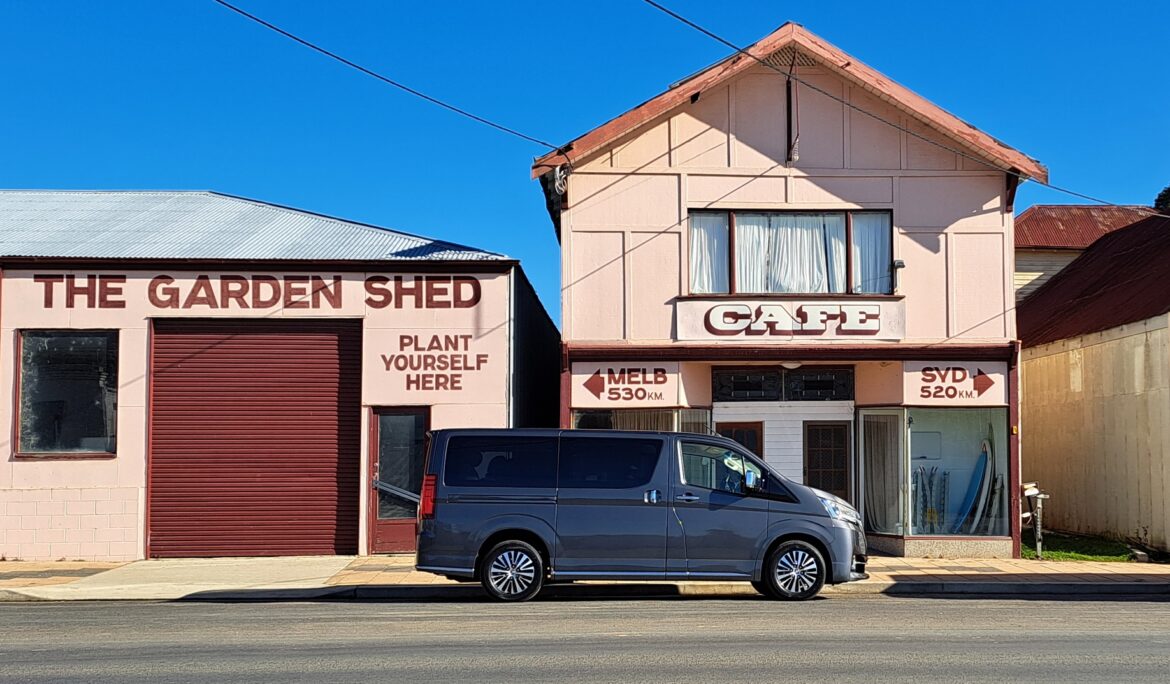 Is there anything more exciting than a big family road trip!? Planning pit stops, packing snacks and favourite toys for the younger passengers, it’s just a wonderful time. This particularly road trip was more than 12 months in the making, with similar preparations made back in 2021 only to have COVID-19 lockdowns cancel it the night before we were meant to leave! This year we decided to take my elderly mother as well, so our car of choice was of even greater importance.

Cabin space, comfort, storage room were all essential considerations and the vehicle that ticked all of these boxes was the Toyota Granvia VX in the six-seater configuration. Our road trip took us from Sydney to Sale via the scenic route along the Monaro Highway and Cann River Road. On the way home we took the Princess Highway back up the NSW coastline and spent a night in beautiful Merimbula.

Once the Granvia was chosen, the next big decision was who would sit in what seat. Hubby was the primary designated driver, with my son taking the passenger seat for most of the time. This was so I could sit in the back and ensure everyone was having a pleasant journey and as my daughter wanted to sit in the second row next to Grandma, I was relegated to the third row.

The Granvia was ideal for our road trip for many reasons, but in particular because each of the four Captain’s chairs have a foot rest that can be raised and my mum needed to have her feet elevated due to her health conditions. Mum had no complaints at the end of our four-day adventure and our children enjoyed having her come along for the ride, spotting moving rocks (sheep in the boulder country around Cooma) and collecting real rocks from the different landscapes that we drove through.

Rear passengers want for nothing in the Granvia VX six-seater as each seat is heated with power recline and footrest adjustments controlled via buttons on the inside of the arm rest and manual forward/back movement. There is also enough room in the cabin for each seat to be manoeuvred without disturbing the other passengers. Between the two second row seats there is a flip up table, which has four shallow cup holders that do not hold water bottles well but thankfully there are plenty of other drink holders located within easy reach. One thing my daughter did complain about was the height of the seatbelt couldn’t be adjusted and it pinched her on the neck.

There are 15 cup/drink holders in total throughout the cabin and although you may not use them all for drinks, you will use them for phones, tissues, masks and whatever else you find yourself needing to have within easy reach. There are also plenty of USB-C charging ports for every rear passenger to access with two located on each C-Pillar and two at the rear of the centre console.

The Granvia has a smart rear view mirror that projects the rear-view camera in the mirror and so I could look out of the front windscreen without blocking the driver’s rear view, making it even more pleasant for me. My complaints were from when I sat in the front seats because they are not heated and there is only single zone climate control at the front.

The large windows meant I did not feel stuffy sitting back there and there are air vents above each of the rear seats that can be moved or closed off, along with a speaker and a moveable light. The rear passengers have separate climate controls, which are located on the roof above the driver’s side second row passenger and these can also be adjusted from the front of the vehicle as well if needed.

The sliding rear doors have powered open/close with controls on the doors, on the key fob and buttons in the front of the cabin. If you have younger children, you can also lock the power doors so they can’t be opened by the rear passengers. With the second-row seat moved forward there was plenty of room for me to step into the third row and move around in the cabin. To exit there is a lever on the back of the second-row seat so I could move it forward and get out.

Each of the four Captain’s chairs have ISOFIX or rear tether restraint points and it is worth noting that the rear tether point is located down low at the base of the chair. The rear windows do not open, but they each have a manual blind to protect the eyes of the youngest passengers.

Front seat passengers also have many cup/drink storage options and cubbies to store things. At the front of the centre console on the floor there is a space large enough to store your hand bag and located here is one USB port and one 12V outlet, with second 12V outlet located next to the square cup holders in the dash. There is a large cubby under the arm rest, but this is not cooled like in other Toyotas.

The gloss black material around the 8″ colour touchscreen display attracts dust, so you will be regularly wiping it over. The Granvia has satellite navigation with SUNA live traffic alerts, Apple CarPlay and Android Auto, which had no issues throughout our trip. Other media sources include AM/FM radio, DAB+, USB, Bluetooth and Miracast. Voice control is activated by pressing the button on the steering wheel with the masculine looking silhouette on it and worked well for entering a destination, changing the radio station and making phone calls.

The large tailgate has power assisted lift, but is still heavy and you have to give it a big heave on the handle to close it down. The size also means you don’t have time to catch items that have moved and fall out when you open it and you have to remember to leave a large space behind the vehicle to raise the tailgate up. We had enough boot space for all of our luggage and one bag was secured in the vacant third row seat.

After covering just under 2,000km my husband said the Granvia was very pleasant to drive. The only thing he pointed out was the lane keep assistance was a bit aggressive when it applied the brakes. ANCAP tests of the autonomous emergency braking system showed GOOD performance at highway speeds with collisions avoided or mitigated in most scenarios. ANCAP tests of the lane support system functionality showed some GOOD performance, however the system does not intervene in more critical emergency lane keeping scenarios and overall performance was classified as ADEQUATE.

Overall, the ANCAP score for Safety Assist on the Granvia is 79% with the other Toyota Safety Sense features on the Granvia models including Pre-Collision Safety system with pedestrian and daytime cyclist detection, Road Sign Assist (speed signs only), Automatic High Beam and High-Speed Active Cruise Control. You also get Blind Spot Monitoring, Rear Cross Traffic Alert and the VX I drove had the 360o panoramic rear-view camera with front and rear sensors, something I appreciated driving a van as large as the Granvia and conveniently you can engage the front view camera by pressing a button on the centre console.

The Granvia is powered by a 2.8 litre diesel engine with 130kW of power and 450Nm of torque and the engine is paired with a 6-speed automatic transmission and rear-wheel drive. The official combined fuel consumption is 8.0L/100km and for our road trip we used 10.0L/100km.

All new Toyota vehicles come with a five year/unlimited kilometre warranty and if a defect covered by the Toyota Warranty Advantage causes your vehicle to be undriveable, towing to the nearest Toyota Dealer and a loan car is covered. The service schedule for the Granvia VX is every 6 months or 10,000km, which ever occurs first and the first six services are capped at $260 each.

The Granvia VX six-seater proved itself admirably on our road trip as a pleasurable vehicle to spend a long time in thanks to the practical space on offer for every passenger. Priced from $76,650 plus on road costs and as tested with Graphite Premium paint ($675) the Granvia we took on our interstate road trip was $77,325 plus on-roads. Visit your preferred Toyota dealer for more information.