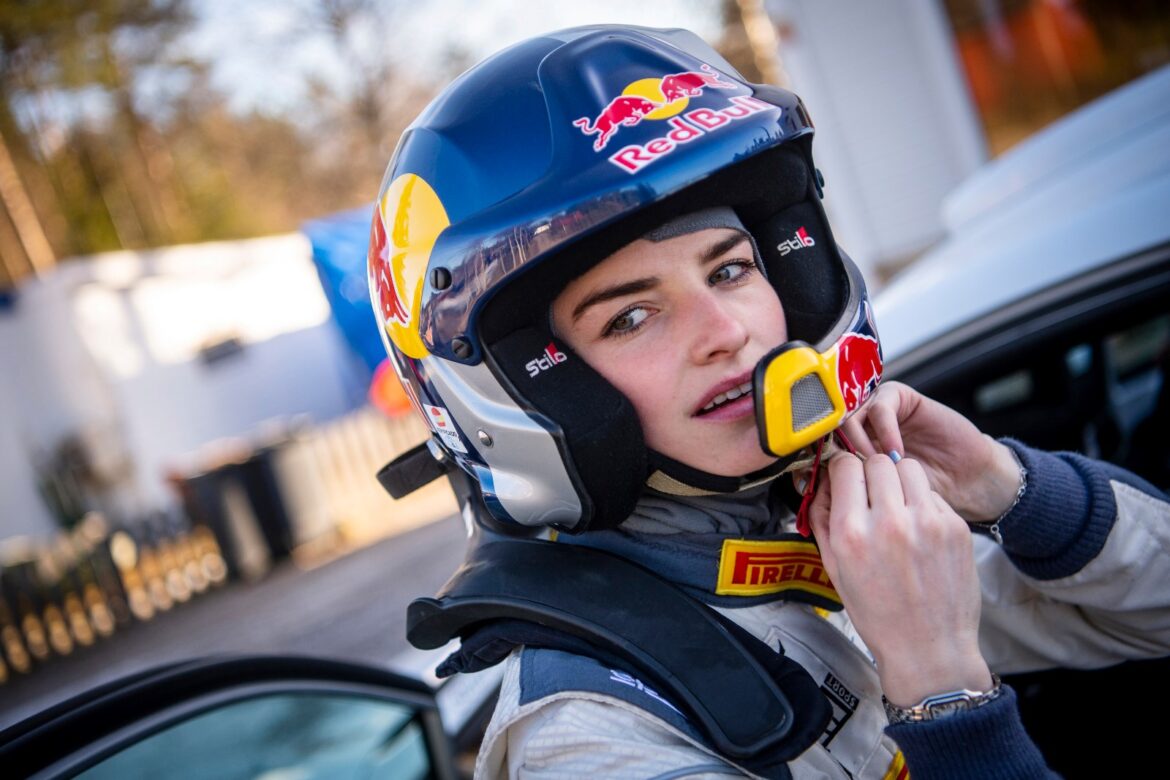 With the revving of engines in the background at last weekend’s Goodwood Festival of Speed, rally driver Catie Munnings took some time out of her busy schedule to chat with Driven Women Magazine.

Catie has grown up with the smell of dirt from the fields of the United Kingdom in her nostrils thanks to her family’s motorsport entertainment company. From the age of five Catie would sit in the passenger seat with her dad, who was a rally instructor, where she was “blown away by the speed” and that adrenaline buzz has never left her.

After school adventures involved rallying whatever was parked in the field, from quad bikes to old cars, with Catie mastering a handbrake turn by the age of 13. It is no surprise then that Catie went straight into rally driving without any karting experience and was competing in the European Rally Championship at the age of 17.

Here with the ongoing issue of finding the budget to compete in a series with limited television coverage, Catie not only gathered knowledge from her teammates, but even their old tyres. “My teammate would take off his tyres after a stage and these would go on my car as new tyres,” said Catie when she talked about the challenges she faced in the early days of her career.

After winning the 2016 European Rally Ladies Championship at just 18 years old Catie moved from there to the World Rally Championship in 2020. And in 2021 Catie signed with Andretti United Extreme E team for the first season of the all-new Extreme E Championship.

It’s here that Catie experienced the highlight of her career to date when, after coming off a bad race in Africa, Catie and her teammate Timmy Hansen won the Extreme E Artic rally in Greenland. “Jumping in the glacial waters of a Greenland river at the end of the race, still in our race suits, is a memory that will last forever,” said Catie. The Genesys Andretti United team went on to achieve third overall in the inaugural Extreme E championship.

In addition to it’s remote locations like Greenland, the Saudi Arabian desert or a Senegal beach, the other unique aspect of Extreme E racing is that each team must consist of a male and a female racing driver with the race results determined by their combined times.

“It’s really cool having men and women racing on an even playing field with everyone getting the same seat time because it is in the team’s interest to do so,” said Catie. Over her time driving in Extreme E Catie has seen the improvements this experience has given the women competing in the championship.

At only 24, Catie is one of the younger drivers competing in Extreme E and this has meant she is competing against some of heroes from the rallying world and even some of her dad’s heroes! So having the opportunity to compare her stage times against them and even match them is something very special for Catie.

From Goodwood, Catie was heading to Sweden to compete in the World Rallycross event this weekend and in her latest Instagram post dressed in her Red Bull emblazoned race suit Catie declared she was “Ready to race!” From there it is then on to Sardinia to compete in the double header round of the Extreme E and later on some Baja rallying in Spain, so a busy summer ahead for Catie indeed.

“It’s super Inspiring to connect with like-minded people through Driven Women Magazine, and I want to wish everyone best of luck in the motorsport world and say ‘keep pushing’ as there are great changes happening at the moment, with more exposure and opportunities for all,” concluded Catie.

In addition to her motorsport career Catie is also a columnist for TopGear magazine, with her regular piece called Car Control with Catie. This is something that I love to see considering the limited number of women who contribute to this and other motoring magazines around the world.

To find out more about Catie Munnings, please head to her athlete page on Redbull.com