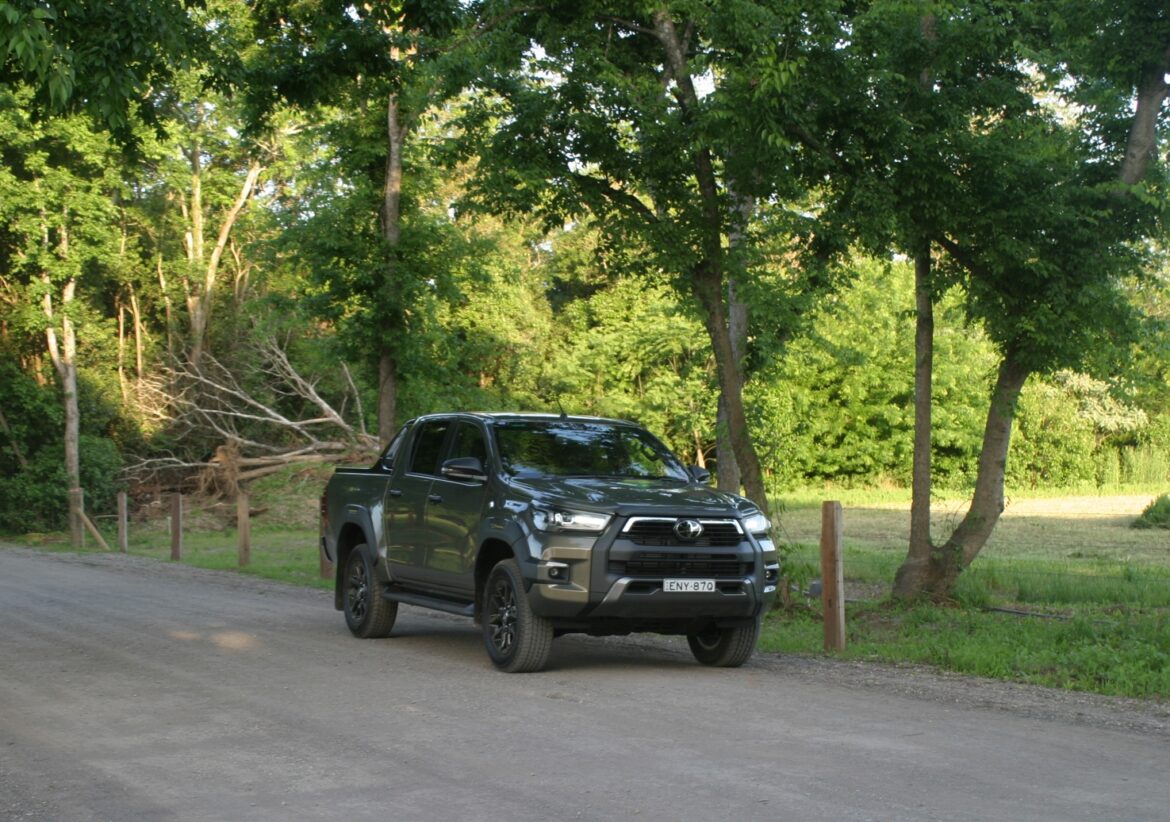 The Toyota HiLux Rogue has the most premium interior available in the current HiLux range combined with 18” alloy wheels with chunky wheel arches and a resin sailplane sports bar for a muscular exterior look. This particular HiLux has the premium paint colour called Oxide Bronze and is a pre-August update model, so is slightly less equipped than the HiLux that is now available.

The Rogue comes in a pick-up body style only and looks big because it is, at over 5.3 metres in length and 1.845 metres tall. Something I noticed while driving on the highway was the HiLux suffered from wind buffeting even when the wind was not strong and there was noticeable wind noise in the cabin, which was annoying.

The 2.8litre turbo diesel engine has 150kW @ 3000-3400rpm and 500Nm @ 1600-2800rpm and the Rogue is only available with the 6-speed automatic transmission. The official combined fuel consumption for the automatic is 8.4L/100km and for my week I used 8.6L/100km. This extra torque and towing technology mean 4×4 HiLux variants have a 3.5 tonne braked towing capacity with the Rogue coming standard with a tow bar, tow ball and tongue, and a 7-pin flat trailer wiring harness, so you are ready to hitch up your trailer, boat or caravan.

Another standard feature of the Rogue is the tub is lined with marine grade carpet and it has a motorised roller cover with anti-jam, remote locking and bright LED lights. There is one 12V outlet on the passenger side of the tray towards the back and there are only two tie down points, also located at the rear of the tray. The carpet is well fitted and there is foam under it on the base, which fills in the contours of the tray, making it comfortable to sit on the tailgate of the ute when it is folded down.

The controls for the roller cover are located on each side of the tray and you can start and stop the cover opening using these. The payload is 819kg, so you can carry plenty of hay for your animals and it is relatively easy to vacuum out once you are finished.  The lockable cover also means that you can securely carry a pram in the tray and your shopping will not get wet so you won’t need to put it on the back seat. It did rain the week I had the Rogue and as far as I could tell the cover did not leak.

To get you off-road the HiLux 4x4s feature rear diff lock, low range 4WD, Downhill Assist Control and a full-size spare tyre located under the rear of the ute. All models also come with a heavy-duty suspension and underbody package as well, but they also still have a leaf spring rigid axle. So the on-road ride is still jiggly and truck like and I also found the steering was heavy making it difficult for me to parallel park the HiLux.

The cabin may have leather accented seats, carpet floor covering with carpet mats, but the rest of the interior is covered with hard plastics. Both front seats are heated and this works very well and the driver’s seat has 8-way power adjustment with controls for recline, forward/back and seat cushion height front and rear. The passenger seat has only manual adjustment for recline and forward/back only.

Storage options in the HiLux cabin are plentiful with upper and lower gloveboxes and cup holders located on the dash, which double as another storage cubby by sliding the cup holder out, as well as two rigid holders at the front of the centre console. The drink bottle storage in the front door cubbies is a good size and there is a slot large enough for a small laptop or tablet.  For the storage of your mobile phone there is deep ledge at the front of the centre console with two 12V outlets and one USB port above this cubby. Under the arm rest there is one 220V, 3-pronged, 100W plug as well.

There is plenty of technology that comes standard across the entire HiLux model range including an 8″ colour touchscreen display with AM/FM tuner and Apple CarPlay/Android Auto. The Rogue also gets the smart entry and start system, but I found that it didn’t work that well. I needed to be very close to the vehicle and even then, on more than one occasion I had to remove the key from my handbag and press the button close to the ute to open it.

The Rogue also has a premium JBL audio system with nine speakers, DAB+ digital radio and satellite navigation. Other media sources include USB, Bluetooth and Miracast. The voice control system works well for making phone calls, changing the audio selection and setting a destination on the sat nav. The voice control button on the steering wheel does have a masculine silhouette though, something common across many other car companies.

The rear seats have ample head and leg room for two adults and I think even three adults could fit across the back seats at a squeeze. If not in use the centre seat can be folded down as an arm rest with two rigid cup holders at the front of it. The rear seats can even be completely flipped up and secured in place so that taller items can be carried here and there are storage cubbies under the rear seat.

For younger children there are two ISOFIX/three rear tether child seat restraint points, but like many other utes this is a little difficult to use. The problem with many utes is there is only one central rear tether point and car seats fitted on the outer seats need to have the rear tether strap passed through one loop and then attached to the central point. If three car seats were fitted then it may be difficult to attach these to the one tether point due to its size. The one plus I did note in the HiLux was that Toyota have clearly labelled the central tether point to help avoid confusion.

I liked that the mat in the rear foot well went completely across the carpet, which would help protect it from wear and mud. Rear passengers get two central air vents with manual direction, speed and on/off controls. For storage there are good sized cubbies in the rear doors for drink bottles and there are hooks on the back of the front seats that can hold up to 4kg.

Toyota Safety Sense comes as standard across the HiLux range and includes Lane Departure Alert, Pre-Collision Safety system with pedestrian and daytime cyclist detection, Road Sign Assist (speed signs only) and Active Cruise Control (high-speed). The cruise control is activated by using a stalk behind the steering wheel. ANCAP tests of the autonomous emergency braking system showed GOOD performance at highway speeds with collisions avoided or mitigated in most test scenarios. Tests of the lane support system functionality showed some GOOD performance; however, the system does not intervene in more critical emergency lane keeping scenarios and overall performance was classified as ADEQUATE. Overall, the Safety Assist systems on the HiLux have an ANCAP score of 78%.

All new Toyotas sold come with a five years/unlimited kilometre warranty and Toyota will increase this under the Warranty Advantage Extended Engine and Driveline coverage to seven years, provided your vehicle is properly serviced and maintained per its Warranty and Service Book. The HiLux service interval is every 10,000kms or six months, whichever occurs first and for the first six services the price is capped at $250 for each.

As tested the Hilux Rogue I drove (March production vehicle) including premium paint was $69,665 plus on-road costs. But as previously mentioned from August 2021 there were some tech upgrades and the price with premium paint is now $70,875 plus on-road costs. For many Toyota vehicles global demand currently exceeds supply so delivery will take longer than usual so contact your preferred Toyota Dealer for more details.