Getting down and dirty in the Aston Martin DBX 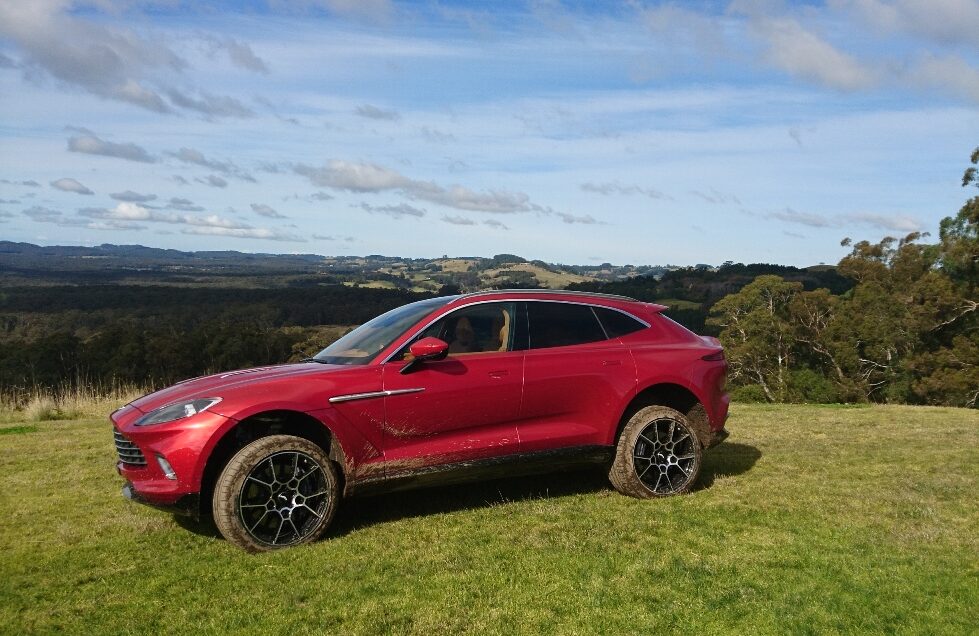 Released in November 2019, the Aston Martin DBX luxury SUV was a truly landmark moment for this world-famous manufacturer. Built in Aston Martin’s purpose-built manufacturing facility in St Athan, Wales, on the foundation of a new dedicated SUV platform, the DBX is seen as the model that will bring more female buyers to this luxury brand.

Weighing in at 2,245kg and being over five metres long this is not your standard sports car spec. But combined with the powerful 4-litre, twin-turbocharged V8 engine found in DB11 and Vantage, the DBX features an impressive output of 405kW and 700NM of torque, carefully tuned to meet the specific needs of this model. This provides sports car performance figures and propels the all-wheel drive DBX from 0 to 100km/h in 4.5 seconds and on to a top speed of 291km/h.

But this wasn’t what I came to try out at this particular event; here we were testing the DBX off-road. And I don’t mean just on a gravel driveway, I am talking proper mud being flicked up the sides of these SUVs that cost the best part of $500k!

Before we headed off in our DBX convoy we were instructed to engage Terrain Mode 2, which raised the ride height and that was all the prep the SUVs had. Wearing the standard Pirelli P Zeros on the 22-inch rims the DBX drove relatively effortlessly through the slippery muddy stuff. I could feel the tyres moving around under me and then finding the grip again and I was far more nervous than the DBX; I can assure you as off-road driving is not my preferred surface. But we made it to the top of the very steep hill and back down again with nothing more than some muddy wheels to show for it.

This was quite an impressive statement made by the DBX, which has been very deliberately created with instant familiarity and ease of use from the start. The luxuriously handcrafted interior of DBX has been designed to provide equal space and comfort whether sitting in the front or rear of the car. Approximately 250 person-hours goes into the manufacture of each DBX and sitting in the three cars we had the pleasure to drive I can see why.

The seats are trimmed in sumptuous, full grain leather that smells beautiful and in an industry first, both the headlining and electric roof blind are available in a luxurious Alcantara finish, providing a harmonious design, light obscuration and solar attenuation without compromising headroom. As part of ‘Q by Aston Martin’ – Aston Martin’s personalisation service – optional features of this centre console can be machined from a solid piece of wood, such as Walnut, for added tactility.

Small touches throughout, including separate central armrests, glovebox design and the ergonomic positioning of the car’s key control systems, have been guided carefully by the input of the brand’s Female Advisory Board, dealership feedback and a variety of private focus groups held worldwide. Not limited to this area, the guidance provided has been key to the success of DBX’s overall design.

Complementing the incredibly high standard specification of DBX, which includes all available active safety systems, there are many optional accessory packages offered. These packages will tailor the car even further to customers’ needs, sports or pastimes. For example, the Pet package will include, amongst other things, a portable washer to help attend to the needs of a muddy dog after a walk. Alternatively, the Snow package will deliver boot warmers to make a ski trip just that little bit more pleasurable.

The DBX is intended to expand the sales reach of Aston Martin worldwide with the largest markets being in China and the USA. In Australia, for the April 2021 year to date sales 20 out of their 52 vehicles sold were DBXs and the overall sales figure represents 85.7% growth for Aston Martin over the 2020 sales figures.

Today Aston Martin’s global average for sales breakdown is around 92% male and 8% female. In 2018 when I first heard Marek Reichman, Aston Martin’s Chief Creative Officer talk about the DBX he stated the key target market for this SUV was ‘Charlotte’. Aston Martin disclosed that for the DBX it’s more like 85% male and 15% female. Still the strongest market for Aston Martin for sales to women is China, where the ratio moves towards 60:40. That’s not just in DBX, but that’s also across our other projects in DBS and DB11 too.

“So yes, it’s [the DBX] made an impact and continued to skew interest towards our other models with the female buyer too. Again, it’s down to the greater understanding of the customer as typically in the past 100 years we’ve skewed towards the male consumer, but now over the last 5-6 years we now have an opinion that comes from the female client,” said Marek.

For me the Aston Martin certainly ticks the luxury SUV boxes and off-road at least I can say it performs adequately. I am still yet to drive a DBX on-road so I will have more to say about that at a later time once I have the opportunity to do this. The Aston Martin DBX is priced from AUD $357,000 (plus on road costs) in Australia and as tested the cars driven here ranged from $427,370 to $480,494 plus on-road costs for the Morning Frost White DBX (pictured above) that I drove. Visit your preferred Aston Martin dealer for more information on the DBX and the entire Aston Martin range..