Defender of the Realm 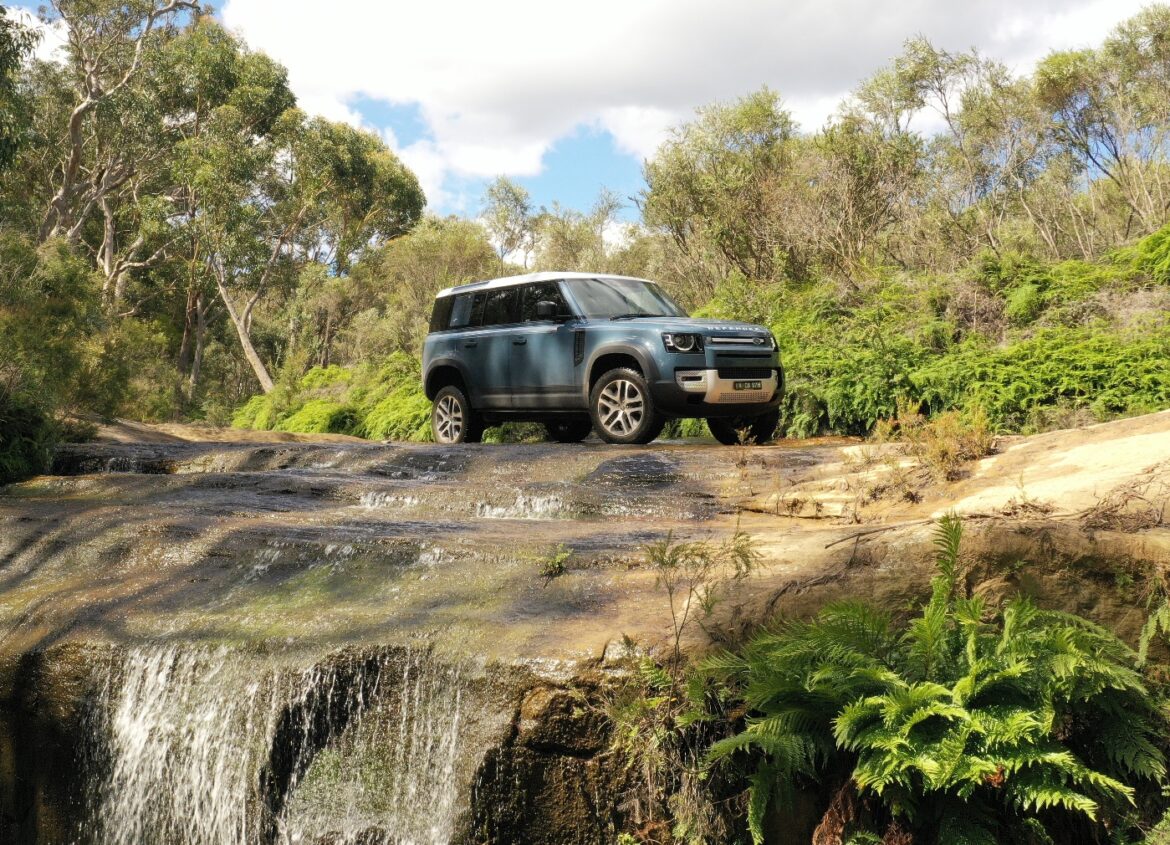 With its imposing proportions, broad shoulders and pensive looks the all-new Land Rover Defender would cut a striking figure as a sentry parked in your driveway. But it is also a landmark vehicle for Land Rover as well, in more ways than one.

Many people were saddened when the previous model of the Land Rover Defender ceased production 2016 and much fanfare was heralded before the release of the new Defender. Land Rover couldn’t afford to mess it up and there must have been a great relief at their Coventry HQ when the new model rolled of the production line in Slovakia to considerable hype from the world’s motoring media.

I have to admit though that I am not a Defender fan-girl and as with other vehicles that have received this amount of hype, I approached my drive of the Land Rover Defender with some reservations. I wanted to find out if its ruggedness diminished the everyday driving experience that most of the Defenders sold will likely be exposed to.

The short answer is ‘no’. The Defender is a comfortable SUV fitted with all the features you would expect to have in a $100k plus vehicle. The long answer is this is somewhat of a shame because it is most likely the majority of the Defenders purchased will be subjected no greater a rock crawl than driving over a speed bump and this would be like equipping a soldier for battle and confining them to barracks.

Because for me the greatest surprise of the Defender was how at ease it felt off-road. I admit that I am a novice off-roader at best and the tracks I drove along would be scoffed at by serious off-road enthusiasts, but this did not make the experience any less rewarding for me. Being able to simply select the correct drive mode, point the Defender toward the rough stuff and just have to steer it was an exhilarating experience that I will not soon forget.

Back on the less rough, but still corrugated dirt tracks the Defender road over the bumps nicely and the driving experience in the cabin was pleasant. There was also very little noise penetrating the cabin from stones flicking up under the Defender and this equated to a quiet cabin on normal bitumen roads as well. It was here that I noticed the SUV was a bit wallowy through the corners, but not nearly as bad as I thought it would be considering how high off the ground the Defender is. Although you can adjust the vehicle height thanks to the electronic air suspension using the controls on the dash, even in the lowest position my daughter found it difficult to step up into the Defender and needed to use the handle on the B-pillar to help her.

I drove the Defender 110 P400 SE variant, which is a higher rank vehicle among the Defender model line-up. Keeping with the Land Rover custom there are also many optional extras to choose from, so if you want to explore them further I suggest you head over to our Go Configure page and select ‘Land Rover’ to configure your perfect Defender.

The P400 is powered by a 3.0 litre turbocharged in-line six cylinder petrol engine that produces 294kW and 550Nm of torque and this is paired with an 8-speed automatic transmission. The engine provides decent acceleration for an all-wheel drive SUV that weighs from 2,361kg, with the official 0-100km/h time being 6.1 seconds and a top speed of 191km/h. The official combined fuel economy is 9.9L/100km and for my week adventuring in the Defender I used 14.2L/100km.

Demonstrating how keen the Defender is to get off-road you have just two on-road driving modes Eco and Comfort, but six off-road modes including Grass/Gravel, Mud Ruts, Sand, Rock Crawl, Wade and Configurable. Under the Configurable setting you can adjust Differentials (Automatic, Centre Slip Limited, Centre and Rear Limited), Powertrain (Relaxed, Normal, Responsive), Steering (Light, Medium, Heavy) and Traction Control (Less Wheel Spin, Off-road, More Wheel Spin) to suit your individual situation. You also have wade sensing to show the depth of the water you are driving through, the maximum of which the Defender can handle is 900mm.

My Defender was fitted with the optional Towing Pack ($3,702), which includes All Terrain Progress Control, Terrain Response 2, Configurable Terrain Response, Tow Hitch Receiver and Advanced Tow Assist. The towing capacity for the Defender is up to 3,500kg with a maximum tow ball weight of 350kg. If you do plan to use the Defender for towing you will also like that there is a towing view under the rear view camera options to make it easier to connect your trailer up.

The tough-looking characteristics of the Defender extend into the cabin with hard plastic on the floors covered by carpet mats in the case of my Defender, exposed screws, neoprene-like fabric on the centre console, doors and dash and seats covered with Ebony Grained Leather and a robust woven textile. But to show that there is a fun side to this big brute Land Rover fitted very cute-looking puddle lights on the Defender.

The front seats in my Defender had the optional power adjustment for recline, forward/back, height and 4-way lumbar support with three memory positions and heating ($806). There are a lot of storage options within the cabin with a deep hard plastic cubby under the arm rest, a ledge for you sunglasses in front of the arm rest and two large cup holders. Under the cup holders and towards the front of the centre console there is a large open space with a grippy rubber mat in the base and it is here you have one USB C port, a nano sim card slot, one USB port and one 12V outlet. Storage options don’t finish there though with another ledge in front of the passenger on the dash, behind the neoprene covered handle, that is rubber-lined with a 12V outlet here too. I did find it annoying though that I had to lay my drink bottle down in the door cubby storage area, making it hard to reach and increasing the risk of spills.

I wasn’t keen on the overall design of the leather wrapped steering wheel, particularly the hard plastic in white. But I did like that the voice control button featured a feminine-looking silhouette, which is rare as most car companies use a masculine-looking silhouette. On the downside, the voice control did not work well for me when I was trying to set a destination on the sat nav.

The 10-inch central touchscreen provides access to all the usual infotainment options such as sat nav, Apple CarPlay, Android Auto and media including a DAB radio, in addition to some other cool features. I particularly liked the 3D surround camera with 360o sensors that allowed you to virtually walk around the Defender or select an off-road view mode that shows the front wheels so you can see obstacles.

I also like that I could control the second row climate settings from the front and lock my children out from changing them. Because there is a bit of a design flaw in the Defender climate control system with the speed control for the second row seats also controlling the air speed for front seat passengers. This really annoyed me because my children insist on having the air speed at hurricane force while I prefer a gentle zephyr! You can also control the third row air speed and lock it to prevent adjustment.

The second row seats in the Defender I drove were the optional 60:40 load through version with manual slide and recline, centre arm rest and heating and cooling ($2,067). The cooling did not work well, but the heating was good according to my children. The central arm rest has two rigid and shallow drink holders in it and there is also drink bottle storage in the door cubbies.

The second row has central air vents and vents under the front seats and as my Defender was fitted with the optional three-zone climate control ($2,405) the rear passengers had digital temperature control, digital speed control and manual mode control. Below the climate controls there are two USB ports and two 12V outlets and in the back of the front seats there is also a mount point and USB port for the connection of a smart device. My children do not get to use devices in any car and they really liked the windows in the roof above the second and third row passengers.

The second row has ample head and leg room for adults if the seats are fully back, but if space is needed for third row passengers then the leg room is significantly reduced making the second row uncomfortable for adults. There are only two ISOFIX/two rear tether child seat restraint points in the second row and for ease of cleaning there is one carpet mat over the hard plastic floor.

But if you have passengers that must sit in the third row they can at least have heated seats ($3,393 option). There is drink bottle storage on both sides and 12V outlets next to the window with an elastic strap to hold a smart phone in place. There are air vents in the C-pillars and individual air speed control and rubber mats on the floor.

Also if the third row seats are in place there is no room in the boot of the Defender, but with the seats placed flat there is enough space for a pram and the weekly shop or your camping tent and supplies. The height was right for me and I found it easy to reach into the boot, but if needed there are controls in the boot to lower and raise the SUV. There are four tie down points and one 12V outlet along with a rubber mat that covers the hard plastic on the back of the third row seats. The plastic mat also had an additional flap of plastic that I am calling the dog flap as you lower it over the edge of the boot so that the paint is not scratched when your dog jumps in or when you lift your mountain bike in. The side opening boot door is also a plus and there are cubbies within the door for more storage options.

The all-new Land Rover Defender has a 5-star ANCAP safety rating (2020) with an Adult Occupant Protection score of 32.51 out of 38 (85%) and a Child Occupant Protection score of 43.22 out of 49 (88%). Dual frontal, side chest-protecting for the first row and side head-protecting (curtain) airbags for both the first, second and optional third row are standard across all variants.

There were quite a few exterior optional extras fitted to the Defender I drove as well starting with the Tasman Blue metallic paint ($1,950), white contrast roof ($2,000), 20-inch wheels in style 5095 ($1,560), wheel arch protection ($1,215) and the somewhat pointless chequer body protection kit ($940), which is actually made from plastic.

The starting price of the all-new Land Rover Defender 110 P400 SE is $102,736 excluding on-road costs and as tested this Defender was $126,917 plus on-roads or should that be off-roads? Because if you buy a Defender and only ever use it in the urban jungle, you will be doing yourself and the Defender a disservice. Visit your preferred Land Rover retailer for more information about this strong, yet gentle SUV.