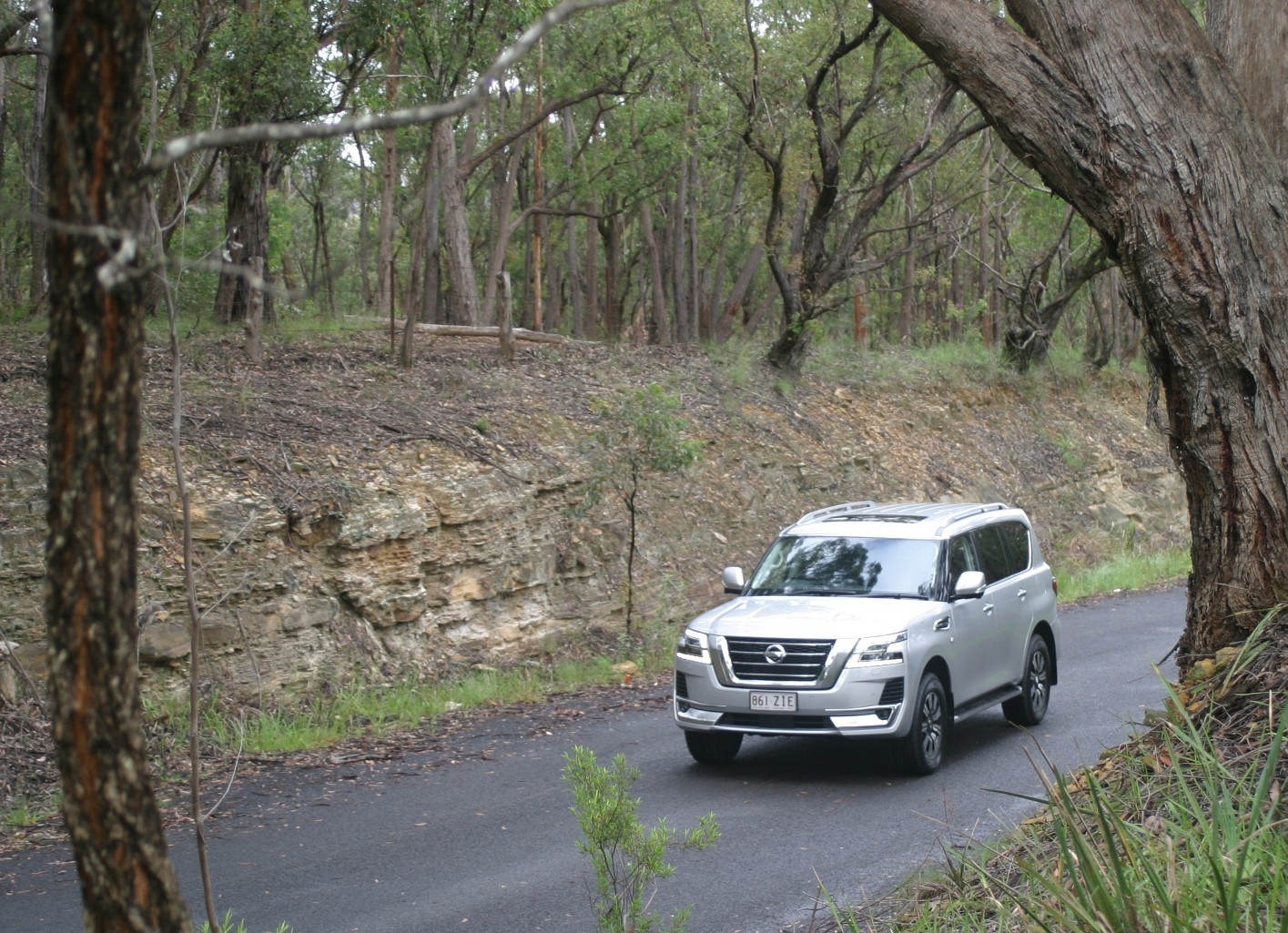 There are SUVs and there are four-wheel drives, the Nissan Patrol is the later. But gone are the days of dodgy heaters, vinyl seats and manual gearboxes; four-wheel drive owners can now do their adventuring in comfort and style.

The Nissan Patrol is looks big and it is big, it’s longer and wider than a Land Cruiser LC200, but just a smidge shorter. My son commented that the Patrol was so big that he could easily live in it. He would have the bedroom in the third row, lounge room in the second row and kitchen in the front. The Patrol is high off the ground and I needed to use the running boards in order to step up into it. If you were lifting small children in and out of the Patrol this is something you would need to consider.

The ride is a bit jiggly in the Patrol, but it maybe feels a bit more comfortable than the Land Cruiser I drove, but I would want to drive them back to back in order to properly ascertain this. The 5.6L V8 Direct Injection petrol engine in the Patrol has enough power to pull the heavy 4WD along at a decent rate. The engine delivers 298kW of power and 560Nm of torque, which is more power than the LC200, but less torque. The official combined fuel consumption is 14.4L/100km and for my week I averaged close to that at 15.6L/100km.

The Patrol has a 3,500kg towing capacity with a braked trailer and 750kg for un-braked trailers. The 7 speed automatic transmission has Intelligent 4X4 with electronic 4WD selection with three off-road modes, sand, snow and rock, but for my week with the Patrol I kept to the black stuff so didn’t try this out.

The cabin of the in the Ti-L Patrol I drove had a classy look about it thanks to the wood trim and ruched leather.  The leather accented front seats are heated and cooled and the cooling is good, something that not all vehicles can boast. The driver’s side seat has 8-way power adjustment including height adjustment and lumbar support with two memory positions. While the front passenger seat has 6-way power adjustment with no lumbar adjustment or memory positions. There is reasonably good vision out of rear view mirror even with the third row seats up. But the one feature that brings the classy vibe down in the cabin is the annoying foot brake.

The width of the Patrol means the centre console is wide and under the arm rest there is a large cool box that could fit 4-6 600ml drink bottles. You can turn the cooling on and off with a button inside the cool box and when it is on you can’t hear it running when the lid is down. The lid is also a good feature as it can be opened by both the front and second row seat passengers, so if children are sitting in the back they can get their own drink bottles out.

The 8” touch screen includes satellite navigation and displays the 360o view rear view camera with reversing guidelines and front and rear parking sensors. Your media sources for front passengers include USB, iPOD, Bluetooth, AM/FM radio and disc, but the Patrol does not have Apple CarPlay or Android Auto. In addition to the touchscreen you can access the features of the infotainment system via the voice recognition system, which works well.

The Ti-L also comes with 8” entertainment screens that are in the back of the front seat headrests for second row passengers to view. Parents will be happy to know that you can turn these on and off from the front and you can mute them for when you need to communicate with your children. Another handy feature is the rear climate can be altered from the front, which is particularly good if you have younger children in the second row.

The rear screens come with earphones, a remote control and each screen has individual volume control and can select input mode for their screen. The input modes include front DVD, rear USB or rear HDMI. There are also two additional USB ports and a 12V outlet and passengers get climate control with fan speed, temperature and mode adjustment with vents in the roof and under the front seats.

The second row of seats have plenty of head and leg room for two adults, maybe three if the person sitting in the middle is slender. If you are only using the two outer seats the centre seat folds down with two drink bottle holders and there is also a good drink bottle storage space in the door cubby. There are two ISOFIX points and three rear tether child seat restraint points in the second row, but the tether point is low down behind the seat, which is annoying. The width of the rear seat is such that you could put three cars seats across the second row with careful selection of the seats you purchase. But this would mean you would not be able to access the third row easily because you need the completely fold up one seat to do this.

The folding second row seat is a good feature because it makes it easy to get into the third row. But these seats are not big enough for adults to fit in and there is only one rear tether point here, which is located on the right hand side. There is drink bottle storage in the top of the wheel arches and vents in the roof. The third row seats are manually raised and lowered if they are not being used permanently.

With the third row in position the boot is still a decent size and would accommodate five schools bags and with the third row folded down the boot is huge and would easily carry a pram and the weekly shop. The boot has a power tailgate, four tie down points (six when seats are folded down) and one 12V outlet. There is also additional shallow storage under the boot floor and the full-size spare tyre is located under the rear of the patrol.

Driver safety aids on my Ti-L Patrol included Emergency Braking, Forward Collision Warning, Rear Cross Traffic Alert, Adaptive Cruise Control, Lane Departure Warning and Blind Spot Warning with warning and steering intervention. The Nissan Patrol features driver and passenger front and side impact airbags and curtain airbags along all three rows, but it does not have an ANCAP safety rating.

All new Nissan vehicles come with a 5-Year Unlimited Kilometre warranty and five years of 24-Hour Roadside Assistance and Capped Priced Servicing for the first six services according to your vehicle’s service schedule.

The Nissan Patrol Ti-L starts at $102,646 plus on road costs and my Patrol had a Tow Bar kit which costs $1,256 fitted and E-Brakes that cost $168.78 each excluding GST. The Nissan Patrol Ti-L proves 4WDriving doesn’t have to be an uncomfortable experience anymore for the driver and passengers, but like the Land Cruiser I have previously driven, it’s too big for urban areas and should be enjoyed in our beautiful great outdoors. Visit your preferred Nissan Dealer to explore the Patrol model range for yourself.