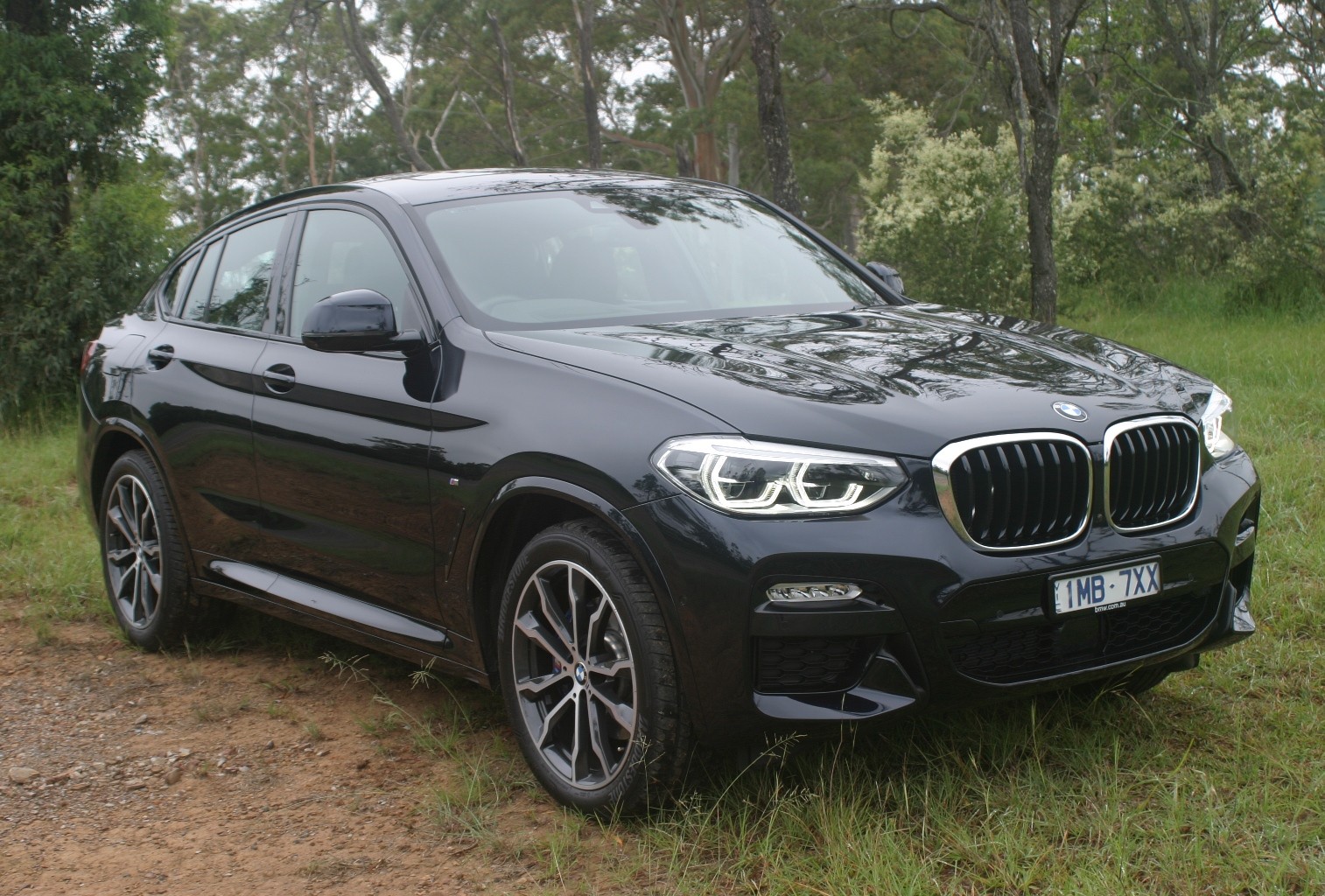 The standard SUV shape has not really changed since the segment started to infiltrate the mainstream car industry more than 20 years ago. For me the X4 coupé-esque sloping roofline on the BMW Sports Activity Coupé is a refreshing take on the SUV and offers a more stylish design that I have warmed to over the years.

This is the second generation X4 and brings the model well and truly into the digital age with intelligent driver assistance systems and innovative digital services that keep you connected to the modern world. This technology is combined with a sporty and elegant interior with luxurious materials like leather and fine wood trim.

There are six models in the X4 range with petrol and diesel engine options, including the recently announced BMW X4 M and the BMW X4 M Competition. The new six-cylinder in-line engine that generates 353 kW/480 hp from its 3.0-litre displacement, together with peak torque of 600 Nm (442 lb-ft) and an additional by 22 kW/30 hp for the Competition spec. The BMW X4 M will sprint from 0 to 100 km/h in 4.2 seconds, while the Competition variant will hit 100 km/h from rest in just 4.1 seconds.

The 20d has a 2.0-litre, four-cylinder diesel engine with twin-scroll turbocharger putting out 140kW of power and 400Nm of torque and can do 0-100km/h in 8.0 seconds. You would not know you were driving a diesel though as you can’t hear the engine on the inside of the X4.

The 30i has a 2.0-litre, four-Cylinder petrol engine also with twin-scroll turbocharger that generates 185kW of power and 350Nm of torque and can do 0-100km/h in a handy 6.3 seconds. I really could feel the difference in the acceleration between the X4s, the 30i was surprising spritely for a large SUV.

The 20d diesel engine is more efficient with an official fuel consumption of 5.8L/100km compared to the 30i petrol which is 7.8L/100km running on 95RON fuel. In real world driving this was a bit closer as I achieved 9.0L/100km with the diesel and 10.5L/100km with the petrol X4. If you do lift the bonnet to check out the engine in your X4 you will notice that it doesn’t have a dipstick. Engine oil level is checked via the on-board computer under the Vehicle Settings option.

The standard equipment list for both X4s I drove was similar and includes head up display, BMW Connected Drive, which features a three year subscription to BMW Online as a mobile internet portal and BMW Apps for integration of third party Apps including Spotify for smartphones and Real Time Traffic Information. You also get Remote Services that enables you to send addresses to your X4, pre-conditioning and locking/unlocking vehicle using a smartphone App.

The 30i comes standard with a 12.3 inch multi-functional instrument high-resolution colour display and my 20d also had it as part of the Innovations Package that also includes Comfort Access System, High-beam assistance, adaptive LED headlights and wireless phone charging for compatible devices ($2,200 option).

The instrument panel changes colour depending on what adaptive drive mode has been selected; blue for Eco pro, white for Comfort and red for Sport. On the 30i when you select Sport mode you get an additional choice of Standard or Plus and a ///M insignia on the dash. The feature I really liked on the instrument panel was the kilometres to go range readout at the bottom of the fuel gauge in addition to the standard fuel gauge layout.

The Eco-pro and Sport adaptive drive modes can be configured to personal preferences, while in Comfort drive mode you simply get a balanced setting in the X4. With Eco-pro there are options for adjusting how the X4 coasts and the amount of energy that the seat climate function, climate control and light and sound uses. In addition you can switch damping and steering between Sport and Comfort.

In Sport drive mode you can select between Standard, Plus (on 30i only) and Individual. Individual allows you to select between Comfort and Sport for damping, steering, engine and transmission. I spent most of my time in Sport mode as I didn’t feel that the suspension was too harsh, in fact the drive of both X4s was solid and comfortable.

I’m of the opinion that cars of the calibre of BMW should come with all the driver assistant features as standard across their model line-up. Disappointingly the 20d only had Pedestrian Alert, Collision Warning, Lane Departure Warning and Lane Change Warning (blind spot detection).

In addition to these the 30i gets the full house of safety features including Active Cruise Control with Stop&Go function, Cross traffic warning on the front, Steering & Lane Control Assistant and Lane Keeping Assistant with Side Collision Warning. Plus adaptive LED headlights with High-beam Assistant and BMW Selective Beam.

The set-up of these safety features can be accessed via the button with the green circle on it that is below that hazard light button on the dash. You can select to have all features On or Off or configured to how early or late you want them the activate. I felt that the lane change warning was not as assertive on the 20d, which may be something to do with how the technology is implemented on the diesel?

Overall though driving the X4 is a very pleasurable experience thanks to the sporty seats that hold you nicely in place. The seats are electronically adjustable with side bolster and lumbar support (a $600 option on the 20d and part of the Comfort Package on the 30i). The driver seat has two memory buttons, so once you find that sweet spot you can store it and it’s linked to your driver profile as well. A feature that I really liked was that the headrest could be adjusted both up and down and forward and back, which is good if you wear your hair in a ponytail.

I really liked the look and feel of the leather seats in both X4s; the 30i had black leather with contrast blue stitching and ///M colour piping highlights and the 20d had leather in Tacora Red with decorative stitching (a $2,500 option for the 20d). I liked the red leather, it contrasted nicely with the Sophisto Grey Brilliant Effect metallic paint ($1,950 option) and more importantly on the hot Sydney days we have been struggling through in the past month or so, they didn’t get as hot to touch compared to the black leather seats.

The 30i also had heated seats for winter, which is part of the optional Comfort Package that also has ambient lighting with 11 colour choices, lumbar support and an absolutely awesome Harman Kardon speaker system ($2,800 option).

The 10.25 inch touch display in the middle of the dash gives you access to the satellite navigation, audio options and communications. You can enter inputs into the system via the voice control system that works excellently or the iDrive Touch Controller, which allows the option to write the letters of your destination on the top of it.

There is a 20GB hard drive for storage of audio files, two USB ports one at the front of the centre console adjacent to the cup holders and wireless phone charger (under the slide up door in front of the gear selector) and a second port under the arm rest. The X4 now also comes with a DAB+ digital radio tuner and standard AM/FM radio if you are driving in an area without digital radio coverage.

You can also access the internet via the touchscreen that displays weather information for your current location, news with submenus for Australia, business, sport, world and culture. Online searching is limited and allows you locate things like fuel stations, hotels, restaurants, etc either at your current location or another location. There is also Wiki location, Yelp, My news and Flickr.

The safety cameras are very good on the X4 and integrate surround and panorama view with automated parking assistant and Active Park Distance Control. One feature that I have never seen before on any other car I have reviewed was the ability for the front and rear view cameras to look down when you approach an object. I discovered this feature by accident, I was sitting in the X4 in my driveway going through the many options you can customise on the SUV, and my dog walked in front of the car and the camera automatically faced down. This is an excellent feature and could potential save a child’s life because even with standard cameras there are still areas you can’t see directly in front or behind the car. Good job BMW!

Moving into the rear seats of the X4 and you appreciate the panoramic sunroof ($3,000 option on both X4s) as it really opens up the cabin. There are three rear tether/two ISOFIX child restraint points and plenty of leg room for adults. But the sloping roof would mean that people taller than about 180cm would hit their head on the roof. In my eagerness to get into the rear seat I hit my head on the door frame. Mental note to self, when you get into the X4 you need to duck your head further than you think.

Passengers get rear climate with temperature and air speed controls and one 12V outlet. The rear seats have a 40/20/40 folding mechanism giving you flexibility for the storage of cargo. Additionally you can fold down a centre arm rest and it has two drink holders.

Take a look at the rear of the X4 and you’ll notice no obvious boot release. You open the boot by pressing the BMW badge in so it has a clean design line across the back. The boot of the X4 is a good size and would accommodate a pram and the weekly shop. It has two hooks and four tie down points and a 12V outlet, but no spare tyre as the X4 is fitted with run flat tyres.

The BMW X4 doesn’t have an ANCAP safety rating (the X3 does and it’s 5-stars), but the Euro NCAP lists both the X3 and X4 under the same category and they both have a 5-star safety rating there. In addition to all of the intelligent safety features the X4 also has airbags for driver and front passenger, head and side airbags with seat occupancy detection for driver’s and passenger side and knee airbag for the driver.

I always ask my children what they like about every car that I review and for the X4 said they liked having their own climate control and the design of the button to open the drink holders in the rear arm rest. Then my daughter pointed to the steering wheel and said “I like that”. ‘That’ was the BMW emblem on the steering wheel. And if a comment like that by my six year daughter is not proof that car companies should be more thoughtful of children in their marketing campaigns, then I do not know what is!

The BMW X4 is at the Goldilocks height for a SUV, not too high and not too low and it has a solid, reassuring drive for passengers and sporty dynamics that keep the driver interested. Both X4s I drove had around 5,000km on the odometer and neither had any rattles.

Although the sloping back end looks good from the outside it does reduce head room and limits the view from the rear view mirror when child restraints are fitted. The only other thing that slightly let the X4 down was squeaky brakes on my 20d.

I felt the 30i was superior to the 20d from a performance and safety perspective and in this spec it was also the cheaper option so it’s the one I would take home, but why not visit your preferred BMW dealer to drive them for yourself.