The Land Rover Discovery Sport or Disco Sport for short, is the smallest SUV in the Land Rover model line-up. But compared to the SUVs made by other car companies it’s actually quite large. It has many interior design similarities with the Jaguars I have recently had the pleasure of driving and I would describe it as a Jag in outdoor gear. It’s a nice SUV to drive every day and one that you wouldn’t be afraid to take off the beaten track once in a while provided it was wearing the right boots.

If you do get down and dirty in your Disco Sport you’ll be happy to know that the wheels are very easy to wash, it’s just one motion with the sponge for each spoke. Also the doors go all the way past the sill so the amount of dust on the sills is reduced. 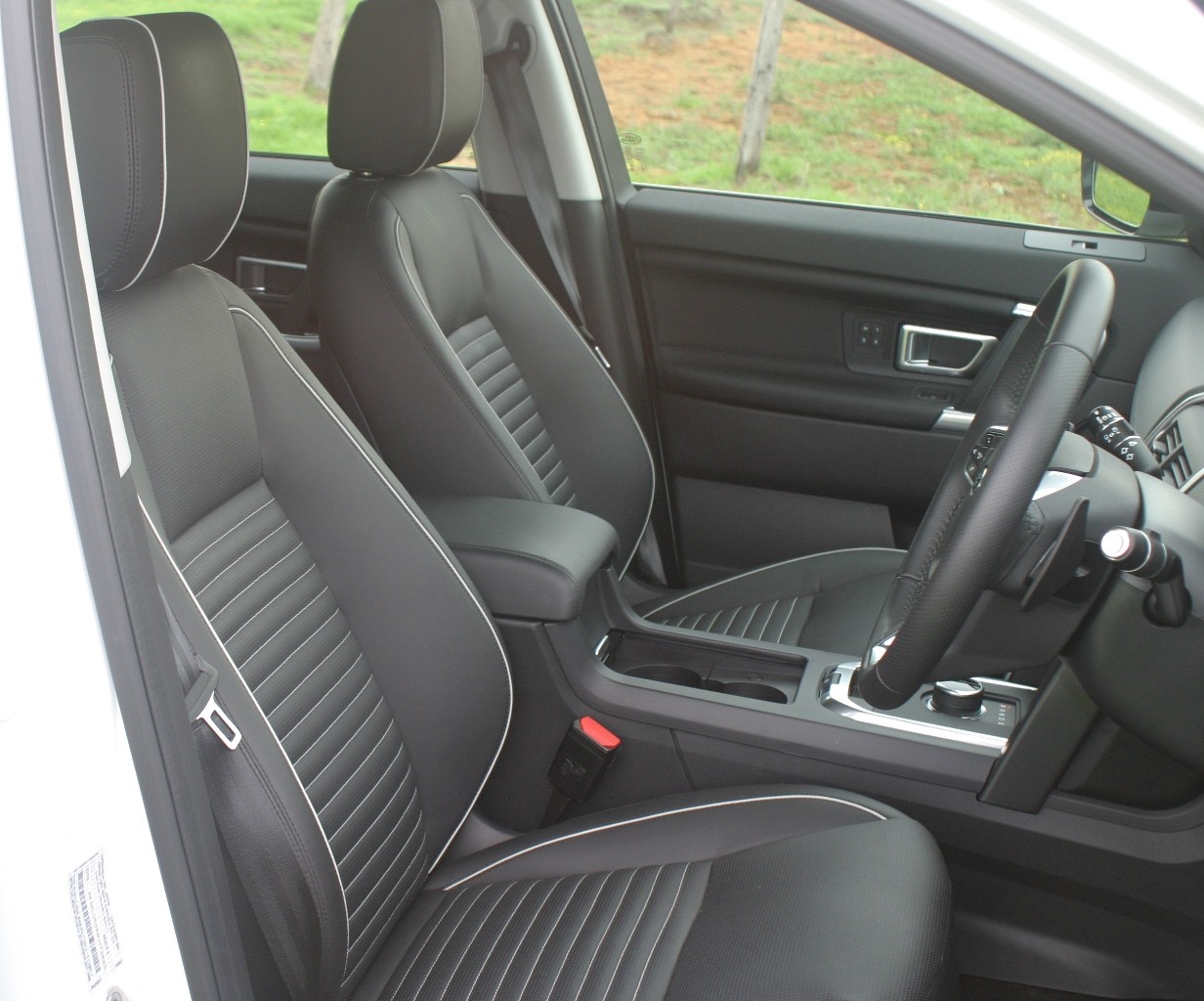 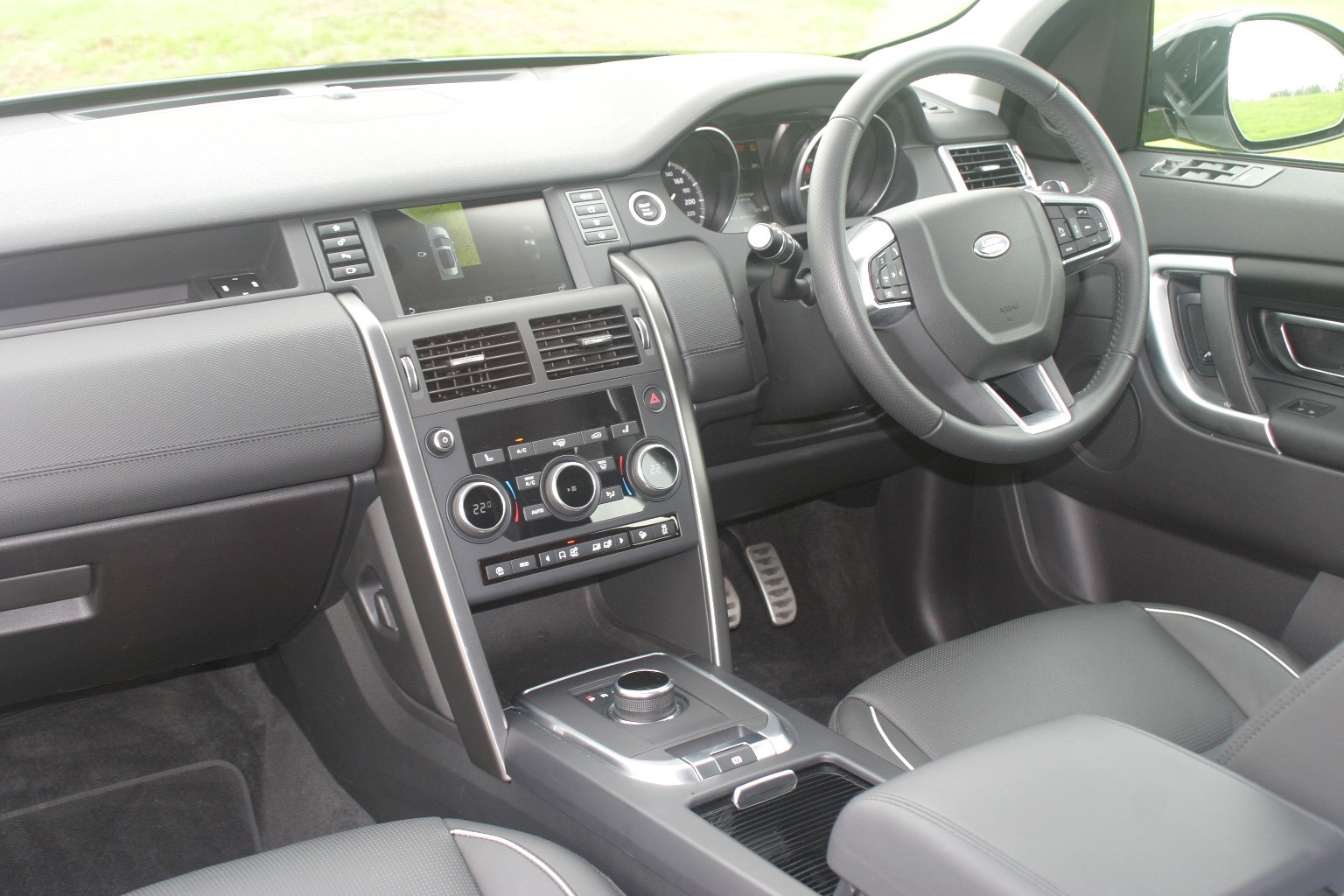 The plastics and leather are harder than those used in the Jags, but they are aging well because of this for a car that had 6,000km on the odometer when I drove it. Harder surfaces mean less likelihood of them being damaged with every day wear and tear that just can’t be avoided in a car. 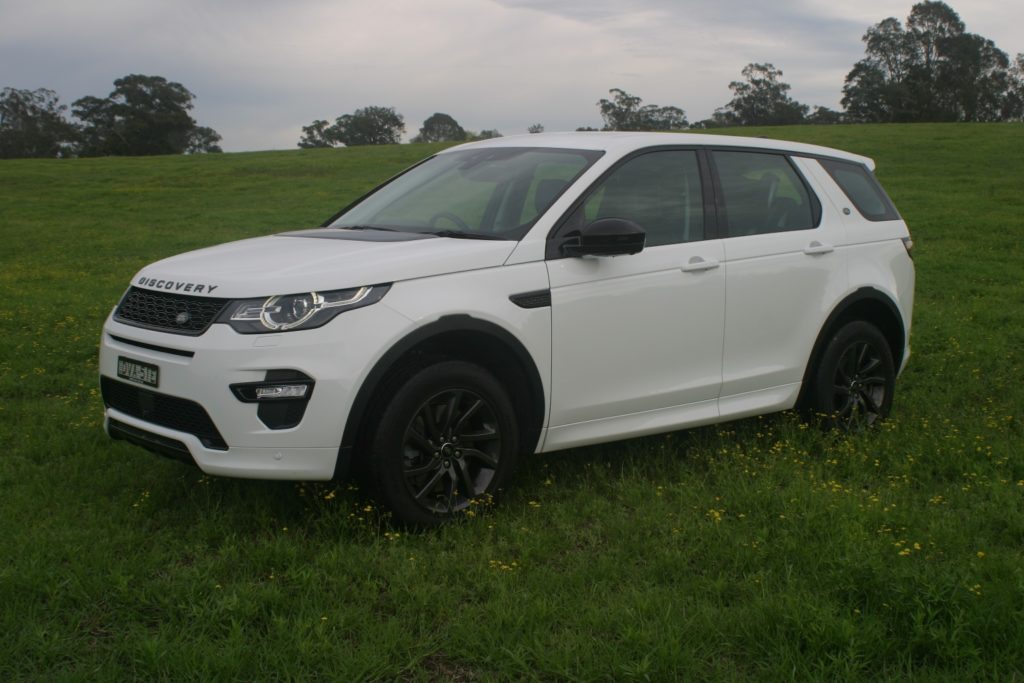 The SD4 HSE is the diesel variant of the middle of the range Discovery Sport that offers more features than the SE model, but less than the HSE Luxury model. It has a 2-litre twin turbo charged Ingenium diesel engine with maximum power of 177kW @ 4,000rpm and 500Nm of torque @ 1,500rpm. It offers enough power for easy overtaking and does 0-100km/h in 7.5 seconds with official fuel economy of 6.4L/100km while I achieved 9.0L/100km. For a diesel, there was not much engine noise in the cabin and only some road noise from the tyres.

Overall the Disco Sport drove well although on bumpy roads it did shake us around a bit. I also felt the 9-speed automatic gearbox sometimes was in too high a gear for slow speed driving and that the SUV was labouring to get up a hill. 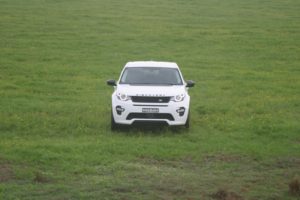 There are four terrain modes to choose from with Normal being for everyday driving where SUV automatically switches between 2WD and 4WD when needed. Grass/Gravel/Snow is for loose or slippery surfaces, Mud Ruts for muddy soft and uneven surfaces and Sand for soft surfaces like dry sand, deep gravel or deep snow.

I tried out the downhill assist for the first time in any SUV that I’ve driven and it worked well on the slippery grass I was traversing over. The Discovery Sport has rear and front view cameras and sensors, but in the long grass I was driving in the front sensors were going off all of the time, luckily they can be turned off if you don’t need them.

If you have a boat or caravan to tow to your favourite out of the way camping area the Discovery Sport can handle it with its 2,200kg towing capacity for braked trailers and Trailer Stability Control and Assist. 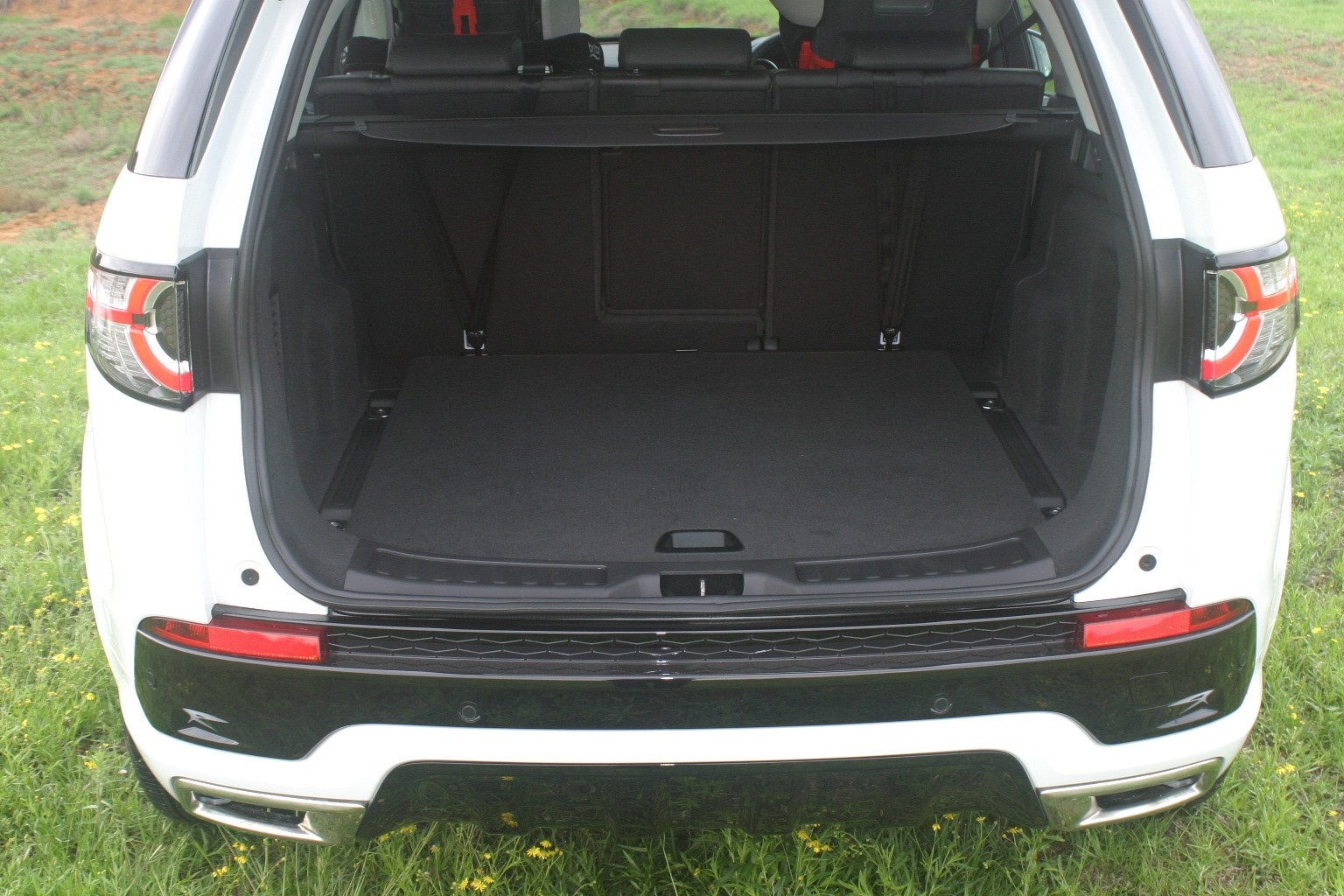 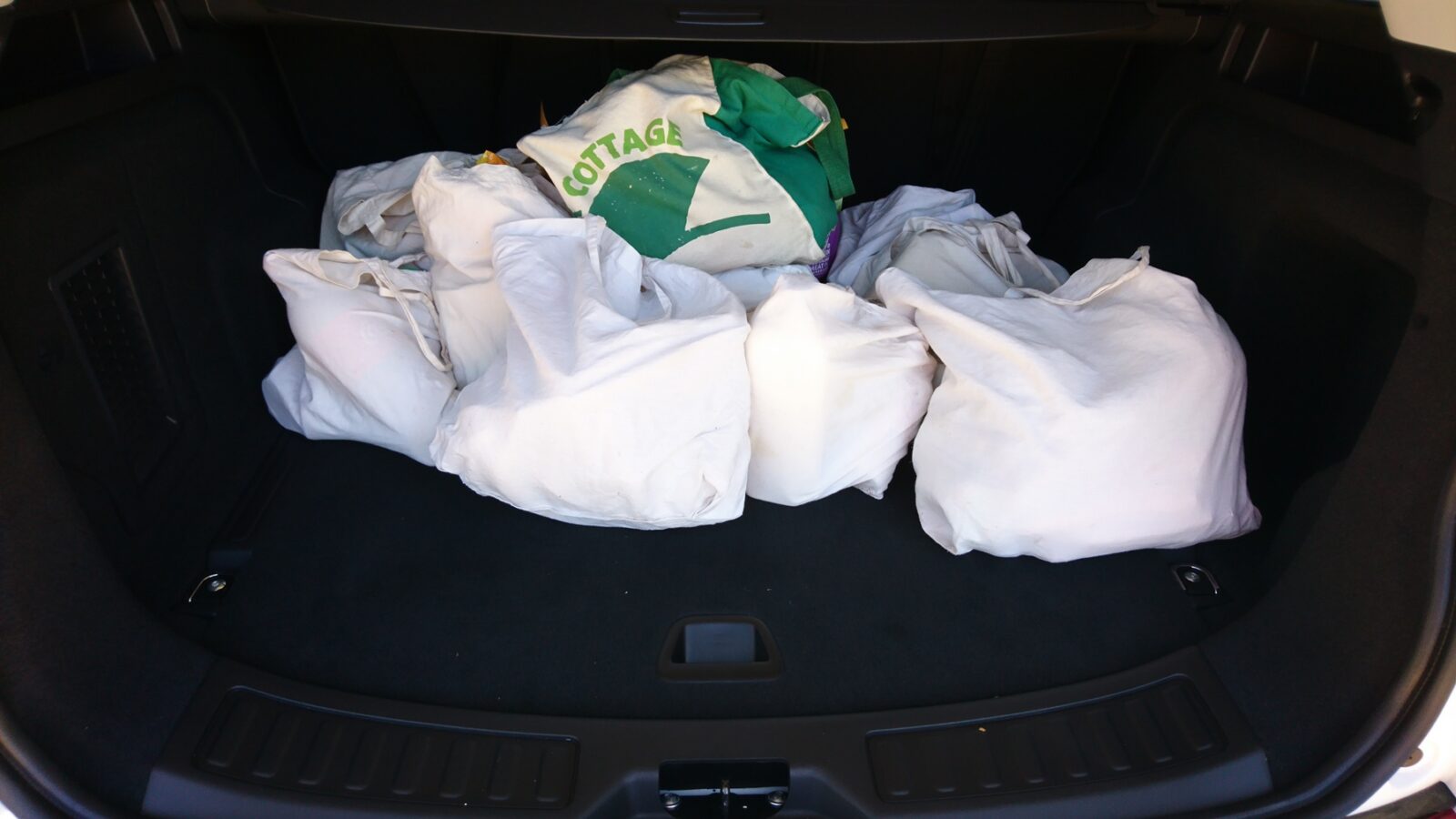 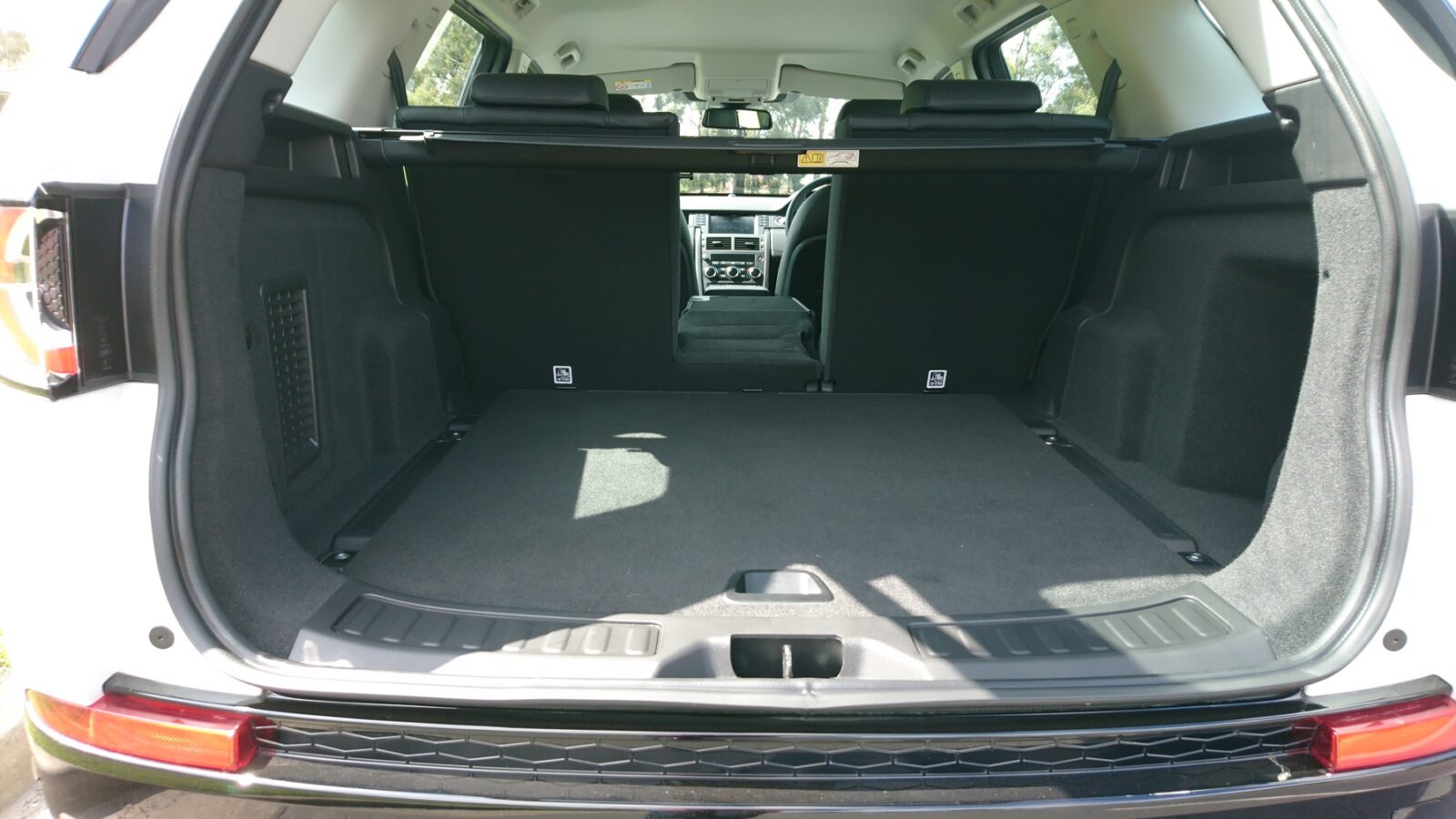 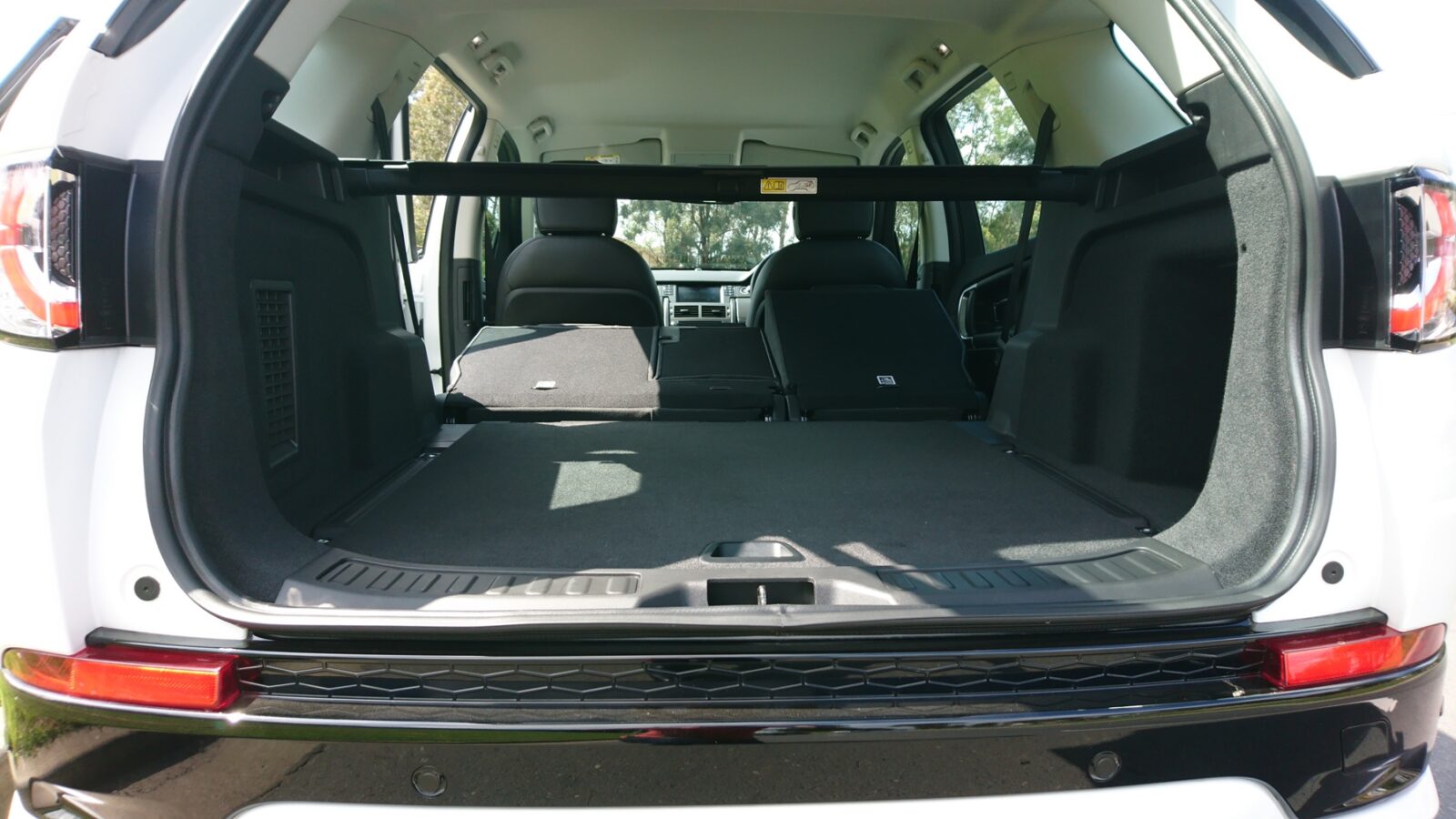 My Disco Sport was a five seat configuration model and it had a good sized boot (981 litres) that was plenty big enough for the pram and weekly shop combo and it had four tie-down points and a 12V outlet back there as well. If you opted for the seven seat version the boot would be tiny (officially just 194 litres) and would barely fit any shopping or gear in it at all. The rear seats have electric fold down and manual pull up for when you need to use the entire rear space for carrying large items (1,698 litres of space to be precise). Or centre seat can be folded down while two outer seats remain in place to stow longer items. There is a full size spare wheel. 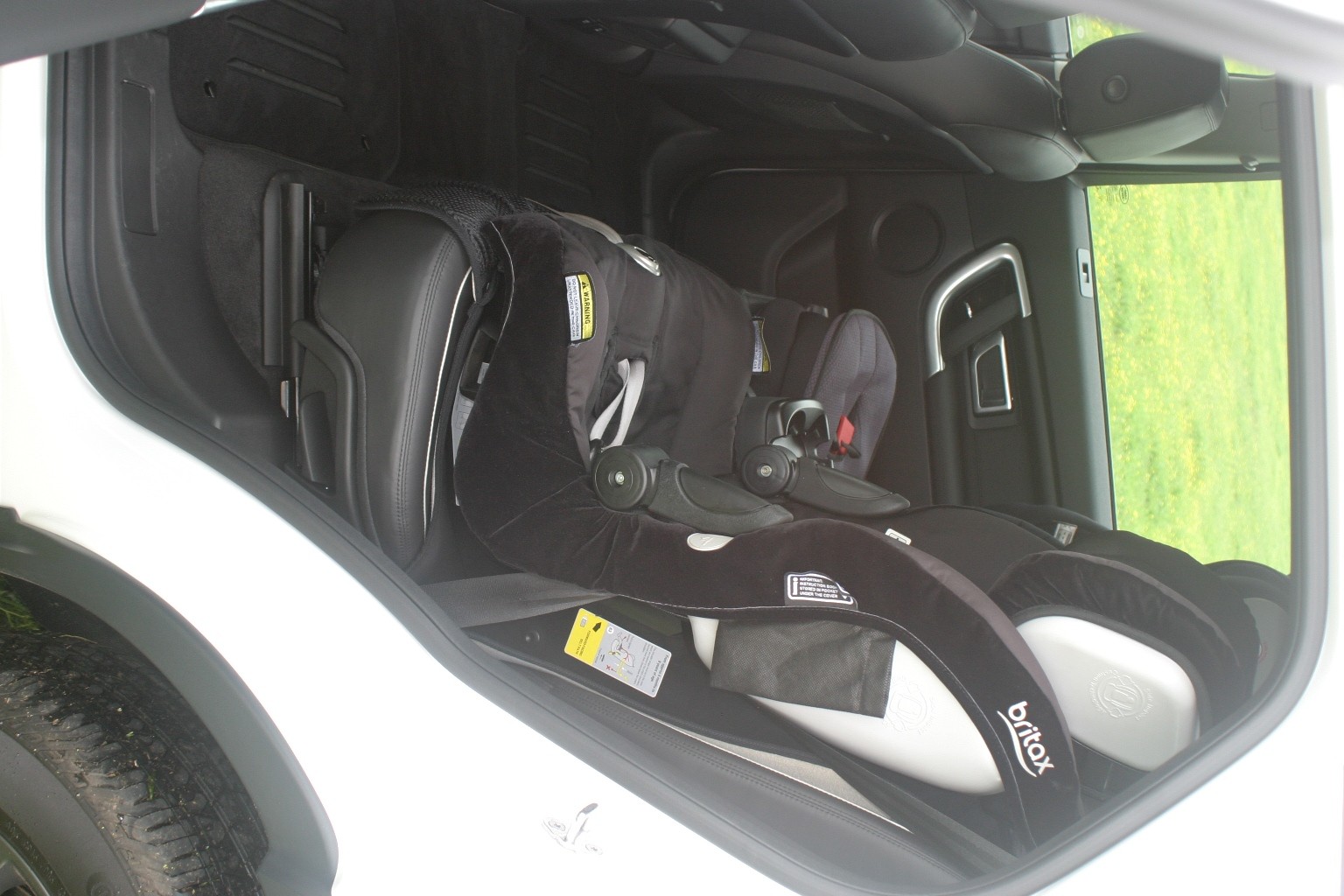 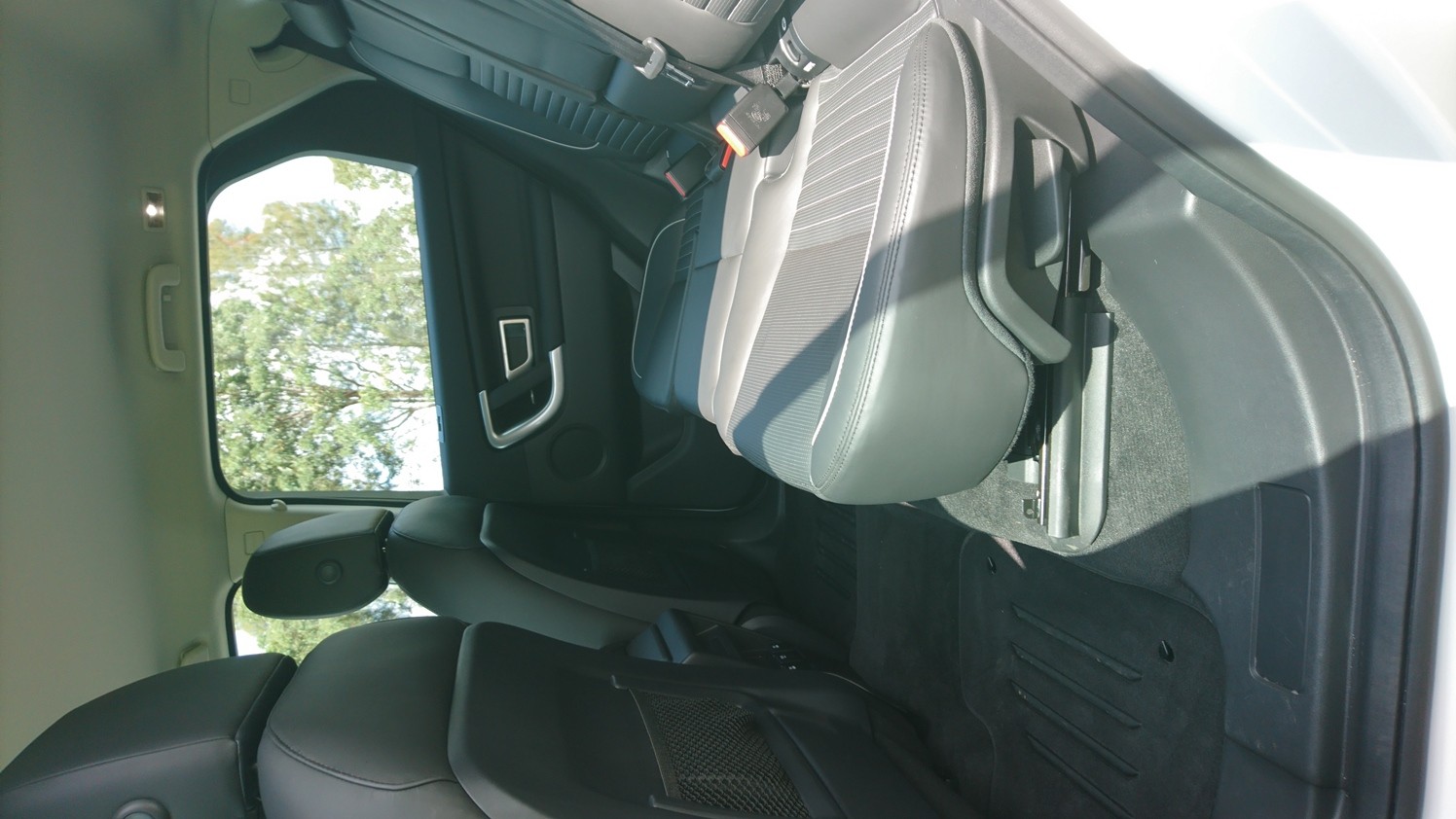 The window controls are in an odd position on top of the door sill and right toward the front of the door in the rear. It looks odd and for the children in the back it meant they couldn’t open their own window when they were in the restraint. But, maybe that is a good thing? 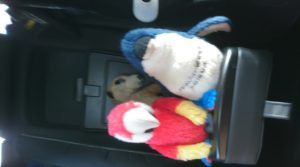 The centre seat in the rear folds down to reveal two drink holders and a small storage cubby for the children’s knick knacks, which is handy for all of the treasures my children bring into the car. There are two USB outlets and one 12V outlet in the base of the centre console and the air vents are only in the B-pillars and have air speed control.

The front seats have 12-way adjustability and are heated and cooled with three memory positions and come as standard. As mentioned the leather is not soft, but the upside being it feels to be hard wearing and you wouldn’t get too stressed if they got a bit of mud on them. 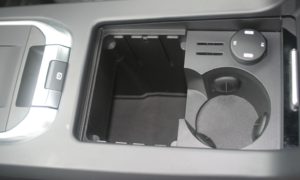 There are deep storage cubbies in the doors and the front passenger has a small ledge on the dash for a phone to rest on and there is a USB outlet adjacent to it. There is another USB outlet next to the cup holders and if you lift out the front cup holder you will find a secret storage area underneath. Under the arm rest was a 12V and AUX outlet. On the passenger side there is a hook for hanging your takeaway food bag on so that it doesn’t spill all over the passenger foot well on the way home from the restaurant.

The Discovery Sport HSE comes with the standard 8” touchscreen and the 10 speaker 380W Meridian sound system and Bluetooth connectivity. The voice control however only worked for media/radio and phone commands and not for sat nav commands making it difficult to enter sat nav directions when I was driving. It also comes standard with configurable ambient lighting, something which is usually an option on the Jaguars I have previously driven. 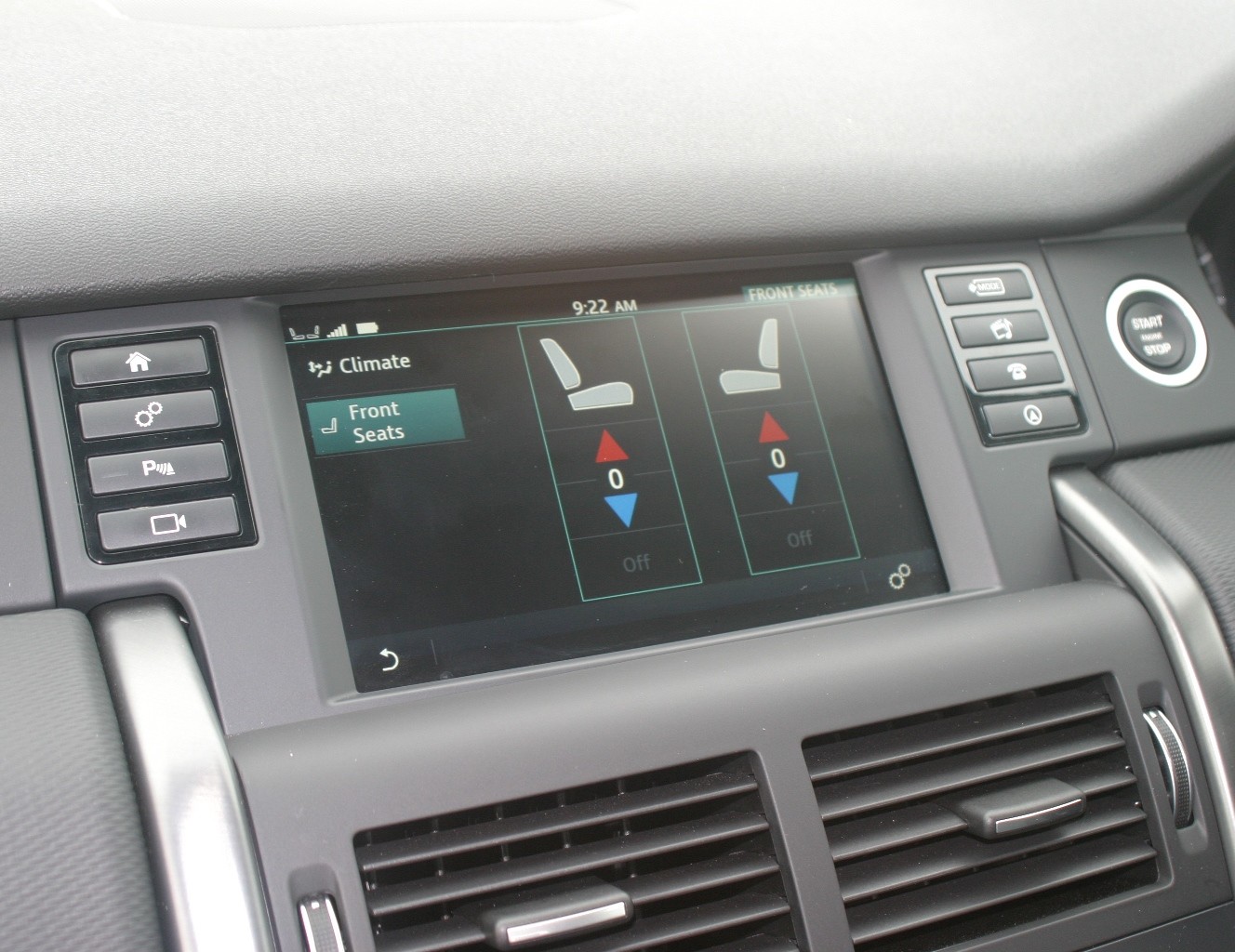 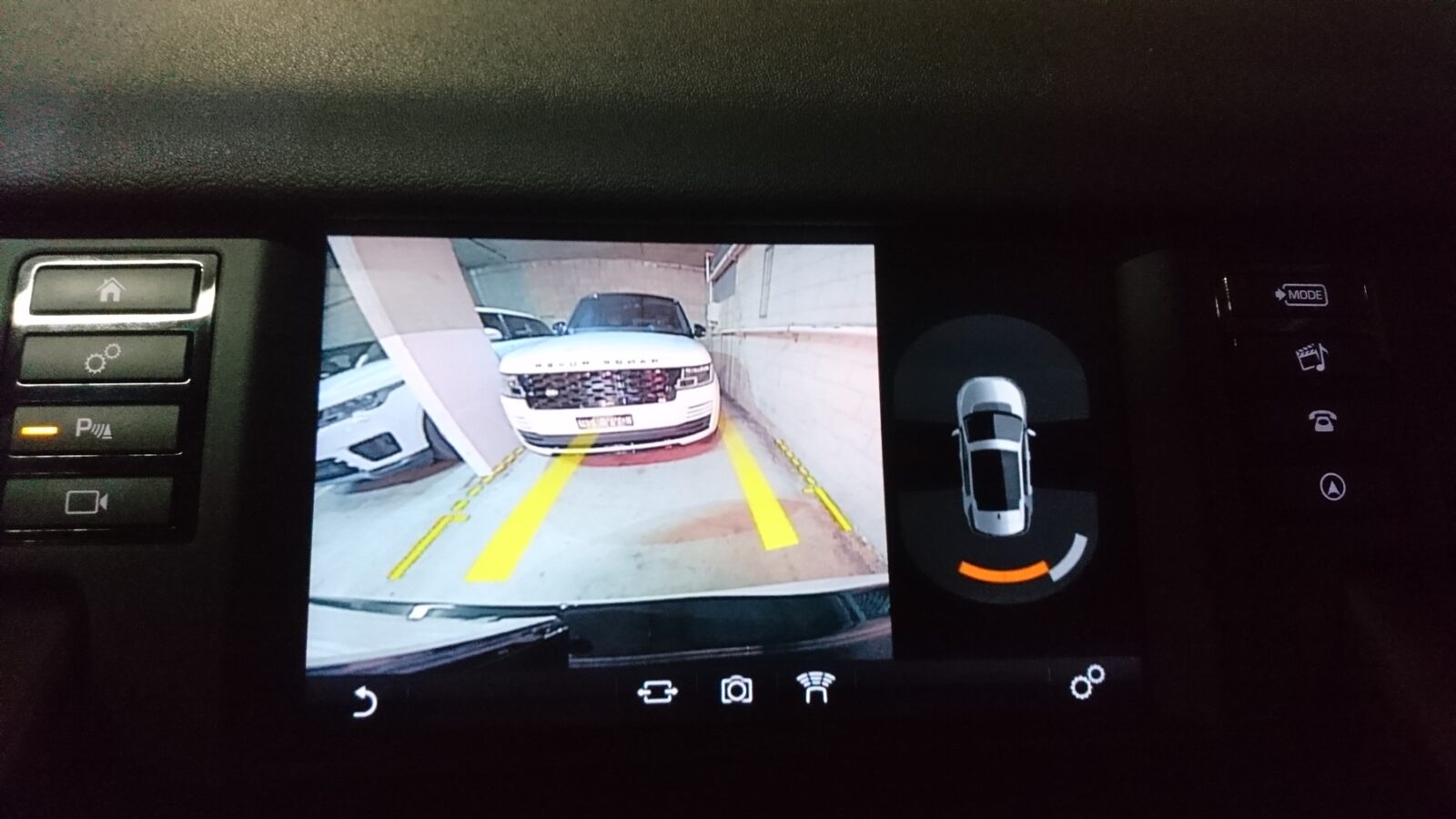 Standard active safety features on the 5-star ANCAP safety rated Disco Sport include autonomous emergency braking, lane departure warning, front and rear parking aids and rear view camera. My Disco Sport also had adaptive cruise control with queue assist and intelligent emergency braking ($1,440), blind spot monitor and reverse traffic detection ($1,210), lane keep assist with driver condition monitor ($960) and a surround camera system ($940). And if you were driving regularly in urban areas these are all must have features on a car.

The design is better looking than the Discovery at present in my eyes and although Land Rover describes the Discovery Sport as “distinctive silhouette and sculptured surfaces” I think my son described it better when he said “it was very square looking”. I explained to him that this was the traditional Land Rover shape and something you would just expect from their cars. 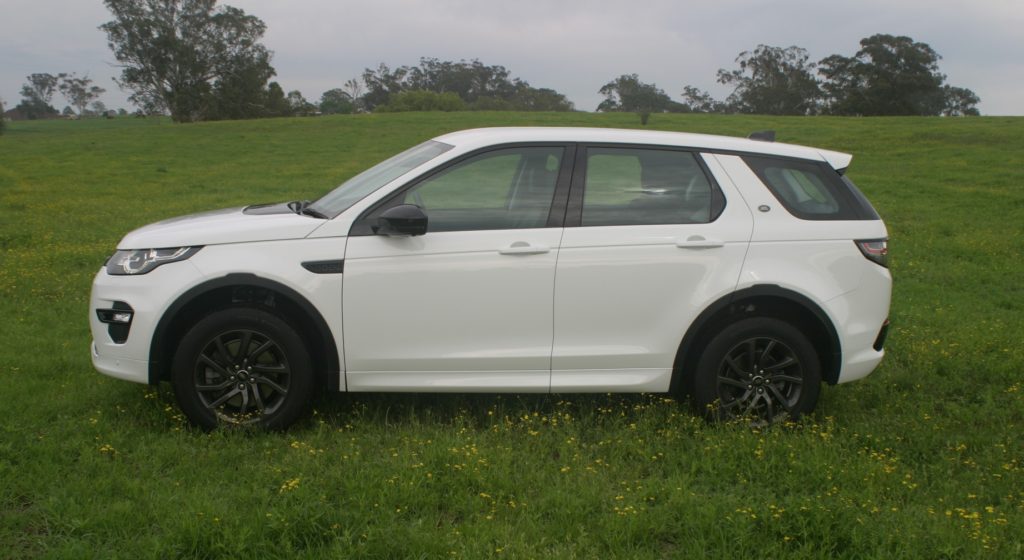