This Diamond can rough it

The Rolls-Royce Cullinan, the world’s most luxurious SUV is here and promises the new, younger and more adventurous customers of Rolls-Royce a SUV that would take them completely off the beaten track without the standard SUV compromises such as increased cabin noise or a lower, more featureless SUV that blends in and becomes just another car.

The Cullinan certainly isn’t just another car. It is named after the largest diamond ever discovered which now resides in the British Crown Jewels and it has been tested to destruction all over the planet. Rolls-Royce claims the Cullinan is an incredibly capable off-roader that sees the development of the ‘Magic Carpet Ride’ for off-road enjoyment, without sacrificing any Rolls-Royce on-road behaviour. 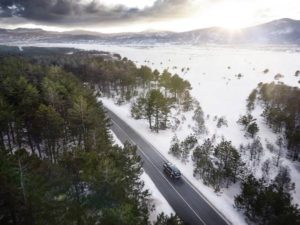 “The super-luxury lifestyle is evolving and Rolls-Royce is in the lead. Luxury is no longer an urban concept. More and more it is about embracing and experiencing the wider world. Our customers expect to go everywhere in luxury, effortlessly and without compromise, conquering the most challenging terrain to enjoy life’s most enriching experiences, wherever they may be. For this reason, they have asked us to create a Rolls-Royce that offers uncompromised luxury wherever they dare to venture. Cullinan is that car. It is Effortless, Everywhere”, said Torsten Müller-Ötvös, Chief Executive Officer, Rolls-Royce Motor Cars.

Rolls-Royce claims the Cullinan heritage harks back to the very foundation of the company 114 years ago, two Englishmen from very different walks of life – one an aristocrat adventurer and the other an engineer par excellence – shared the conviction to “Take the best that exists and make it better”.

So much so that they joined forces to create Rolls-Royce Limited two years after they met. Their motor cars would attract those Royals and wealthy aristocrats with an adventurous streak thanks to the luxury offered by a stout vehicle that was swift and dependable. Their dependability was initially proven over rough roads during the Scottish Reliability Trials of 1907, and the Alpine Trials of 1913.

1907 was also the year that British businessman Frank Norbury successfully introduced Rolls-Royce into India by driving a Silver Ghost 620 miles from Bombay to Kolhapur, through the rough terrain of the India Ghat mountain-passes, without incident or fault. An explosion of orders from Maharajahs and Maharanis all over India ensued, and they would subsequently use their Rolls-Royces in the jungles of this vast and fascinating country.

Fast forward to the present day and the modern Rolls-Royce owner can enjoy the famous ‘Magic Carpet Ride’ off-road thanks to the integration of new technologies into the architecture key to ensuring the fundamental quality of Cullinan as Effortless, Everywhere and it began by creating the drive train.

“The drive train system we engineered for Cullinan had one key job to do,” explains Caroline Krismer, Engineering Project Leader for Cullinan. “To bring the famed Rolls-Royce ‘Magic Carpet Ride’ to all other terrains possible, while ensuring class-leading on-road behaviour in the SUV sector.”

Rolls-Royce’s celebrated Magic Carpet Ride impresses off-road as well as on-road thanks to the new lighter architecture, and the latest generation of self-levelling air suspension. Through a thorough re-engineering of the existing air suspension system and the strengthening of drive and prop shafts, the inclusion of drive to the front wheels as well as the back for the first time in Rolls-Royce history, and the complete reworking of the new 6.75 litre twin-turbo V12 Rolls-Royce engine to deliver just the right level of torque (850Nm) at the lowest possible revolutions (1,600rpm), the Rolls-Royce engineering team has ensured Cullinan will take owners to places no modern Rolls-Royce owner has travelled in luxury before. 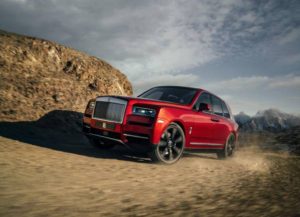 The suspension makes millions of calculations every second as it continuously varies the electronically controlled shock absorber adjustment system – reacting to body and wheel acceleration, steering inputs and camera information. A new double-wishbone front axle and 5-link rear axle deliver astounding levels of control over lateral roll and shear forces and deliver incredible agility and stability, as does the addition of four-wheel steering, all contributing to incredible drivability and nimbleness.

Your adventure begins at the touch of the unlock button on the Bespoke key, or indeed by simply reaching out to its beautifully tactile stainless steel door handle. It lowers itself by 40mm to make entry effortless as the iconic Rolls-Royce coach doors stand open to welcome driver and passengers to their adventure.

Having stepped directly into the cabin, thanks to the wide aperture of the doors and completely flat floor, driver and passengers press the door closing button to seal themselves within the sanctuary of Cullinan’s cabin. Or one touch of the sensor on the exterior door handles will see the doors automatically close themselves from outside.

A touch of the start button then elevates Cullinan 40mm to its standard, commanding ride height, placing its occupants in the perfect position from which to see the world as it drives off. The driver instantly recognises Cullinan as a driver’s car thanks to its thicker, smaller steering wheel. It’s heated, pliant rim hints at epic voyages which Cullinan is all too eager to begin, whilst heated and ventilated seats mean passengers will be perfectly acclimatised. From their commanding position at the helm of Cullinan, all equipment and technology is clearly seen and reached by the driver.

All information is clearly communicated by the latest generation of digital instruments, with the displays themselves designed with clear and beautiful virtual needles, Rolls-Royce jewellery-like chaplets and clear lettering.

The central information screen is for the first time touch sensitive, allowing the driver to quickly select functions, map views and vehicle set-up whilst on the trail. This portal can still be controlled from the iconic Spirit of Ecstasy controller which nestles on the central console with the ‘Off-Road’ button, Hill Descent Control button and Air Suspension height adjustment controls.

For those not behind the wheel, the world’s most spectacular scenery is to be seen from a privileged position. Those in the rear sit higher than those in the front of the car on Rolls-Royce’s Pavilion Seating, enjoying grandstand views of their surroundings thanks to the large glazed area of Cullinan’s side windows and industry-leading panoramic glass roof. And if they wish to locate themselves or their latest far-flung discovery, they can zero in on their location on the rear touchscreen map. 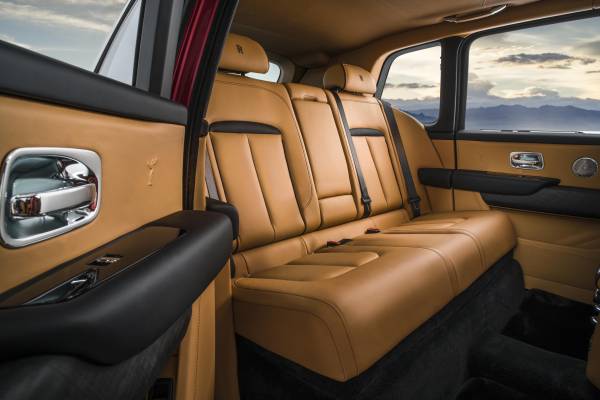 Also, no photographic opportunity will be missed as all electronic devices can be charged via the five USB ports around the cabin, whilst phones can be wirelessly charged in the front of the cabin.

The rear passenger compartment of Cullinan has been designed to offer the best seat in the house for the owner’s particular needs. Two rear configurations are offered – Lounge Seats or Individual Seats. 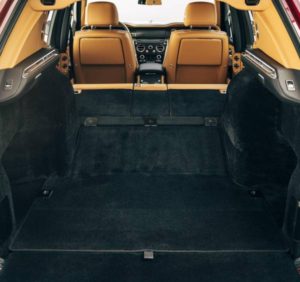 The Lounge Seat configuration is the more functional of the two options. With space for three passengers in the rear, it will likely be more attractive to families. The rear seats also fold down – a first for Rolls-Royce. The seats fold electronically in a number of configurations by pressing the appropriate button in the boot or rear door pocket. One press sees each backrest effortlessly fold down, whist at the same time moving the headrests upwards to avoid making an imprint on the seat cushion. Both seat backs can be folded completely, creating a flat load area or in a 2/3 and 1/3 split, increasing practicality even further. Rear passengers can still travel with a long load, or use the carpeted seat back as an occasional table on which to rest their precious personal items.

For those who intend to transport large items back from their adventures, the rear of Cullinan offers a large amount of space in different arrangements. The rear compartment or boot area offers a standard 560 litres of space, growing to 600 with the parcel shelf removed. Furthermore, the base of the rear seats sits higher than the boot floor, so even with both rear seats folded, the items in the boot cannot slip forward and are safely contained, unlike in any other SUV.

But for those wishing to carry a long item back from their trip to the local hardware store a loading length of 2245mm and load capacity of 1930 litres is accessed by electronically raising the boot floor to meet the seat base, allowing the item to slide through effortlessly. 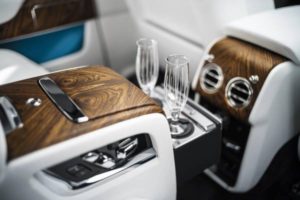 Knowing that the Rolls-Royce customer expects to bespoke his or her Cullinan, a second rear configuration is offered. The Individual Seat configuration is for those who value the ultimate luxury an SUV can offer over practicality. The two individual rear seats are separated by a Fixed Rear Centre Console incorporating a drinks cabinet with Rolls-Royce whisky glasses and decanter, champagne flutes and refrigerator. The seats also move in a number of planes to offer ultimate comfort whilst travelling in the rear.

One final feature brings Rolls-Royce’s ultimate level of luxury to this configuration of Cullinan, creating the first truly “three-box” SUV. Inspired by the age when one never travelled with one’s luggage, a glass partition isolates the passenger cabin from the luggage compartment, creating an inner ecosystem for the occupants. In addition to enhanced and class-leading silence within the cabin, a further benefit becomes clear in the hottest and coldest of environments. Thanks to the sealed cabin created by the glass partition wall, the occupants can remain in the optimum temperature even when the luggage compartment stands open. 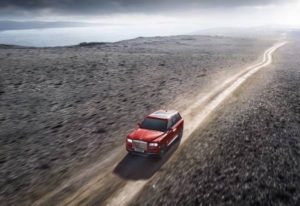 Arriving at their remote destination, the occupants can descend without dirtying their trouser legs or skirt as both front and rear coach doors wrap low under the sill of Cullinan, ensuring that all dirt remains on the outside of the door. Apparently a feature only Rolls-Royce would have considered, but something I noted when I test drove the Audi Q5.

Rolls-Royce not only gets you to your remote destination in the ultimate luxury, but ensures you will have something to do when you get there with the Rolls-Royce Recreation Module.

Imagine the scene. Having chosen your adventure you call down to your garage. “Jason, we’re going to go drone racing today. Can you load the Drone Module into the Cullinan?” Downstairs, Jason selects the Drone Racing Module from the rack containing several other Recreation Modules that the owner has had commissioned from Rolls-Royce to satisfy his or her preferred recreational pursuits.

Fly fishing, photography, rock climbing, snowboarding, kite boarding, base jumping (well this is the Roll-Royce for the younger folk!), or simply sitting and taking in the view, anything is possible thanks to the Rolls-Royce Bespoke Collective. Easily slotted and plugged into the boot of Cullinan, each Recreation Module contains a motorised drawer housing the equipment and paraphernalia specific to each Cullinan owner’s pursuits. When the owner is ready to play, it presents itself.

In true Roll-Royce fashion the designers have left no stone unturned when it comes to creating a car and the Cullinan can truly be called the world’s most luxurious SUV.