Lotus is a marque on the move. The Chinese automotive company Geely have recently purchased Lotus and it is hoped their management style with Volvo, inject cash and hands-off, will be repeated with Lotus. 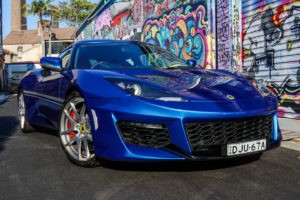 The Lotus Evora is equally comfortable on city streets or the track. Photo by La Lente Photography

The current top model in the Lotus line-up is the Evora Coupe. The Evora 400 is the 2+2 model variant, while the Evora 410 is the lighter and more powerful two seater alternative.

The Evora 400 is the successor to the Evora S and more than two thirds of the car is new. Power has increased by more than 15%, while weight has been reduced by 22kg resulting in a six second plus improvement in the lap time around the Lotus test track.

Of the Lotus range, the Evora is the most luxurious and easiest to live with on a daily basis. Standard features include heated seats, reversing camera with rear park assist, Alpine satellite navigation, Bluetooth connectivity for audio and phone and a boot big enough for a small stroller or your shopping or better still a weekend away. 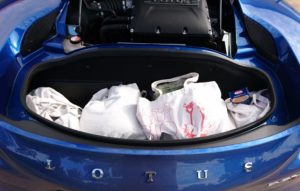 The ride height of the Evora is such that you do not wince every time you see a speed bump and the lower door sills mean it’s easier to get in and out of as well.

The Evora 400 is a mid-engined sports car, but boasts a 2+2 seating configuration. Even though the back seats look more comfortable than those offered in the Porsche 911, nobody over 140cms tall is going to fit back there. I was looking forward to taking my children for a drive in the Evora, but once I installed the car seats my seven year old son could not fit in without twisting his head to the side.

You could use the back seats if you had two children under the age of four, but the seating position for those in the front would always be compromised. An alternative is you disengage the passenger side air bag, put the passenger seat fully back and install a rear tethered car seat through to the back anchor point.

The interior of the Lotus is a pleasant place to be. The seats are comfortable despite the fact they only have manual recline and forward/back action. The leather interior (a $AUD7,650 option) is lovely and appeared to be wearing well on my test car that had almost 10,000km on the clock. The leather colours available include Ebony Black, Tan Brown, and Venom Red.

In addition to being a liveable daily sports car, the Evora 400 also doubles as your ‘other’ car. The car you smile at as you open the garage door, the car you choose for a special day out driving or the car you take to the track and drive hard. 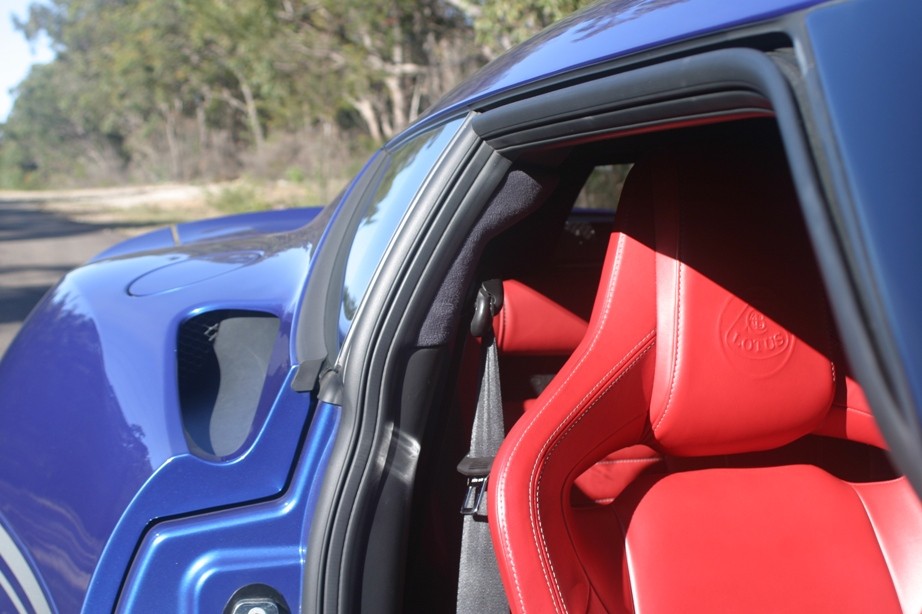 The Venom Red leather interior of the Lotus Evora.

Lotus actively encourages you to experience your car on the track. I was told by one Lotus owner that the Australian Lotus community are a very welcoming bunch of men and women and at a recent Lotus only track day more than 70 cars attended.

If track work is something you are keen to undertake in your new Evora, Simply Sports Cars (the Australian importer of Lotus) can oblige with at least one event per month for you to participate in. These include the invite only Burrows Drive Days where they have a permanent booking at every event.

Other events between now and the end of the year include a Lotus Only Track Day in August where more than 50 owners will be attending and the Targa High Country Lotus Tour in November with more than 20 other Lotus owners. 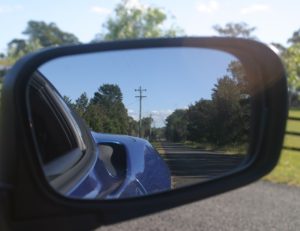 Also in November is Challenge Bathurst an event that gives everyday drivers an exclusive opportunity to drive their own car around the famous Mount Panorama Racing Circuit. Or if endurance driving is more your thing why not enter the 6 Hour Production Series.

Does track work void your three year warranty? Yes, if your car is being used in a competitive manner. Lotus doesn’t consider casual track days as being a competitive environment.

At this year’s Targa Tasmania Lotus had great success in the GT2 and GT Sports Trophy competitive classes, which demonstrates the racing pedigree underlying Lotus cars.  The Lotus Exige sports car driven by Paul Stokell and Jenny Cole secured fourth place in GT2 and fourth outright for the rally in their first competitive outing in an Exige. 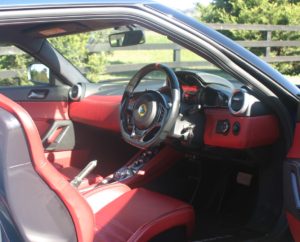 The Lotus Evora has a lovely driving position.

Driving your Evora on the track would enable you to truly appreciate the 3.5 litre V6 engine sourced from Toyota and tuned by Lotus to suit the level of performance of their vehicles. Tuning includes adding an Edelbrock supercharger, charge cooling, and upgraded engine control unit (ECU).

The dual mode exhaust creates a soundtrack that matches the excitement of the car’s acceleration. Listen here for yourself.

There are three driver selectable modes being Drive, Sport, and Race. Drive mode is for cruising around the city. Sport mode increases the fly by wire throttle sensitivity, puts the exhaust mode into loud and increases the threshold of slip. While Race mode deactivates understeer detection and allows oversteer or so I’ve been told as my test didn’t include any track work.

The vacuum actuator as seen from the rear view mirror.

Easily my favourite feature about the Lotus Evora was the view of the engine both from outside and inside the car. When you look in the rear view mirror you can see the vacuum actuator moving and the top of the Lotus engine.

The rack and pinion steering box with hydraulically assisted steering tuned by Lotus is a delight. The gear selectors are mounted on the wheel; these are a bit flimsy feeling and would be far nicer to touch if they were metal or carbon fibre.

The six speed automatic transmission is also sourced from Toyota. It’s an Intelligent Precision Shift automatic with paddle shifters. But on more than one occasion in ‘manual’ mode the gearbox refused to up shift for me on hard acceleration.

On my return the technicians ran a systems check of the vehicle and no error codes showed. They also did some test driving and found nothing wrong. So it was just me getting used to finding the sweet spot of the gearbox.

While driving in auto mode with the engine set on Sports mode the box wanted to hunt around for a gear and I felt like I wanted to override the one it eventually selected. The automatic gearbox was the only disappointment I had with the Evora. I’m sure the six speed sports ratio manual transmission would be far more satisfying to use.

The brakes are two piece AP Racing four-piston calipers (front and rear), with ventilated and cross-drilled rotors. The Evora has Electronic Brake Distribution and a Lotus/Bosch tuned anti-lock braking system. 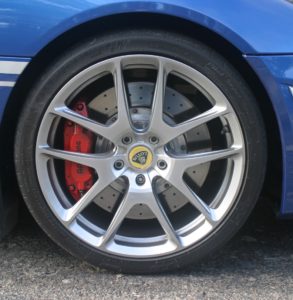 My car was fitted with the optional silver 10 spoke forged alloy wheels (a $AUD6,118 option) with 19” fronts and 20” rears and Michelin Pilot Sport tyres. I was informed these tyres easily last more than 40,000km even when using your car for some track work. I found they wanted to track in the ruts in the road, but other than that they were mighty capable.

Styling of the lightweight composite body panels and aluminium bonded chassis is classic sports car if you ask me and from every angle it’s beautiful to look at. The punters around Sydney agreed with me as well with many thumbs up received while I was on my travels.

Under that gorgeous skin is a fully independent forged aluminium double wishbone suspension system with anti roll bar and Bilstein high performance dampers with Eibach coaxial springs. All of which do a fantastic job keeping the car balanced through the corners. 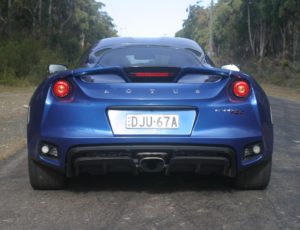 The Lotus Evora 400 automatic starts at $AUD194,990 ($AUD184,990 for manual) plus on road costs, as tested it was $AUD213, 105 plus on road costs. Additional options included cruise control ($AUD1,684) and metallic and signature paint in Essex Blue ($AUD2,753). You could look at the Lotus Evora as an expensive rival of the Porsche 718 Cayman or cheap rival to the Porsche 911, but with a better soundtrack than both.

The small scale nature of the Lotus operation in Australia allows you to develop a personal relationship with the Sales and Service Teams at your Lotus dealership. They care about your experience as an owner as well as the Lotus you are driving.

All of my friends who saw both the Lamborghini Huracan Spyder and the Evora 400 said they preferred the Lotus and I agree with them.

Even though the Lamborghini is a brilliant car, the Evora really is the best of both worlds. A sexy capable sports car with enough practicality that you would always enjoy the drive, whether to shops or around the track.