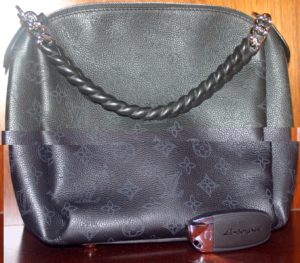 How about a Lamborghini to go with your Louis Vuitton?

By and large in the world of fashion cheap mass produced items come from Asia and exquisitely designed couture comes from Europe and in particular Italy. The same can be said for cars with a company like Lamborghini being the equivalent of Gucci or Prada.

Like a fine pair of shoes; something expensive and stylish may look great, but not be that practical for everyday use and the same can be said about supercars. The car we drive is our ultimate fashion accessory, but one many women do not consider all that important. When it comes to cars men are far more fashion conscious than women.

The Lamborghini Huracán LP 580-2 Spyder is one such potential every day supercar. The seats are relatively comfortable and the ride is not back breaking. The electro-mechanical power steering isn’t too light or heavy, vision is OK and you have most of the comforts of a well specked German sedan. 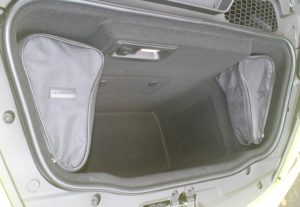 The Lambo boot is in the front and not all that big.

On the downside, there is limited stowage in the cabin, just some shallow areas in the door and a place for your phone in the centre consol. The front boot is deep, but a laptop bag and your gym gear would see it full to the brim. There would be no trips to the supermarket for your weekly shop with Huracán that is for sure.

Not to mention you will find yourself being chased by school children down the street or being filmed by exuberant passing drivers who haven’t seen the You Tube videos where this results in them running into the supercar they are trying to film.

The Huracán easily handled freeway driving and was far more relaxed in the city traffic than I was. Driving a supercar in city traffic is daunting enough, but when the car is 2.2 metres wide and driving on 20” rims that cost almost AUD$10,000, you are always keeping an eye on the distance to the kerbs. 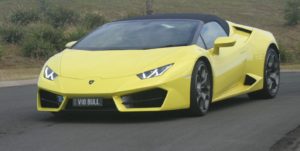 The Huracán Spyder looks great with the top up or down.

The seven speed dual clutch gearbox Lamborghini Doppia Frizione (LDF) is breathtaking. The gear changes are so fast and smooth you barely feel them. When you are not driving in manual mode, the gearbox reverts to automatic mode if you do not use the column mounted gear selectors, making driving in traffic bearable.

Driving a car like the Huracán around at inconsequential speeds really is like keeping a raging bull locked in the cattle yards. With it snorting and bashing it’s head on the gate waiting to get out and unleash its full potential. So for your daily commute it would be an underwhelming experience in my opinion, unless your commute included an awesome driving road like that between Nowra and Moss Vale or <insert your favourite B-road route here>.

This really is a car for your favourite driving roads as long as those roads are smooth and do not contain pot holes. Because the Huracán does bottom out even on bumps that you do not even notice.

The LP 580-2 is the rear wheel drive (RWD) variant in the Huracán range. So all 426kW of power and 540Nm of torque from the gloriously sounding, high revving, naturally aspirated 5.2l V10 engine are going directly to the rear wheels. 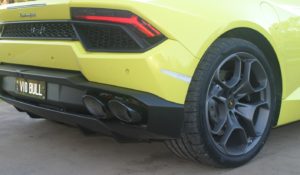 Just look at the size of those rear tyres!

Lucky then that the rear tyres are over a foot wide. Every time I looked at how wide the rear tyres were I laughed. In fact, the Huracán is very much a smile inducing car. No matter what angle you look at the Huracán from, it is visually stunning. With lines like a finely cut bright yellow Italian suit (officially the colour is known as Giallo Tenerife). You really can’t drive the Huracán without a massive smile on your face.

Huracáns are fitted with a three way Adaptive Network Intelligence MAnagement (ANIMA) system. ANIMA means ‘soul’ in Italian and the toggle switch at the base of the steering wheel allows you to select how soulful you want to feel. Strada for schlepping about town, Sport for more noise and slidey action, and Corsa for the track. 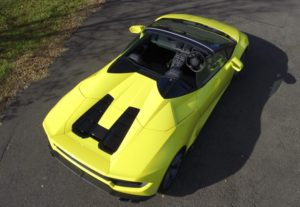 The surround sound top down experience.

The Huracán Spyder frame is constructed from hybrid aluminium and carbon fibre. This keeps the car feeling taught even on tight and twisty mountain roads driving with soft top down. The electrically foldable thermo and audio insulated soft top roof takes just 17 seconds to deploy and you can do this at up to 50km/hr. So you can get up close and personal with the sonorous engine!

But the stowage of the roof means you can’t see that beautiful engine. When you pop the hood all that is visible is the air filters and oil tank. So there’s no ogling the V10 power plant over champagne with your friends in the garage. 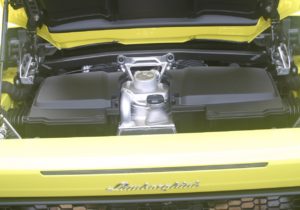 Another problem with the top down experience is how cold the cabin gets. At anything over 80km/hr a cold wind circulates in the centre of the cabin and no amount of hot air from the air conditioner or heated seats was able to overcome this.

I would say then, that you would only drive with the top down in warmer temperatures. But in Australia this would result in you being burnt to a crisp. Also if you were anything over 180cm tall you would be feeling the wind in your face not just your hair because your head would be above the windscreen.

Official fuel consumption figures for the combined cycle are 12.1l/100km. As per usual these are not comparable to real world consumption. My combined figure for urban/highway/spirited driving was 22l/100km and even being gentle on the loud peddle would only see this drop to mid-teen consumption figures.

To aid fuel preservation the Huracán is fitted auto start/stop function, which was immediately turned off when I got in the car. Also while driving on the highway I did notice that the cylinder deactivation kicked in as well. 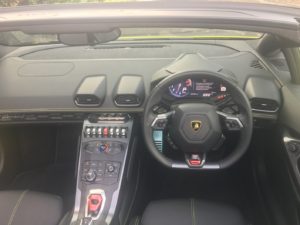 The beautiful interior of the Lamborghini Huracán.

The interior of the car is an event in itself once you have lowered yourself into the seat. Entering and exiting the car is not an elegant process and not something to be attempted while wearing a short skirt. The Huracán is less than 1.2 metres tall and getting into a normal car after driving it feels like you’re in an SUV.

Starting and stopping the Huracán involves flipping up the fighter jet style start/stop button, just one of many hexagons inside the car. I liked the styling of the switches and felt they were all where you would expect them to be. Annoyingly though you had to hold the roof folding switch for the entire time the roof was going up or down. I think a one touch system would be better here.

The Huracán I drove had Nero Ade (black) interior with smooth black leather seats optioned with contrasting stitching (AUD$1,000). Along with the branding package (AUD$1,400) which includes the Lamborghini crest embroidered on the headrest and a chromed Lamborghini logo on the passenger side of the dash.

The electronic dash is a fully configurable 12.3” liquid crystal display. I had mine configured with the tacho and gear indicator on the left, satellite navigation on the right and speed as a digital read out at the bottom of the screen. When you engage reverse the front and rear parking sensors and rear view camera (a AUD$5,700 option) display in place of the navigation and are an absolute must have option if you ask me. 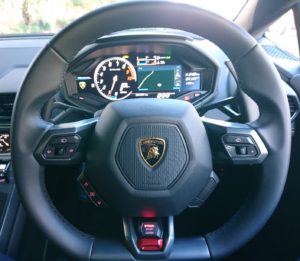 Your raging bull awaits you.

The steering wheel is emblazoned with a striking, slightly raised golden bull. The nicely shaped wheel was full leather on the car I drove, but can be optioned in suede. It has controls for the indicators, which have to be manually cancelled by pressing the toggle switch down once you have finished indicating. Along with controls for high beam, windscreen wipers and windscreen washer.

The car I drove was not fitted with cruise control and I missed this while driving on the highway. As just a small poke of the accelerator meant I was exceeding the speed limit and as you are always on high alert in the car anyway, worrying about the speed I was doing was a distraction I didn’t need.

The Lamborghini Huracán LP 580-2 Spyder starts at AUD$429,000, plus on road costs. As tested the Huracán was AUD$448,010, plus on road costs. External options included black painted brake callipers (AUD$1,800) and 20” Giano rims in titanium (AUD$9,110). The 20” rims really made the front tyres look like rubber bands, and I more than once thought I had a flat tyre because of them. 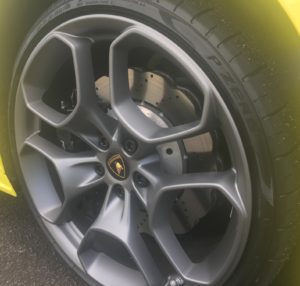 I drove the Lamborghini Gallardo LP550-2 a couple of years ago on similar roads to where I tested the Huracán. In comparison the Gallardo had hard seats, heavy brakes and the air conditioning didn’t work all that well and I also had trouble with the starting sequence. No such problems exist with the Huracán and it is a vastly superior car.

The RWD Lamborghini Huracán may be slower than the AWD version, but I really don’t think you will care about that when you are exiting your favourite corner. I would opt for the coupe rather than the spyder, but this is just my personal preference.

The Lamborghini Huracán RWD Spyder is an everyday supercar contender and like wearing fine shoes, the impracticalities can be overcome. The styling and V10 engine would ensure you are constantly reminded you are driving a very special car. And you will always arrive at your destination brandishing that customary Lamborghini grin!